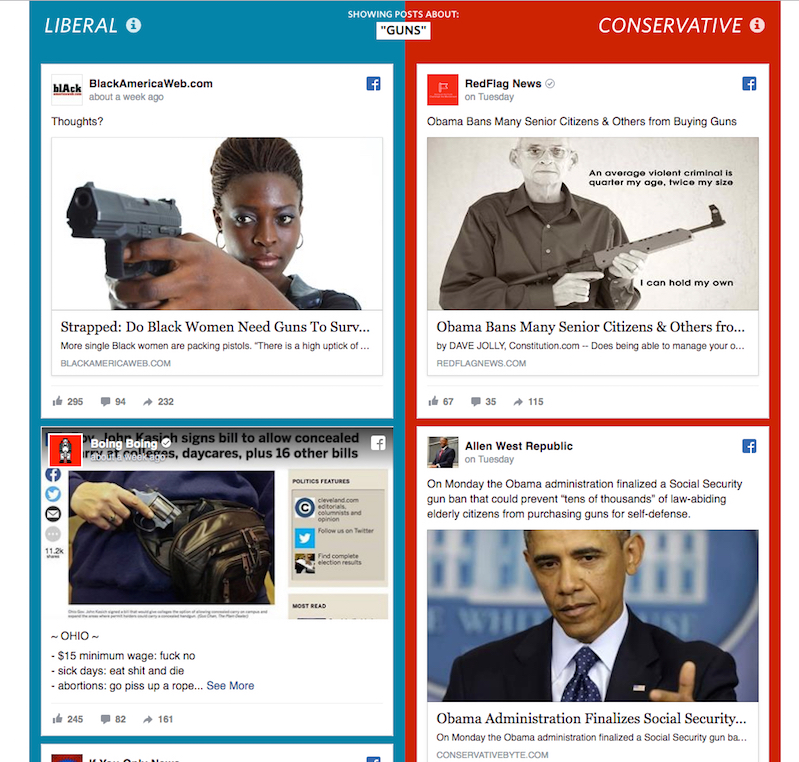 One of the most compelling data visualization projects from this year was Wall Street Journal's Blue Feed, Red Feed, which lets readers see exactly how divergent social media feeds have become, depending on someone's media diet. By coincidence, I capped an example that puts Boing Boing in their blue feed column.

Facebook's role in providing Americans with political news has never been stronger—or more controversial. Scholars worry that the social network can create "echo chambers," where users see posts only from like-minded friends and media sources. Facebook encourages users to "keep an open mind" by seeking out posts that don't appear in their feeds. To demonstrate how reality may differ for different Facebook users, The Wall Street Journal created two feeds, one "blue" and the other "red." If a source appears in the red feed, a majority of the articles shared from the source were classified as "very conservatively aligned" in a large 2015 Facebook study. For the blue feed, a majority of each source's articles aligned "very liberal." These aren't intended to resemble actual individual news feeds. Instead, they are rare side-by-side looks at real conversations from different perspectives.

This was the project that really crystallized the problem for me, long before everyone was tossing around "fake news" and "post-truth." Search by topics like Trump, Obama, Clinton, ISIS, abortion, and guns. It's shocking to see the Red Feed is still slagging on Clinton just as hard as before the election.