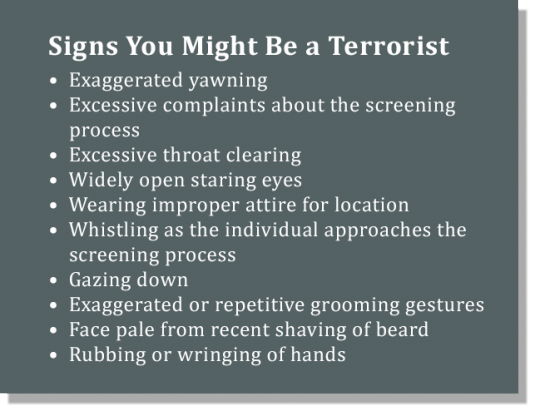 In 2013, the TSA blew $1B on "behavioral detection," which would allegedly train agents to spot potential terrorists by looking for a hilariously stupid list of "tells" including "a bobbing adam's apple," "arriving late," "trembling," "yawning," "excessive throat clearing," "improper attire," "gazing down," and "wide open staring eyes," Also: "being in disguise."

The ACLU sued the agency to force it to cough up its internal documents on the program, which the GAO had already condemned as junk science. The TSA dragged its feet, even as it mocked the people who worried about the program in its internal publications.

At the same time, Disney worked with the TSA to train its Disney World mall cops on the method, and towns like San Bernadino spent millions on their own version of the program (and managed to miss their own home-grown terrorists).

Now the ACLU's lawsuit has ripened and borne fruit: a trove of internal TSA documents that confirm what confidential TSA sources had been saying for years: the behavior detection program is just a "catch all" list of traits and behaviors that let the TSA racially profile and otherwise harass people while cloaking themselves with (pseudo)scientific respectability.

In requesting the documents, the ACLU asked to see any scientific research behind the behavior detection programs. It appears there was none, beyond previously published articles of questionable relevance to the TSA program.

“We got back a ton of academic literature and press articles that don’t provide a scientific basis for the program, and materials from other parts of the government that don’t provide any kind of credibility because they simply aren’t appropriate for airport screening, such as military studies from war zones,” Handeyside said. “The TSA simply has nothing in its files that would suggest that it can validly use these techniques to screen passengers in an unstructured environment like an airport terminal.”

Some of the materials the TSA turned over rely on problematic assumptions. One TSA presentation from 2006, titled “Femme Fatale: Female Suicide Bombers,” says that “females tend to be more emotional and therefore easier to indoctrinate.”