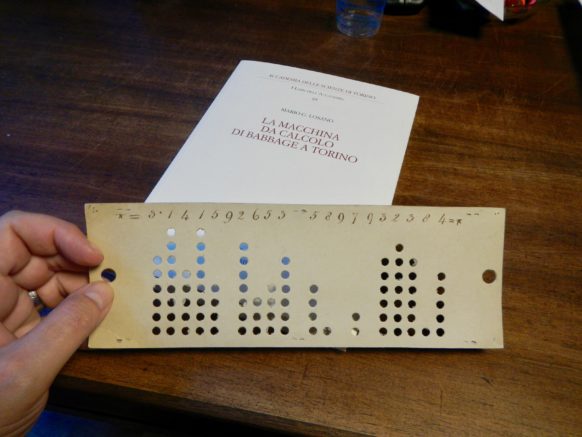 Bruce Sterling's been playing with a stack of hand-punched cardboard cards created in 1840 by Charles Babbage as a kind of vaporware app for his never-built Analytical Engine; they were intended to placed in a revolving "six-sided prism."

Sterling analyzes and gives some context and conjecture to the deck, and offers an accompanying Flickr set of photos showing the cards and Babbage's hand-written annotations.

I can’t believe that these merely happen to be random cards that Babbage somehow swept off his desk and then hauled all over Europe. Charles Babbage was an extremely methodical guy.

The cards are not numbered, the have no apparent sequence, and they are of different sizes and materials. It may also be that some have gone missing with time. Still, I think they are a meaningful and deliberate set of closely-related cards, and that they all have one purpose. I am very much wondering what that was.

I can offer a few hints.

First, the long card with the smaller punch-holes is a “number card,” while the many smaller and squarer cards are “operations cards.”

The number card has “Pi” on it, and you’ll note that the numbers of Pi correspond to the pattern of punch-holes in the columns beneath them on the card. That card is not a way to calculate Pi, it’s actually the number, Pi, used as a constant, which is readable by a difference engine.

Charles Babbage left a computer program in Turin in 1840. Here it is. [Bruce Sterling/Beyond the Beyond]