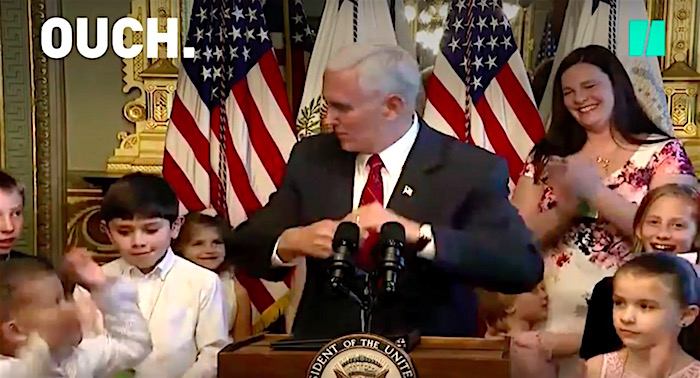 United States' top toady spent over $200K of taxpayer money flying to a football game he never intended to watch. Just another demonstration that the Trump administration continues to actively try and divide the country over race.

What I know is that the players who kneel rather than participate in the National Anthem are doing so to protest the incredible injustice suffered by black Americans on a daily basis. The US method of policing appears focused on killing them out of hand. The President and Vice-President of the United States seem bent on turning this protest into something about disrespecting our nation's veterans and service people. These things are not connected. The National Anthem and US Flag symbolize us all, and our freedom to do things like protest police abuse. This entire line of reasoning is smoke and mirrors.

The cost of carting Mr. Pence and his entourage to Indianapolis, so the VP could not attend the game, is estimated by CNN at over $200k. Apparently Pence had the press wait in the bus, because he didn't intend to stay at the game very long and had already planned a fundraiser in California that taxpayers had to pay to fly them all back to.

Mike Pence travelled to Indianapolis today to watch the Colts play the San Francisco 49ers with the pretty clear knowledge that at least some 49ers players would take a knee in silent protest during the national anthem. (The 49ers are Colin Kaepernick’s old team.) After some did, Pence made a great show of walking out on the game and tweeting out his outrage at the players and commitment to the flag, America, the anthem, soldiers and unity.

The Vice President’s press office followed up with this statement …

"I left today’s Colts game because President Trump and I will not dignify any event that disrespects our soldiers, our Flag, or our National Anthem. At a time when so many Americans are inspiring our nation with their courage, resolve, and resilience, now, more than ever, we should rally around our Flag and everything that unites us. While everyone is entitled to their own opinions, I don’t think it’s too much to ask NFL players to respect the Flag and our National Anthem. I stand with President Trump, I stand with our soldiers, and I will always stand for our Flag and our National Anthem."

The pretty transparent upshot of all this was that the White House feels it needs to keep the ‘ungrateful black players won’t honor our flag or our military’ storyline going for yet another week. (Pence flew last night from Las Vegas to Indianapolis for this and is about to fly back to California for a fundraiser, a whole almost cross country trip just to make this stunt possible.) It is conspicuous how Pence preaches the need for national unity while he and the White House continue transparently to exploit what they believe is the political value of heightening division.

But even here, Trump couldn’t help but jumping in to make clear that he told Pence to do this, relishing stamping Pence as the toady he no doubt is.