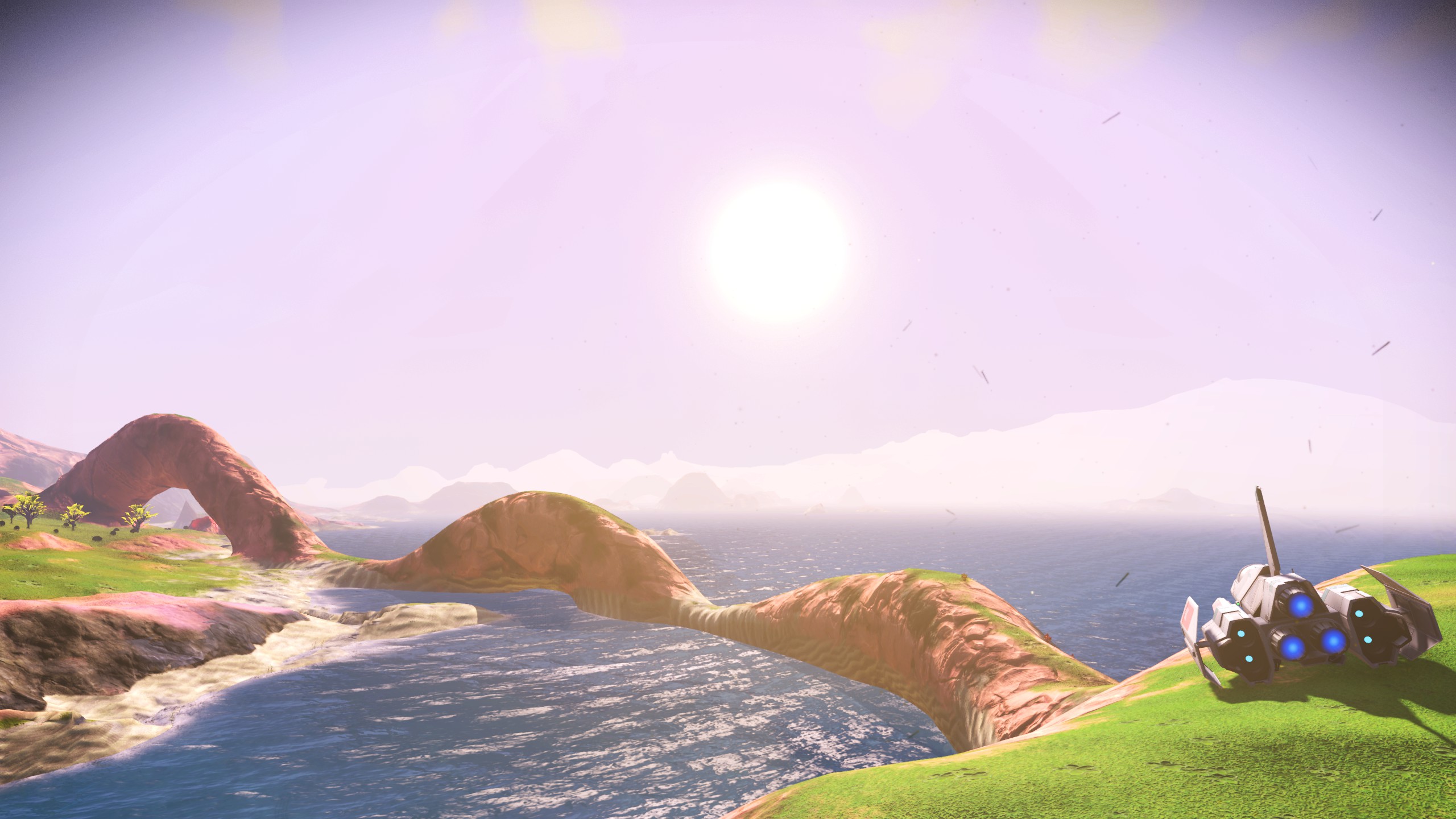 Overtaking the sunset, I glide into the mesosphere hours ahead of darkness. Scattered islands beckon under shifting banks of white stratus. I veer toward one but lose sight of it in the clouds, emerging over an isthmus broad and gray in the oceans of Lahellt II. Knuckertail soars down and I land her upon a grass-topped arch, coiled slender and ominous over the shallows like an immense fossil.

After visiting a hundred vicious worlds, frozen or burning, gassing me with oxides or crackling with radioactive menace, I think I've found home. Dropping from the canopy to make footfall, I look at the glittering sea. A world warm and quiet and mine declares itself to the exosuit's sensors.

No Man's Sky is a spectacular toy for exploring 18 quintillion uncannily similar worlds. Released a year ago to astronomical hype and sour reviews, it's since become a decent (and improving) game as its creators bolt on base-building, factions, planetside vehicles, narrative threads and evocative if slight multiplayer elements.

As of the Atlas Rising update, it's widely hailed as a much more involving journey. But for me, it's neither one thing nor the other. The procedurally-generated worlds still lack depth and intrigue, limiting the appeal of exploration, while the gamery additions call for endless self-directed fetchquesting to make progress. Tweet-length nibbles of story string one instantly-forgotten Mr. Potato Head alien to the next, all immobile but for their looping busywork animations.

But the weird dream at the heart of it — jumping to distant solar systems, visiting fabulous unchartered worlds, coasting over psychedelic meadows where bizarre and ungainly alien fauna swarm — sticks with me. Get a glimpse of what we hope our descendants will spiritualize on other worlds, knowing we'll never experience it.

See, then there's the fiddly travel, maddening inventory management, and grinding repetitions. The generated worlds are smoothed noise with no suggestion of geology, nothing hot under the surface. Everything has a meaningless alphabetti-spaghetti name. Though every world is flavored with local color, all have the topology of a lightly whipped frosted cake, uniformly sprinkled with candy bits from the same jar. There are no cities or civilizations, no gas giants, no balls of boiling lead, no forests or fens. Just lots of porta-potties, abandoned prefabs, and glowing relics.

What's the point of going anywhere I want if the same things are everywhere?

This problem afflicts the flora and fauna too. Though adorable and strange, they're a roll of the dice with no suggestion of ecology, adaptation or habitation. Nothing connects to anything. Darwin would return to England certain both of God's hand and His zero fucks given.

Sentient aliens are, like the dumb ones, a hodgepodge of parts with no personality and nothing to remember them by. There are three species, hints of political backdrop, and actions and events described in dialog, but nothing is seen to happen or change.

More interesting are the tech tree and trade elements, especially the elaborate bases you can build and the ships you can buy, should you have the determination to earn them. Making a home, a career and a pile of money kept me going for twenty or so hours after I bored of visiting new planets — the key difference between No Man's Sky in late 2017 and last year — until I realized the next objective on my list might take twenty more.

The ships are the coolest thing about No Man's Sky, the hard steel heart of its splendid late-seventies aesthetic.

Space battles are dumb fun, especially once you have some power-ups. The pleasure of flight is occasionally marred by shifting and glitching in the middle distance, things popping into view and landforms deforming at different levels of detail. This becomes particlarly annoying when cruising low in search of specific things of interest, a constant reminder that No Man's Sky is random noise posing as empty space.

I slip down to a sloping meadow shadowed by the rock arch where Knuckertail perches. Off in the distance, a carved menhir rests at an odd angle and I skip toward it though platinum blooms and crystal hedges. Communion teaches me the Korvax word for sleep. I look back at the ship, a tiny shadow against the sun. The exosuit says it's 19˚ and balmy. As I entertain the idea of this being my avatar's homeworld, I realize that for me, it's perfect point to stop playing. Another step, and I'll just be shooting rocks again.

Besides, I see what was bothering me: there's no fauna. But for the grasses and wildflowers on this perfect world, I'm the only thing alive.

I rechristen the planet, instantly forgetting its original name, and upload the new one to No Man's Sky's mapping server so that other players may one day benefit from my discovery: "Lovely But Devoid of Life."