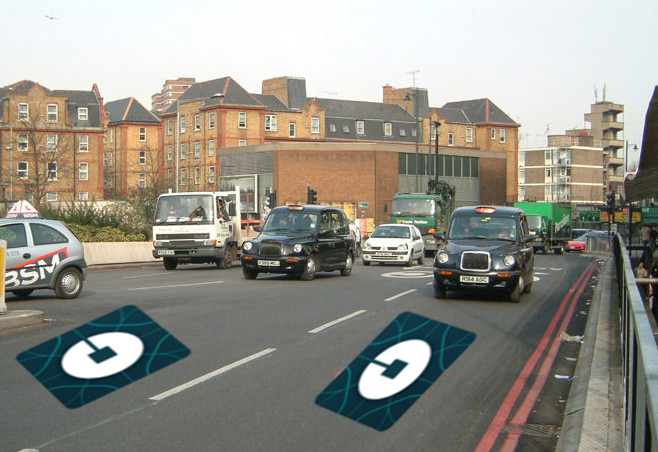 Every city where Uber and Lyft have found a foothold has also faced impossible congestion in the city center; Felix Salmon says this is because drivers are incentivized to come to the city-center despite the traffic (because that's where the fares are) and riders are incentivized to skip public transit when there are a lot of cars around to hail with their apps.

So Salmon proposes that we adopt Uber's own load-balancing tactic for our city centres: surge pricing. When the city is congested, Uber (the company, not the drivers) will have to pay a premium to enter the city. This will raise prices on rides and reduce demand (hailing-app riders are understood to be very price-sensitive and can often substitute things like walking, cycling, public transit, or putting off a journey for getting a ride in a private car).

It's got a neat symmetry to it. You wouldn't have to define congestion zones: just use Uber and Lyft's own realtime telemetry about how many of its cars are stuck in traffic: the more stuck they are, the more expensive it becomes for them to be there, the more expensive their rides would become, the more people would decide not to take Uber or Lyft, the more those cars would leave the congested zone, the less congested it would be. In effect, you'd be balancing the demand signal for cars with a counterbalancing force that downregulated the signal based on negative externalities.

The taxes raised through the system would go to improving public transit, bikeshare, and other Uber and Lyft alternatives, just like London's congestion charge.

But ultimately, this has the same problem that London's congestion fee has: it's regressive. By making it a flat fee, rather than one geared to income, the fee provides a wildly different disincentive to motorists, especially in a city as unequal as London (see also NYC, LA, SF, etc). A $16/day congestion charge can make or break the profitability of a plumber who has to drive their van into Central London to fix a toilet, but it is an infinitesimal expense for a City banker who's making more than a million/year.

Finland, famously, uses a progressive schedule in its disincentive systems: fines for moving violations are geared to your income, so a Nokia exec was once ordered to pay a $103,000 speeding ticket. Where fees, fines and levies are used to shape public behavior, they always run into this problem: either they have to be geared to income, or they present a huge problem for the vast majority and a minor annoyance to the one percent.

It's hard to imagine how you'd tax Uber more for picking up a banker than a janitor, but unless you figure that out, all you're doing is clearing the roads so that bankers don't have to sit in traffic.

Such a tax would create all the best incentives. Uber and Lyft would start charging more for journeys in high-congestion areas or at high-congestion times, reducing demand and therefore reducing traffic. (Those increased fares would not be the same as the surge pricing which currently exists, since surge pricing is designed to act as a signal to drivers that demand is high, thereby attracting new drivers to high-demand areas. Congestion-related price hikes, by contrast, would not be linked to passenger demand, and indeed would be a sign that demand was likely to fall in response to higher fares. So drivers would stay away.)

One of the big lessons that Uber has learned—and one reason why the company continues to lose money—is that its passengers are very price-sensitive. When fares go up, they travel less; when fares come down, they travel more. Now that the final fare is clearly visible in the app before you book, it’s easy to change your mind and decide not to take an Uber after all, or to share with others.