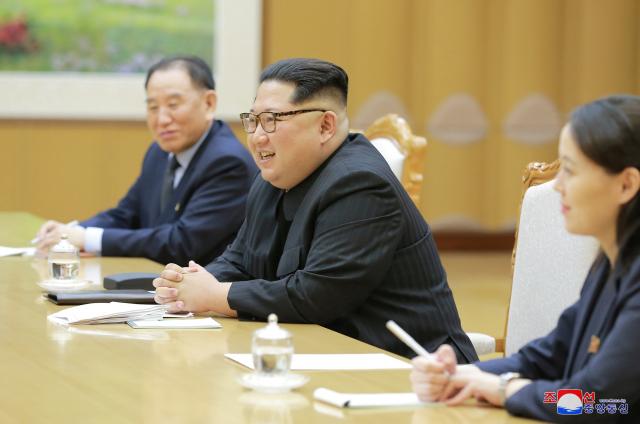 South Korea's national security adviser today announced he told President Donald Trump that Kim Jong Un says he's committed to denuclearization, and that Trump agreed to make it happen by May, as North Korea has proposed.

"He pledged that North Korea will refrain from any further nuclear or missile tests," said South Korea's Chung Eui-yong, and "President Trump would meet Kim Jong-un by May to achieve denuclearization."

The South Korean envoy was reading out the announcement on behalf of the White House? Why is South Korea announcing this? Who knows. Nothing matters.

No conditions specified, for now.

Kim Jong Un today said he is committed to total denuclearization. The talks will effectively freeze North Korea's nuclear program — the reclusive leader has agreed to suspend all tests and activities while negotiations are ongoing.

North Korea has been seeking a summit with an American president for more than twenty years. It has literally been a top foreign policy goal of Pyongyang since Kim Jong Il invited Bill Clinton. (1/3)

I wonder if Trump's "aides" have explained that to him. Or, if in their toddler-handling, they have led him to believe that this offer is something unusual. Or perhaps he imagines that only he can go Pyongyang. (2/3)

This is literally how the North Korean film "The Country I Saw" ends. An American President visits Pyongyang, compelled by North Korea's nuclear and missile programs to treat a Kim as an equal. (3/3)https://t.co/l3TqT2v8KL

PS: To be clear — we need to talk to North Korea. But Kim is not inviting Trump so that he can surrender North Korea's weapons. Kim is inviting Trump to demonstrate that his investment in nuclear and missile capabilities has forced the United States to treat him as an equal.

Chung Eui-yong takes the podium. Trump's "maximum pressure policy together with international pressure brought us to this juncture." #NorthKorea pic.twitter.com/bIPbliGaIi

That announcement had intensely weird optics. The South Koreans are shuttling between Pyongyang and Washington and speaking for both Trump and Kim Jong-un. https://t.co/0hTsVUf2TD

No sitting U.S. president has met a North Korean leader. But no North Korea leader ever had a thermonuclear ICBM. "Balance of power" attained?

what a night for @dennisrodman