U.S. withdraws from U.N. Human Rights Council, calling it 'not worthy of its name.' 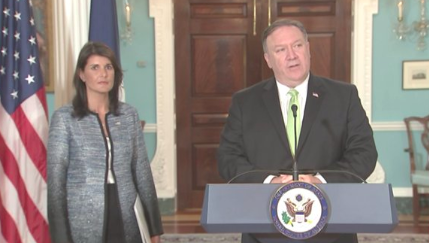 She said the Human Rights Council is 'not worthy of its name.'

This is in the same week America discovered that Trump's racist regime is tearing kids from parents at the border, then placing unaccompanied minors by the thousands in what amount to concentration camps.

At State Dept., @SecPompeo and @nikkihaley announce US withdrawal from UN Human Rights Council, calling it "a protector of human right abusers and cesspool of political bias." pic.twitter.com/biZvXFGRwu

Amb Haley says the Human Rights Council is not worthy of its name, but should it become reformed, the US would be "happy to rejoin." pic.twitter.com/lH6h3XdEL5

The United States withdrew from the U.N. Human Rights Council on Tuesday after no other countries “had the courage to join our fight” to reform the “hypocritical and self-serving” body, said U.S. Ambassador to the United Nations Nikki Haley.

“In doing so, I want to make it crystal clear that this step is not a retreat from our human rights commitments,” Haley said.

Ambassador to the U.N. Nikki Haley had criticized the council for what she called a "relentless, pathological campaign" against Israel, a staunch U.S. ally. https://t.co/rXUviYHTEV

I spoke to the last American to serve as US Ambassador to the Human Rights Council, @AmbHarper

He described how, despite its flaws, the Council advanced American interests and promoted rights around the world. https://t.co/lDiSUlUkUb