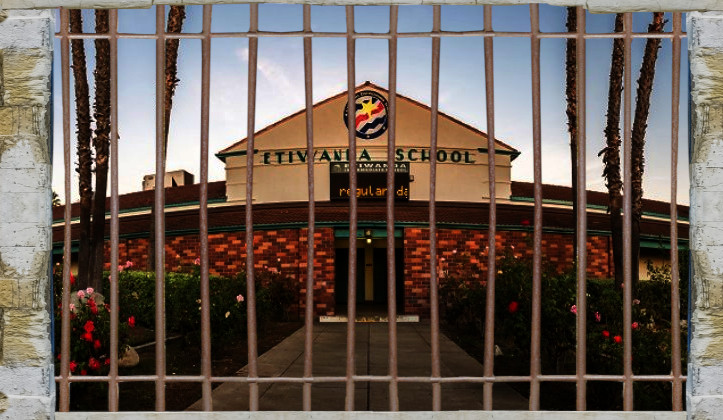 In 2013, Deputy Luis Ortiz was the "school resource officer" at Etiwanda Intermediate in San Bernardino County, California, when he arrested a group of 12- and 13-year-old girls, cuffing them and taking them to jail in a police vehicle; at the time and afterward, Ortiz said he arrested them "to prove a point" because he felt they were "unresponsive and disrespectful" and in his belief, introducing them to the criminal justice system would make them "mature a lot faster."

The girls had been involved in "ongoing incidents of bullying and fighting." Ortiz had been called in to "mediate the conflict." When he decided he couldn't tell who the victims were and who the bullies were, he arrested all of them, "within minutes."

Ortiz is the subject of lawsuits over his conduct, and he has been seeking to use "qualified immunity" (which protects individual officers from civil liability for actions taken in the course of their duties) to escape the suit.

The Ninth Circuit Appeals Court just told him to go fuck himself. The lawsuits will continue.

At the time of the students’ arrest, it was clearly established that a police seizure at the behest of school officials must, at a minimum, be “reasonably related to its purpose, and must not be ‘excessively intrusive in light of the age and sex of the student and the nature of the infraction.’” Defendants do not—and indeed, cannot—meaningfully contest Deputy Ortiz’s motivation for the arrests, which he stated multiple times. No reasonable officer could have reasonably believed that the law authorizes the arrest of a group of middle schoolers in order to prove a point.

Defendants… claim that the students’ behavior in the classroom justified the arrest because there was reason to believe the students would engage in imminent fights. That assertion is belied by the audio record of the encounter, which “quite clearly contradicts the version of the story told by” the officers. The students were mostly silent, only speaking to respond to the questions posed to them. But even taking at face value Deputy Ortiz’s claim that the girls were being disrespectful to him, and whispering among themselves, this conduct in no way rose to the level of probable cause that could have justified their arrests.

Ninth Circuit Says No, You Fucking May Not Arrest A Bunch Of Middle School Students To 'Prove A Point' [Tim Cushing/Techdirt]