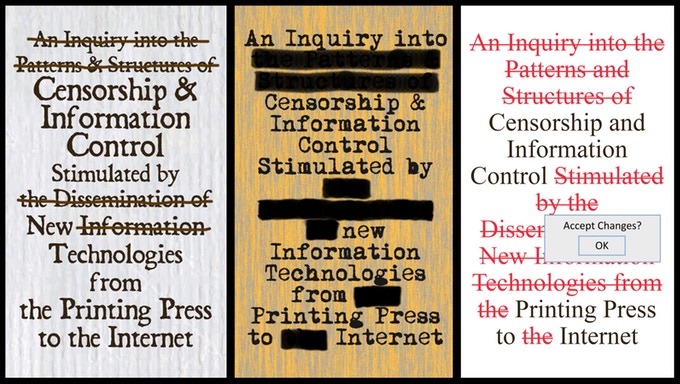 Science fiction author, librettist, singer and historian Ada Palmer (previously), science and piracy historian Adrian Johns, and I have teamed up to create a seminar series at the University of Chicago called Censorship and Information Control During Information Revolutions, which compares and contrasts the censorship regimes and moral panics that flourished after the invention of the printing press with modern, computerized efforts to control and suppress information.

We're putting on seven free, public seminars at the University of Chicago, with guest lecturers from a variety of disciplines, drawn from diverse institutions including the American Library Association Office of Intellectual Freedom, the Comic Book Legal Defense Fund, and from diverse specializations including colonial censorship in occupied Korea under Japanese rule, the Spanish and Portuguese Inquisitions, contemporary state document redaction, and the literary consequences of colonialism in Sri Lanka (to name just a few).

We're also putting on an exhibition at the University of Chicago Special Collections Research Library, displaying censored materials selected and analyzed by a team of over 30 student researchers.

We're looking to raise $5800. Premiums include printed copies of the catalog, a set of documents for you to expurgate at home (!), a redaction of your name in the official thank you page, autographed copies of the catalog, a personalized, autographed copy of one of Ada's or my novels, the ability to submit a question to the seminar, and chats with Ada, me, or one of several of our expert lecturers -- or, at the $400 level, you get a personalized tour of the exhibition with Ada.

I hope you'll help us make these open seminars even more open and accessible for people who can't make it to Chicago!

We want to create:

* A series of eight filmed conversations about censorship and information control, putting scholars of past information revolutions in dialogue with those who work on today's revolution. These videos will be made available to the public online, for everyone.

* A museum exhibit, examining the history of censorship from antiquity to the present, focusing on the Inquisition, the legacy of Orwell's 1984, and how the real activities of censors past and present differ from the way we tend to imagine them.

* A printed catalog of the exhibit, with images and descriptions of objects that help us understand censorship's long history, from theology books hand-censored by inquisitors to atomic research silenced during the Cold War.

* A book of essays written by the participants based on our shared discoveries.

* More publications, print and online, if we can muster resources to keep the project going.