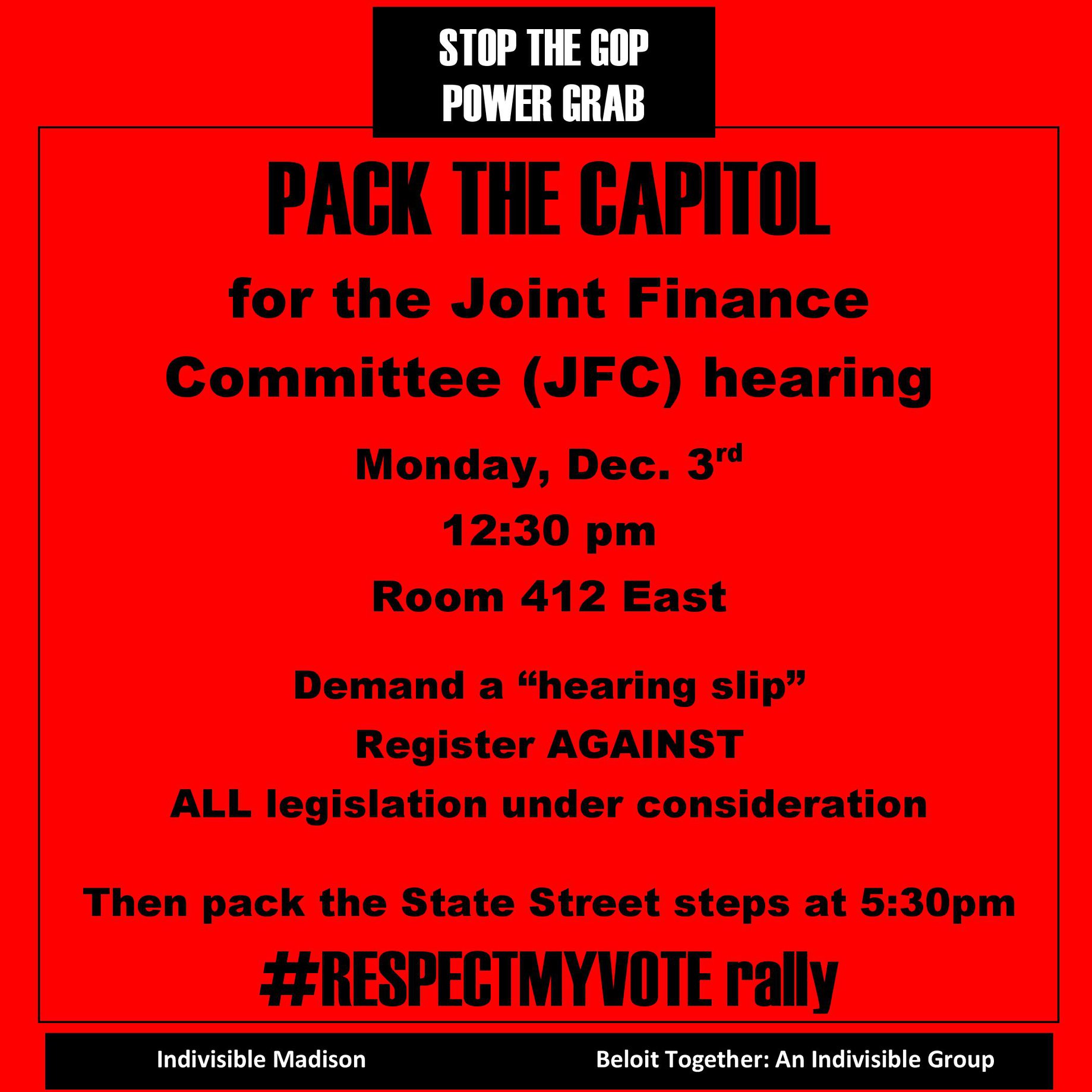 The Republican election of Scott Walker and his band of Ayn Rand cosplayers was a triumph of massive corporate spending, voter suppression and gerrymandering that meant that the votes of the majority of Wisconsinites would no longer count; despite that, last month's midterm elections saw the governorship and Attorney General flip to progressive Democrats with wildly popular platforms.

As Wisconsin's Republican legislature sits for its lame-duck session, they have unveiled a plan to steal the state again: a sweeping set of unprecedented (and even unconstitutional) legal changes that would neuter the governorship and the A-G: a ban on early voting (previously struck down by the courts); a logistically impossible shift to the next state Supreme Court election calculated to hand the seat to a far-right extremist who says that affirmative action is literally indistinguishable from slavery, defended gerrymandering, and says same-sex marriage "will eventually rob the institution of marriage of any discernible meaning"; to strip the A-G of the power to back Wisconsin out of its petty lawsuit to kill Obamacare; to strip the governor of the power to overturn the previous Governor's attempt to gut Medicare; to force the state capital to allow private persons to carry firearms on its premises.

"They gerrymander the legislature to end majority rule. They move powers from democratically elected offices to the undem legislature. They entrench by suppressing votes & protecting partisan Sup Ct justices."

Wisconsin was always pitched as a living laboratory for oligarch control by the Koch brothers and their thinktankie allies: if a progressive, egalitarian state could be turned into a massively unequal state where the will of the people could be ignored within a structure that retained the trappings of "democracy," then the whole country could follow.

Remember that the Koch ideology holds that "democracy is incompatible with freedom": the rich are a minority (duh) and in a democracy, the majority will always vote to trammel the wealthy minority's sacred right to refuse to be taxed to contribute to the public treasury and to use the savings to buy political outcomes favorable to the wealthy. In this conception, the rich are the only "oppressed minority" that democracy can never save.

These post-election coups are becoming part of the Republican playbook: in 2016, North Carolina Republican legislators voted to gut the governor of powers when the state flipped blue; in Michigan, the GOP legislature is doing the same.

Here's how to fight back: "This Monday [TODAY!] GO TO MADISON. The Joint Finance Committee hearing on the power-grab bills opens 12:30pm in room 412 East. Fill the room! Then at 5:30pm, rally outside on State St steps!"

Another key legislator for constituents to contact: Sen. Howard Marklein from District 17 (incl Spring Green), (608) 266-0703, Sen.Marklein@legis.wi.gov. Every county in his district voted for Tony Evers. They weren't voting for Marklein to handcuff their pick for governor!

Finally: here's a petition: STOP the power grab to limit the role of Governor-Elect Evers.

Wisconsin is a living laboratory, a tactical petri dish where we are learning what the American oligarch class has up its sleeve for a future in which almost no wealth remains in working peoples' hands, where waves of crisis from climate change and infrastructure neglect are smashing the country, and where no money or political will to do anything about either can be found in the halls of power. When rich America uses private roads and poor America's roads have been replaced with gravel; when public schools have been replaced with for-profit online charters that teach climate-denial in science class and the novels of Ayn Rand in literature class; when "workfare" and private prisons mean that every working person competes with slaves in a race to drive wages to zero, it will be Wisconsin that blazes the trail.

That is, unless Wisconsinites continue to show the indomitable spirit they've shown despite eight years of GOP dirty tricks, lies, and fraud:

Scott Walker (once tricked into confessing that he was a mouthpiece for the Kochs) illegally closed the capitol and banned cameras (and even planned to seed protests with agent provocateurs) so he could gut Wisconsinites' freedoms in an illegal maneuver in front of an audience of shills, while record-setting crowds marched against him, joined by legions of tractor-driving farmers, while Walker celebrated with rounds of tax-funded patronage appointments, climate denial, voter suppression and homophobic legislative efforts.

The recall drive to get Walker kicked out of office was met with dark money campaigns, illegal intimidation campaigns, the illegal destruction of documents on the relationship of dark money to Walker's regime, official lies and more lies, while Walker's most vocal anti-"voter-fraud" officials boasted of committing voter fraud to get Walker elected (takes one to know one).

Despite all this, despite a Jim Crow-grade voter suppression campaign, Wisconsites ousted Walker. They showed how principal, evidence, and pluralism can triumph over dirty tricks, intimidation, cruelty, denial and oligarchy.

Now, they have to do it again. Godspeed, Wisconsin. We're with you.