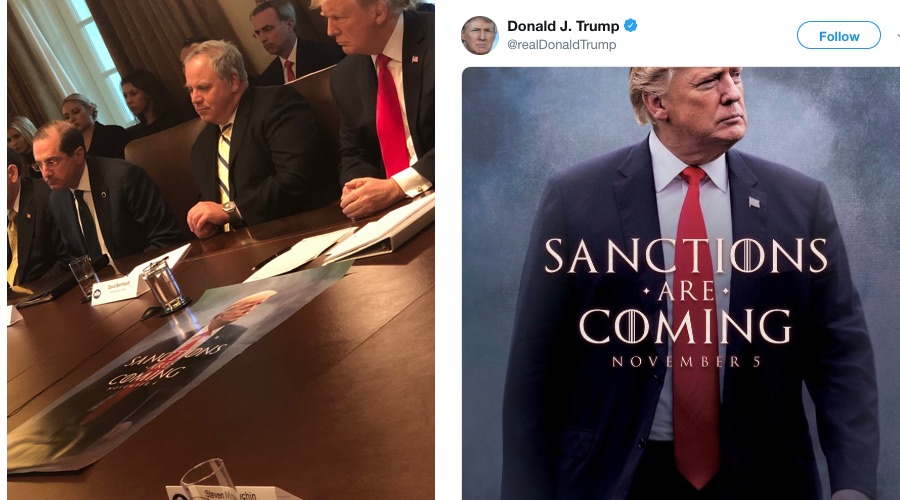 For today's Cabinet meeting at the White House, there was a weird Trump Game of Thrones political meme poster, wall sized, displaying Trump's face and those words, placed right on the middle of the table as some kind of weird creepy internet fascist prop.

Previously, Trump tweeted this meme in the context of Iran. Buzzfeed reported about it at the time.

“How do you say trademark misuse in Dothraki?,” HBO previously tweeted in response, exactly two months ago. Wonder how they'll respond to this incident, given that it is likely to go viral, and arguably cause confusion about the show.

Trump has the "sanctions are coming" poster of himself in this Cabinet meeting. This pic from @kevincorke: pic.twitter.com/ir62Nryd5W

Wall poster of Trump with the words “Sanctions are Coming - November 4” in the middle of the table for today’s Cabinet meeting. pic.twitter.com/wJ9XpcQxKA

I heard that there was a Game of Thrones parody poster on the desk during Trump's meeting, so I assumed it was about the wall that occupies like 1/3 of the plot of that book/show, and... no, it's about sanctions!

never forget ---> The Sanctions That Trump’s “Game Of Thrones” Tweet Warned About Have Arrived https://t.co/VbQ2wx06qK via @emilyctamkin

Pres has his "Sanctions are Coming" poster on the Cabinet Room conference table. It's the one with the "Games of Thrones" lettering that he used to warm Iran of forthcoming penalties from the US. pic.twitter.com/VtO8LULQDc

There is now a “Sanctions are Coming” poster on the table pic.twitter.com/dY27r08Kuk

Here's how @HBO responded to @POTUS tweeting a @realDonaldTrump/@GameOfThrones tweet 2 months ago to the day. Today, President had it on table as a prop during Cabinet meeting. (more: https://t.co/WFQRj8xkDb) https://t.co/IaZMMCZPOw

It's too bad for Trump that there are no Game of Thrones references that would in way relate to the concept of a border wall and/or such a wall's utility in defending against threats so he had to go with the "sanctions are coming" poster instead.