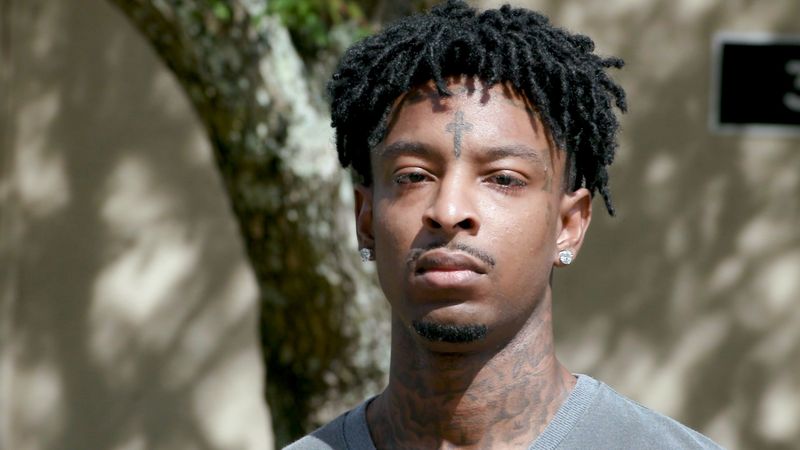 The attorney for detained performing artist 21 Savage blasts ICE in a statement the day after his client was arrested: "This is a civil law violation, and the continued detention of Mr. Abraham-Joseph serves no other purpose than to unnecessarily punish him and try to intimidate him into giving up his right to fight to remain in the US."

21 Savage is also known as Sha Yaa Bin Abraham-Joseph. He was arrested Sunday by U.S. Immigration and Customs Enforcement after ICE was informed (wonder by who?) the artist is from the UK, and has been staying in the country with an expired visa.

He is now in “removal proceedings before the federal immigration courts,” ICE told the Atlanta Journal-Constitution.

The lawyer for 21 Savage blasted ICE following the arrest of the rapper, calling his detainment a “civil law violation” solely meant to “unnecessarily punish him and try to intimidate him.”

“ICE has not charged Mr. Abraham-Joseph with any crime. As a minor, his family overstayed their work visas, and he, like almost two million other children, was left without legal status through no fault of his own,” Charles H. Kuck said Monday in a statement.

Kuck also noted that 21 Savage, whose real name is She’yaa Bin Abraham-Joseph, “never hid his immigration status from the US government.”

The Atlanta-based rapper allegedly has a pending U-Visa application, eligible for people who have been the victim of a crime. He applied in 2017 and made the Department of Homeland Security aware of his history, Kuck said.

“Yet they took no action against him until this past weekend,” Kuck said.

21 Savage was arrested Sunday by Immigration and Customs Enforcement after they learned he was actually from the UK and was staying in the country with an expired visa, the department said.

The arrest happened on Sunday, the day of the Super Bowl.

Atlanta-based rapper 21 Savage, who was arrested by ICE yesterday, came to the US as a minor and his "family overstayed their work visas" due to which "he was left without legal status through no fault of his own," his immigration lawyer said in a statement to @BuzzFeedNews pic.twitter.com/erF79DyYdX

Just because someone *arrived* from the UK doesn't necessarily mean they are a British citizen. That won't really wind up being the most important part of this case (it'll be built on criminalizing 21 Savage's more recent past to deport him) but just get the basics right.

What happened to 21 Savage is another reminder that “criminality” is a largely subjective concept. It’s not a static state of being, it’s a decision made by ppl in positions of authority to wield punitive power against certain ppl while ignoring the transgressions of others.

I'm just catching up, so please forgive me, but 21 Savage is not actually a gangster from Atlanta? He's really a nice young bloke from the UK?

If that doesn't tell you everything about how they capitalize on Black American culture...

Unsurprisingly, the Trump administration is underestimating the extent to which 21 Savage could humanize a number of immigration issues for a lot of folks who haven’t yet engaged on the issue.

BREAKING- @21savage was in the car with another rapper who was the target of a criminal arrest. 21 was taken into custody by law enforcement after they learned of his immigration status. “There is no misunderstanding. 21 Savage is a British National.”: Law Enforcement source

21 savage went from being trash to rubbish