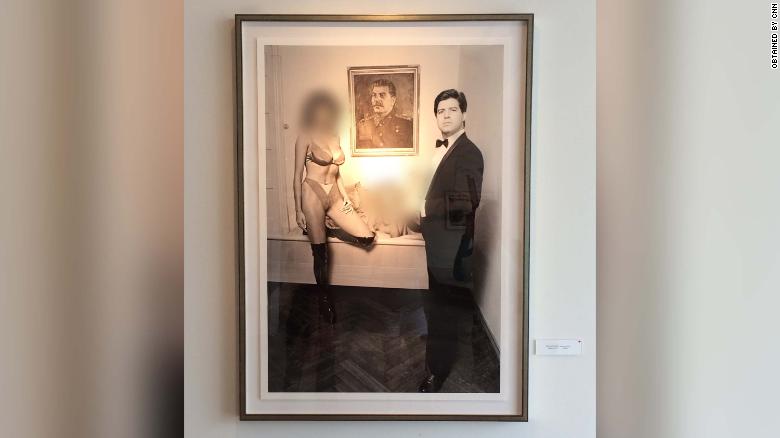 He's the guy with the half-nude woman in this photo.

CNN reports today that Senate investigators plan to question David Geovanis, an American businessman based in Moscow whose ties to Donald Trump in Russia date back decades. Witnesses told investigators that Geovanis may be able to fill in missing details on Trump's business and personal activities in Russia which are now believed to date as far back as the 1990s.

One of those two witnesses told the committee he has a photograph of Geovanis in earlier years posing in this portrait (photo above) with three partially nude women. CNN:

The portrait, once displayed in a Russian gallery under the title "The Capitalist," depicts the subjects in front of a picture of the former Soviet leader Joseph Stalin. It's not clear whether the portrait is a single photograph or a composite. The witness told CNN that they were shown the photograph during questioning.

Here's another bombshell in the CNN report:

A third witness has alleged in written testimony, seen by CNN, that Geovanis may be valuable in the mystery of whether Russia has material on Trump that could be personally embarrassing to him.

Geovanis helped organize that now-infamous 1996 Trump junket to Moscow, when Donald was in the early stages of pursuing what he apparently hoped would become a Trump Tower in the Russian capital.

Years later, Geovanis worked for the Russian oligarch Oleg Deripaska, whose ties to Trump's 2016 campaign chairman Paul Manafort have also been of interest to investigators.

Yes, this will be interesting.