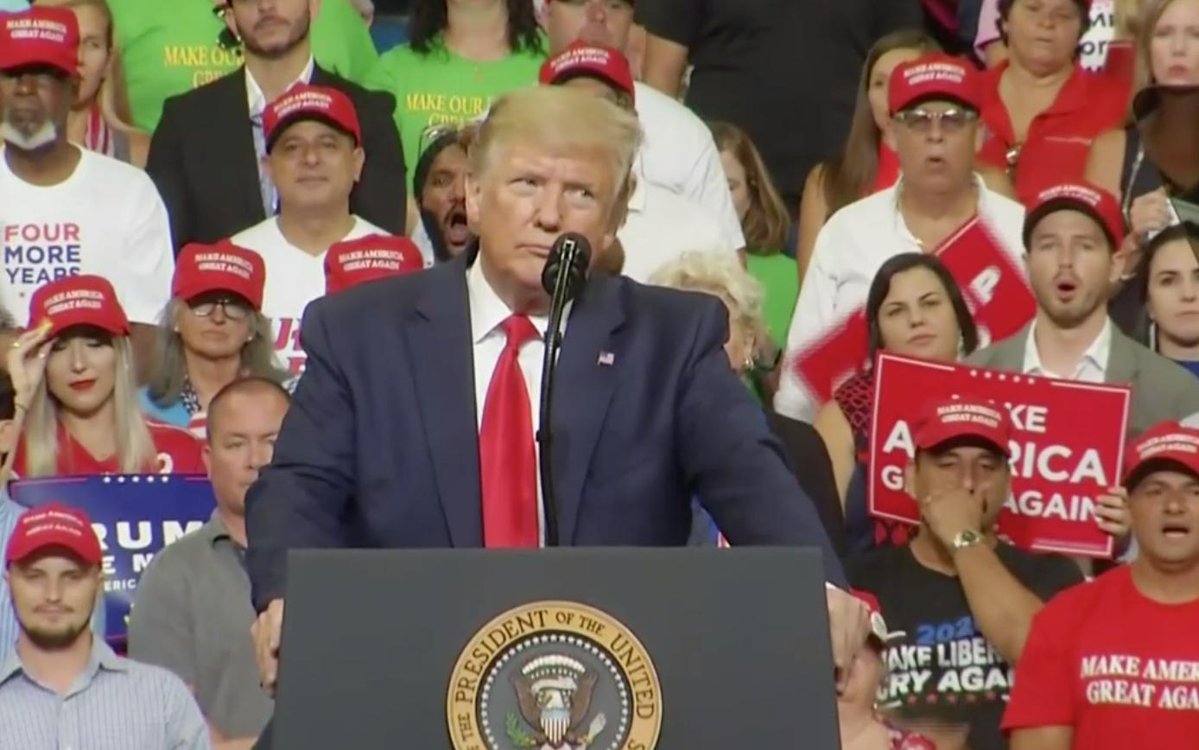 'Lock Her Up' and 'acid washed' also made a comeback in Trump's rally-rant.

“It was all an illegal attempt to overturn the election,” said President Donald Trump during a speech tonight, referring to Special Counsel Robert Mueller's report on Russia interference in the 2016 elections.

This is, of course, false.

And, Trump almost certainly has not read the report.

The President rehashed a number of 'greatest hits' from his 2016 rally, including attacks on Hillary Clinton, and urged his fans to come to Washington, DC on July 4th.

"Come on down," he says. "Bring your flags. We're going to celebrate America.”

Observations from Twitter as Trump's bizarre but predictably so hate rally aired, below.

C-SPAN is airing the House of Representatives. Trump’s reelection kickoff rally is on C-SPAN 2. pic.twitter.com/atoAsK0keh

Trump: As I said on a wonderful, beautiful day at my inauguration, we did not merely transfer power from one party to another. But we transferred power back to you, the proud citizens of the United States of America pic.twitter.com/kvhaSfrBLC

As if on cue: "Our radical Democratic opponents are driven by hatred..and rage. They want to destroy you," Trump tells the crowd. Which is of course what Democrats say about him.

Trump says he will have soon appointed his 145th judge, hitting on one of the biggest selling points with his conservative base.

This Trump speech is just devastating for Clinton’s 2020 campaign

40 minutes in, not a peep about yet about a second term agenda. And though he had full GOP control for 2 years says rigged system blocking him.

Donald Trump is still talking about “crooked Hillary” as though Hillary Clinton is still his opponent. If this wasn’t mostly reflex, you could see a certain logic here: no Democrat actually running is currently as loathed by his base as Clinton continues to be.

....and he's on the acid washed thing again.

Minutes after reveling in a "lock her up" chant, Trump says Democrats would "use the power of the law to punish their opponents"

Monitoring @FoxNews, which appears to be the only network covering President Trump’s rally live, and he has been airing his grievances about Secretary Hillary Clinton’s emails for quite some time. The President says if he had done what Clinton did he would have been executed.

Trump tries to convince his #maga audience that they are not paying for his tariffs on China. (They are.)

Why? Because it's his 60th political rally since he filed for reelection 2.5 years ago, and he's said nothing he hasn't said at the other 59 rallies. Another president would be outlining an agenda for the future, not encouraging "Lock 'er up" chants against his last opponent. https://t.co/QcrsVfRb6c

Trump pulls out all the greatest hits: “They called us deplorables…"

CNN has no idea how to cover this President. They’re torn between capitulation (cover event where journos are mocked), sucking up (“Melania Woman of Mystery”) and ignoring (cut away after 6 mins.). Net/net: a hot mess. https://t.co/cnUw9wfhIk