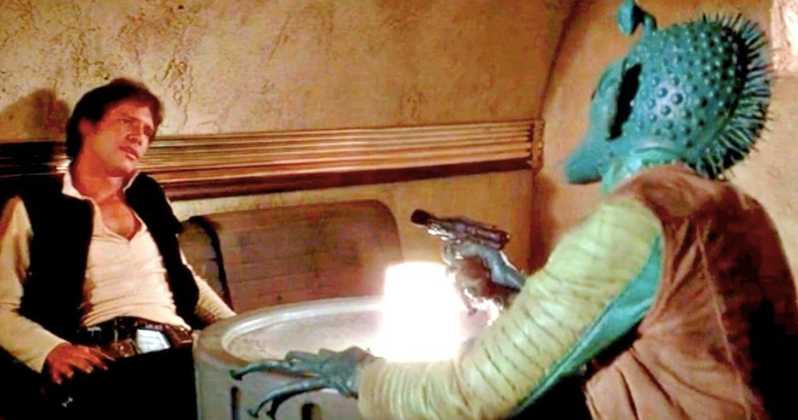 With the launch of the Disney+ streaming service, all eyes were on The Mandalorian, the new sci-fi western set in the aftermath of Return of the Jedi. But the original Star Wars movies are also availabe in 4K, and someone noticed that they've yet again tinkered with the scene where Han Solo shoots Greedo to avoid being abducted by him. Director George Lucas famously edited the scene in the 1990s to depict Greedo shooting first, making Han's killing him an act of self-defense and sanding a rough edge off a classic cinema hero.

The latest cut, which Disney reports was made by Lucas himself, has the two rogues firing simultaneously.

Oh my god. This is not a joke. pic.twitter.com/RMkh7Blg7D

In the newly edited scene, Greedo says something to Han before shooting (Maclunkey!), although no subtitle appears at the bottom of the screen. Han proceeds to shoot once. This is followed by “a new explosion [that] covers a transition from them shooting to Greedo hitting the table, removing the Greedo dummy altogether.”

The account also discovered while scrubbing through the footage that it appears “the timing has been adjusted farther and they now shoot on the same frame.” It’s possible that these changes were made to improve the pacing of the scene since it’s different from what was originally used.

The Han-Greedo scene is the Oak Island Money Pit of movie scenes: it's been excavated and flooded so much that it's become more of an idea than anything else, its truths forever beyond our grasp.