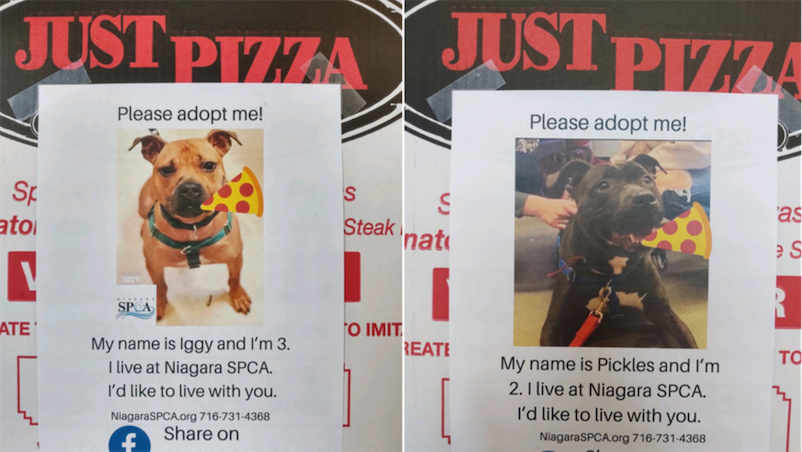 Amherst, New York's Just Pizza & Wing Co. is slapping dog adoption fliers on their pie boxes to help animals at the local SPCA find their forever homes. And if you adopt one of the dogs, you get a $50 gift certificate for the restaurant. From CNN:

The unique idea came after Mary Alloy, who owns the pizza franchise with three of her children, began volunteering with the Niagara Society for the Prevention of Cruelty to Animals (SPCA). Alloy worked with Kimberly LaRussa, an SPCA event coordinator, to come up with ways to help more shelter animals find their forever homes.

"Kimberly texted me one night and was like, 'Hey, what would you think about putting pictures of the dogs on pizza boxes?' and I just couldn't wait," Alloy said. "We are all animal lovers here, so I got permission from the franchise to do it and immediately got to work..."

"We've had a tremendous amount of interest and support from the community and beyond since the story went viral on Friday," LaRussa told CNN. "Many people want to order a pizza just to get the shelter dog photo, other pizzerias have offered to put flyers on their pizza boxes, and so many people are tagging their friends and family."

Previously: Woman spots her dog, lost in Idaho, on a Florida brewery's "adoptable dogs" beer can