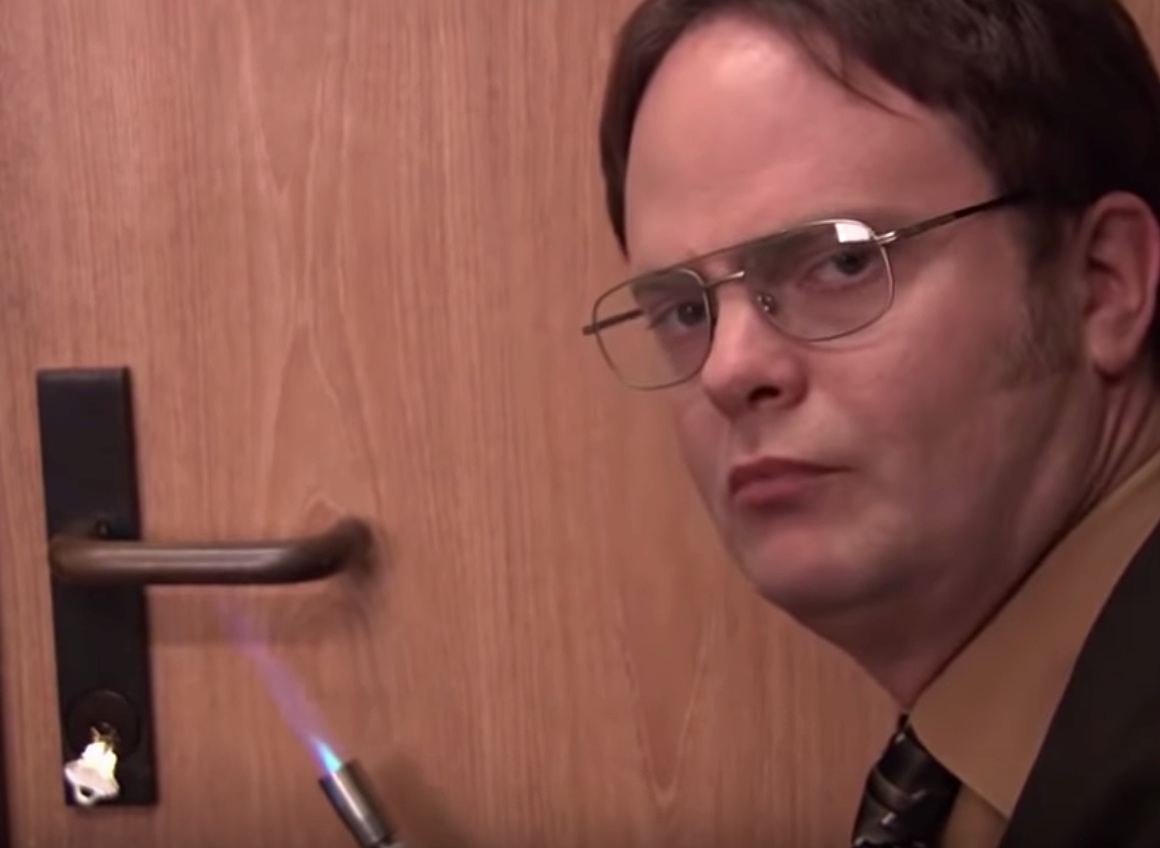 Anthony Farrell, writer: Greg was like, “It’s the Super Bowl episode. We need it to be big and crazy and wild and this is the first thing they’re gonna see, so we want people to stick around.” He said to me and [fellow writer] Ryan Koh and some of the writers’ assistants, “You guys work on this cold open.” We knew it would start with Dwight setting off the fire alarm and Greg was in a place where he was like, “We need it to be bigger and crazier.” So we just started adding all sorts of crazy shit happening with the mayhem and the melee, like them using the photocopier as a battering ram and cats falling out of the ceiling. A lot of it wound up getting shot.

Randy Cordray, producer: All of the characters think they are going to die. Oscar jumps up on his desk and climbs up into the drop ceiling and Angela pulls out a cat from her file cabinet and says, “Save Bandit!” And she throws Bandit up to Oscar, who doesn’t want anything to do with Bandit. And then moments later the cat crumbles through a panel of the drop ceiling and falls back down. This was a big sequence that Greg really wanted in the show. Well, you can’t injure an animal, and so we had to figure this out. We had to build a stuffed animal to match Bandit. It was about $12,000 because seamstresses have to match the coat of the cat, they have to meticulously paint furry fabric and create the exact shape and size of Bandit.

Jeff Blitz, director: In the original script, Oscar was already in the ceiling when Angela threw up the cat. They had thought that it would just be like a stuffed cat. Oscar would extend his leg out from the ceiling to kick the cat back down. I thought that that would seem really mean-spirited. I thought it would just be really funny if the throw is just a little too strong and so the cat went too far and then came down. And then I was convinced that we couldn’t use a stuffed cat because it would look like a stuffed cat being thrown. We ended up using two real cats. There was one trainer who was standing in the ceiling to catch the first cat and another trainer to throw an identical cat back down. Then there was a cat thrower who had an Angela wig and Angela wardrobe on that we had to bring in for that.

The Office: The Untold Story of the Greatest Sitcom of the 2000s: An Oral History (Amazon)