Trump: 'I would love to have the country opened up and just raring to go by Easter' 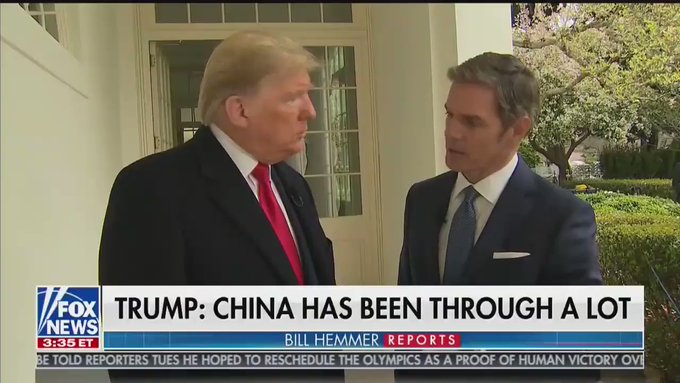 “I would love to have the country opened up and just raring to go by Easter," is a thing that Donald Trump just said during a Fox News virtual town hall.

This is contrary to what officials at the U.S. Centers for Disease Control and the World Health Organization, as well as economists, have advised.

"Easter is a very special day for me ... Easter Sunday, and you'll have packed churches all over our country."

A “very special day for me”?

Packing them into churches?

The man is nuts and he could get a lot of people killed.

Trump on why he picked Easter as the day he wants to end strict social distancing and reopen American businesses: "Easter is a very special day for me ... Easter Sunday, and you'll have packed churches all over our country." pic.twitter.com/6cXEtW8LmR

Trump explains why Easter Sunday is a "beautiful time" for Americans to be working again pic.twitter.com/lwg5cayiKB

Trump, asked why he chose Easter as the date to end the shutdown, says it's because it'd be beautiful to have packed churches all around the nation.

Trump: "And I say, wouldn't it be great to have all of the churches full? You know the churches aren't allowed essentially to have much of a congregation now... So I think Easter Sunday, and you'll have packed churches all over our country. I think it would be a beautiful time."

Trump: "So we're open for church service, and services generally, on Easter Sunday. That would be a beautiful thing."

Hemmer: "Thank you for your time."

Trump: "Thank you very much."

Joe Biden on the idea that President Trump is going to be able to get things back open by Easter: “That would be a real resurrection if that could happen."

Oh my. Trump just told Fox News he wants "packed churches" on Easter. "Wouldn’t it be great to have all the churches full?”

Virologists, however, say it would not be great to have churches packed full in 2 weeks. It would be dangerous. #coronavirushttps://t.co/bnH3Xjn4fT

Don’t listen to Trump. Don’t go to church on Easter and die. Trump is a reckless idiot.

.@jaketapper: "President Trump said today he would like to reopen the country by Easter. What's your response?"@JoeBiden: "He should stop talking and start listening to the medical experts."