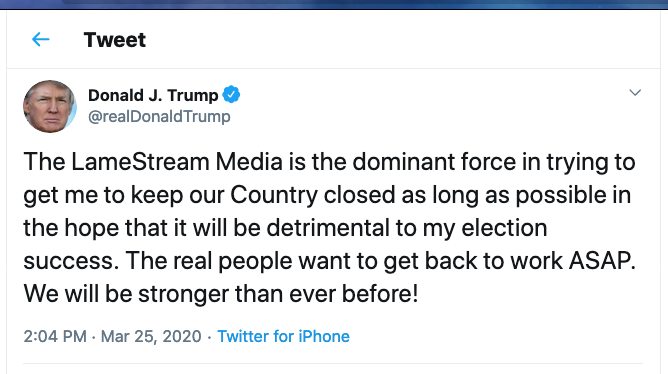 Spoiler: Yes, he is responsible. No, he won't begin to act responsibly any time soon.

Impeached, manifestly unfit, and provably corrupt United States President Donald Trump said some more crazy messed up crap today about the coronavirus pandemic. It's only gonna get worse with this madman.

Here is what Donald John Trump tweeted from his iPhone on the day of the highest death count yet in America from COVID-19 and coronavirus.

The LameStream Media is the dominant force in trying to get me to keep our Country closed as long as possible in the hope that it will be detrimental to my election success. The real people want to get back to work ASAP. We will be stronger than ever before!

Here are some responses from observers of the rolling apocalypse we seem to be in.

It goes without saying that it's sociopathic narcissism and dangerous and his actions from the very beginning have greatly exacerbated the human and economic cost of the crisis.

the president politicizes the lockdown, essentially calling on his supporters to choose (very soon in the future) between him and public health advice: https://t.co/jtza7GmALA

1) media outlets are staffed by real people
2) many of em losing jobs right now https://t.co/HMZhaX6bMx
3) other real people are worried about going back + getting sick https://t.co/7qNp5V0prV
4) health experts say reopening too soon could be a disaster https://t.co/uYwxT8eJGC https://t.co/AUZIhDYUdu

Just as the CCP is not China, Trump is not America — he doesn’t open or close anything and he’s rendered himself almost irrelevant to the response, it’s just bellowing from the sidelines as grown ups get on with the job. https://t.co/41hbNUkzPB

I'll defer to the professionals — @jmeacham, @DorisKGoodwin, @KevinMKruse, et alia, but I'm pretty sure there is an inverse correlation between presidential leadership in times of crisis and solipsistic worriment about re-election. https://t.co/GHVxWBPM7a

The President of the United States asserts that the Covid-19 lockdown is a conspiracy against him personally.

Don't tell The Donald, but the people who'll respond to this--and therefore risk getting Coronavirus while hospitals are still overloaded--are cult members.

Killing his voters to own the libs. pic.twitter.com/OneOknCVpL