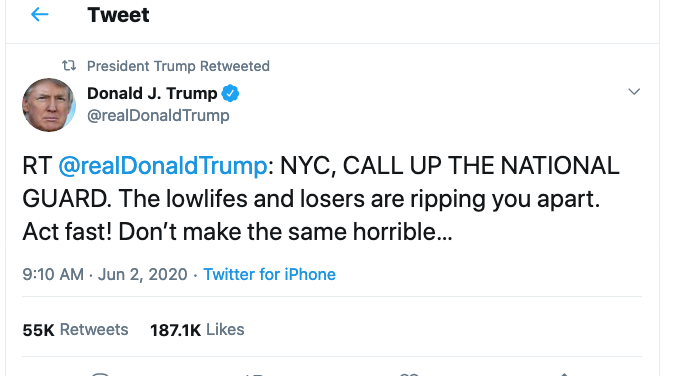 President Donald Trump on Tuesday said that military troops should flood the streets of New York City. Elsewhere around the U.S. today, 5 officers were shot and wounded, as police attack crowds nationwide who have gathered to peacefully protest the killing of George Floyd.

New York Governor Andrew Cuomo voiced outrage at the chaos in America’s largest city, saying its mayor and police force “did not do their job last night.” He said he believed Mayor Bill de Blasio underestimated the scope of the problem.

The governor said he had offered the state’s mayors support from state police or 13,000 National Guard who are on standby and said that with a 38,000-strong police force, New York City should be able to address its unrest on its own.

He added that Trump sought to blur the line between protesters with a legitimate cause and looters. Authorities blame the looting and vandalism on a relatively small number of people protesting against police brutality.

De Blasio poured cold water on the idea of deploying the National Guard in his city.