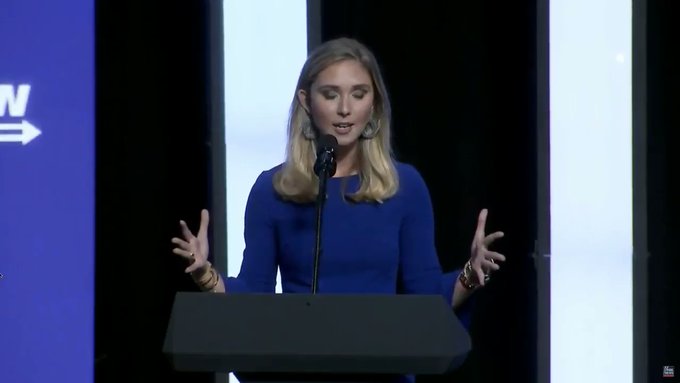 Regan here is a 2019 graduate of Northwestern State in Louisiana.

“Aunt Jemima was canceled… She was the picture of the American dream. She was a freed slave who went on to be the face of the pancake syrup.”

“Aunt Jemima was canceled… She was the picture of the American dream. She was a freed slave who went on to be the face of the pancake syrup." -- A student at Trump’s event on Tuesday pic.twitter.com/jgONhiXiza

You never know what sort of racist gobbledygook is gonna splurt out of the mouth of Donald Trump and his human props.

This whole speech has been quite the shitshow.

Regan here was fired because she posted on FB that her white skin is a gift from God and she didn’t understand why preachers wanted her to apologize for it.

I already KNOW that no one asked her to apologize for being white, but that aside, here’s her take on #AuntJemima. #MAGA👌🏻 pic.twitter.com/tZiStY0NWU

It’s not MY biggest problem by a mile.

NO ONE I know is marching and protesting during a pandemic over #AuntJemima or pancakes.

So basically , this guest speaker just said Aunt Jemima is a symbol of freed slave. Our proud history, and these mobs are trying to cancel that history. Followed by cheers. #trumparizona #unreal

The TPUSA crowd is now chanting USA! USA! USA! because someone said Aunt Jemima is the American Dream.

2019 grad of Northwestern State in Louisiana said she was fired after she made an insta video “amidst all this chaos we are seeing with the black lives matter movement.”
She continued: "Aunt Jemima was also canceled…the leftist mob is trying to erase her legacy."

Wow, now we’re hearing from a young lady who lost her job because of a video about “how disappointed [she was] in the church's reaction to the Black Lives Matter movement.”

A student brought up on stage by Trump in Arizona says "the original first Aunt Jemima was the picture of the American dream."

"She was a freed slave who went on to be the face of the pancake syrup."