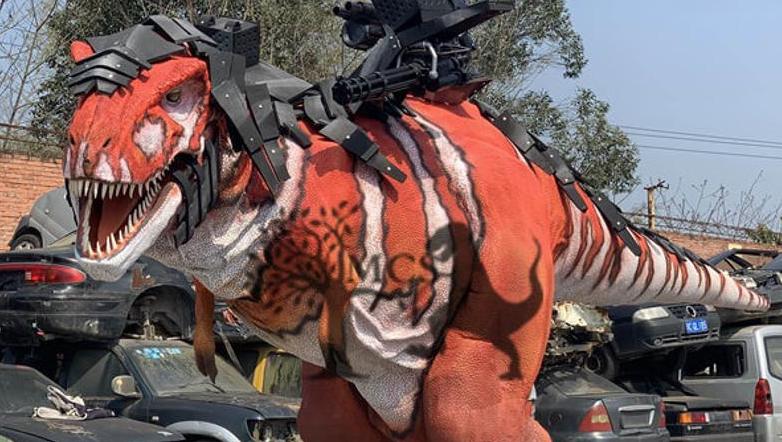 From the listing on Etsy:

Once your gig this 6 meters giant armored bionic skin T-Rex costume your visitors will encounter the more powerful T-Rex than any monster previously. This adult-size Alpha rex suit has a rare and elusive clownfish skin that has light armor on its head, neck, spine. What's more of this Dino costume equipped with mounted Gatling guns with safe water bullets and nerf gun load with soft sponge bullets. this T-Rex suit is armed to the teeth with weaponry. Inside of the Dinosaur suit, you need to wear 40cm tall stilts to walk. you can press and hold the shooting button to make your Gatling guns firing, work the tamed T-rex to attack your prey. like a kids dream come true, Look at this crazy beastly badass Tyranosaurus costume, you can have many attacks, guns, and mini rockets. also, the T-Rex can spray smoke and has red lighting eyes. Tame your own T-Rex warrior start your beast battle.

Keep in mind, however, that this thing also weighs 75 pounds; although your purchase does include a wooden carrying case, in case you don't want to ride the subway in your Bionic Dinosaur Battle Armor for whatever reason. 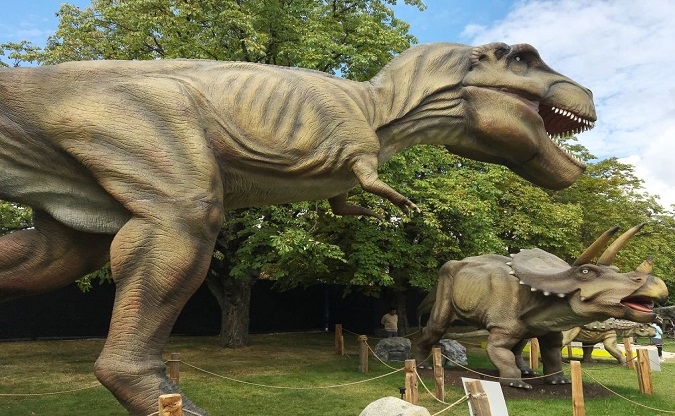 I found this listing on AbleAuction for, "Over 50 life size animatronic dinosaurs inc. T-Rex, Brontosaurus and Raptors; plus hundreds of fossils, animatronic equipment, lighting, speakers and more." So of course, I had to know more.

While the auction house won't say where, exactly, these delightful leviathans came from, the Vancouver Sun reports that, "the Vancouver-based Experiential Media Group (Canada) Corp. went into voluntary bankruptcy on May 5, 2020 and KPMG was appointed trustee." The article continues:

According to a KPMG report, EMG Canada was formed in January 2019 to buy the assets of Dinoking Tech Inc., that had been operating an animatronics business since 2007. In 2015, Dinoking merged with a U.S. company Premier Exhibitions that focused on historical artifact exhibitions and began having financial problems a year later.

The company’s failure come despite it creating touring exhibitions of dinosaurs and bugs that were leased to museums, zoos and tourist attractions for a fix period in over 100 cities around the world.

Apparently Dinoking Tech, Inc. also owned the only collection of artifacts for display from the Titanic wreck as well.

Able Auctions CEO Jeremy Dodd also told the Sun, "There’s just about every type of dinosaur. We also have a whole pile of authentic and original fossils and all the equipment that’s related to putting on a show like this."

Bidding on this army of robotic dinosaurs begins on Wednesday, August 5; AbleAuction advises that you sign up for their service at least one day ahead of time. Read the rest