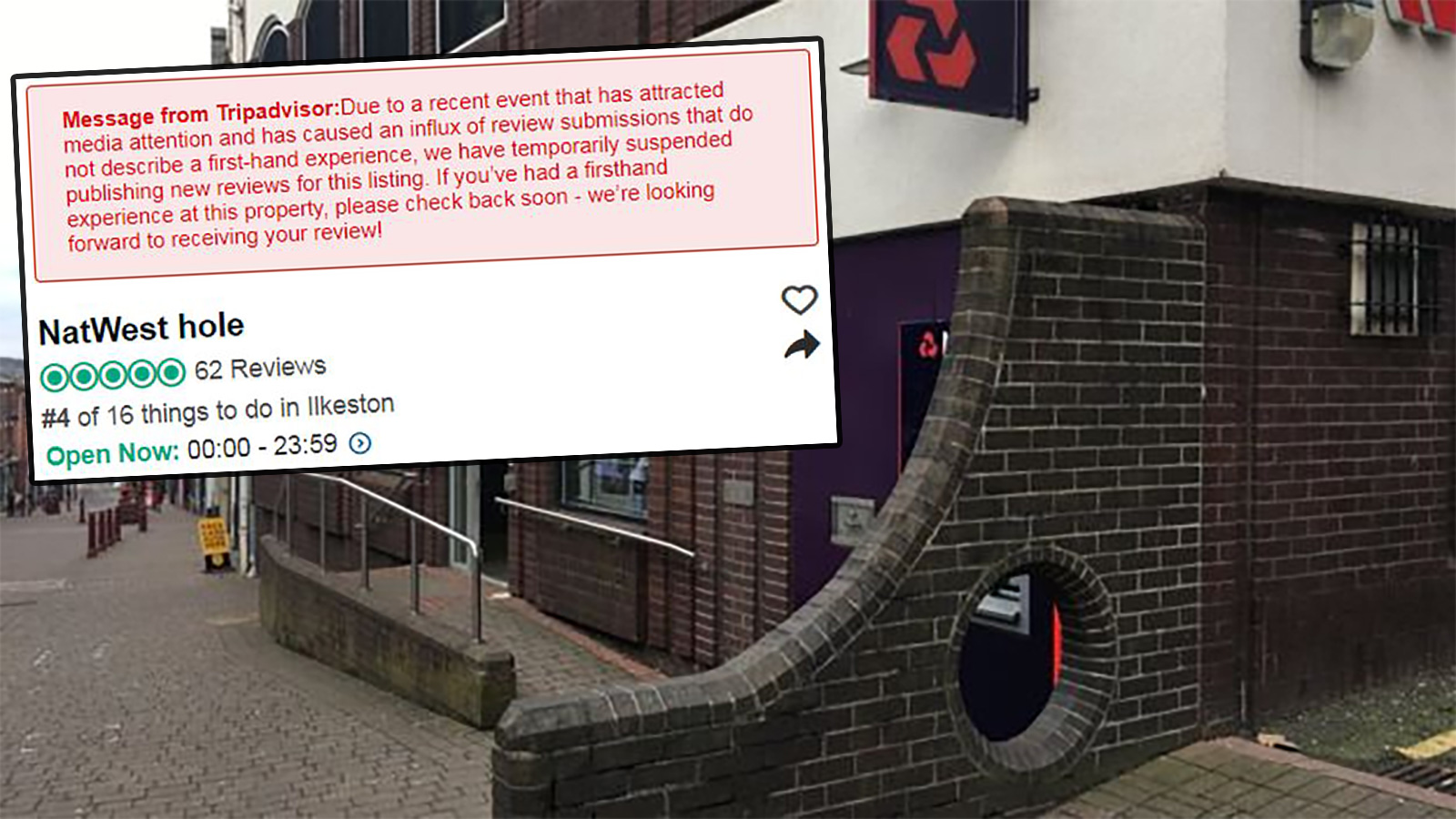 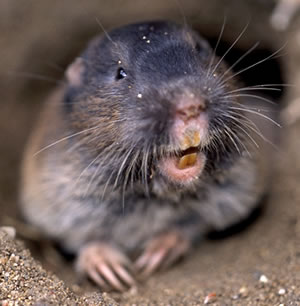 Facebook user Brandon Ftacek shares this fantastic demonstration of just one of the many potential pitfalls you may encounter when using gasoline and rapid combustion to control your local gopher population.

He certainly showed them. 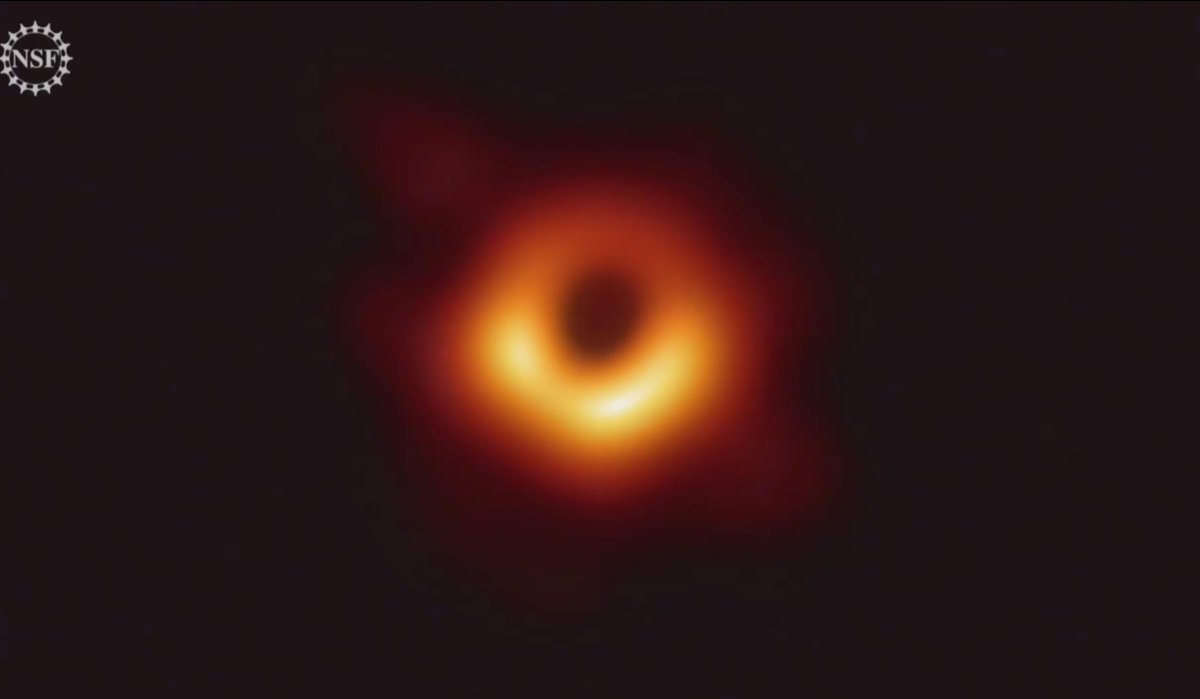 One day, my children, all this will be yours.

From The National Science Foundation:

So how were scientists able to “see” the supermassive black hole at the center of the M87 galaxy 53 million light years away? ...

It is still impossible to image the actual black hole (again, that intense gravity let’s nothing escape) so the data being collected is light from the material around the event horizon of the object — the “point of no return” of a black hole. What we are seeing is truly the silhouette of a black hole.

This is what it is like to stare directly into the void. 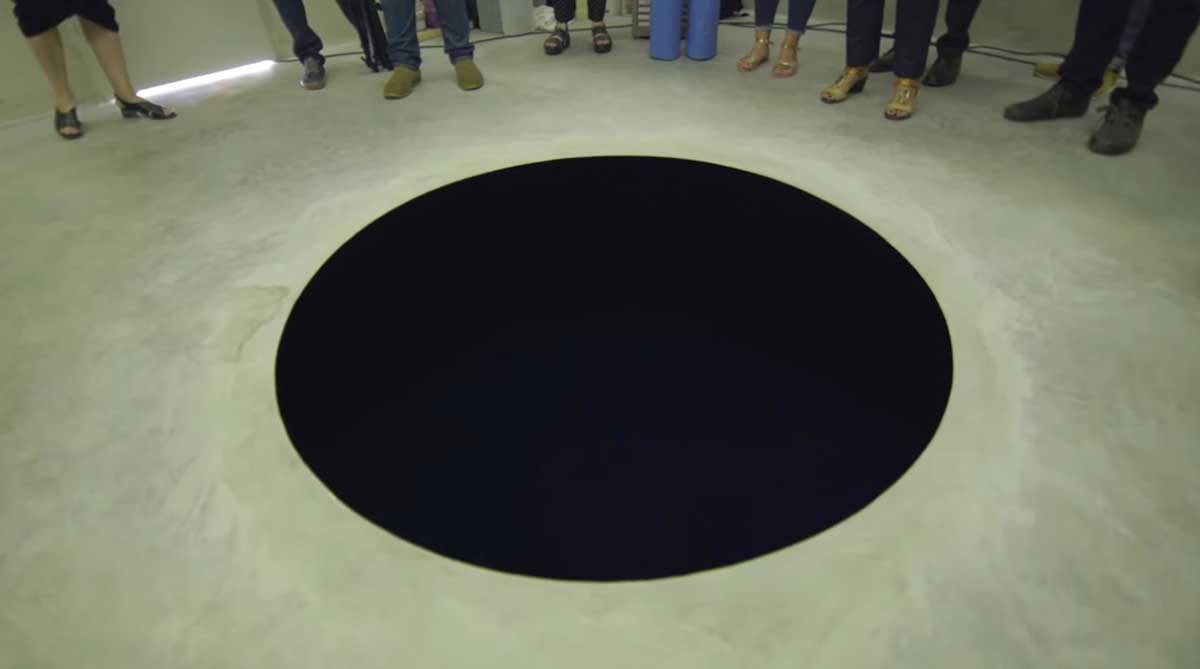 The blackest of black pigments is a substance called Vantablack. It reflects almost no visible light, so anything painted with it looks like a 2D cutout of nothingness.

British artist Anish Kapoor licensed the worldwide exclusive rights to use Vantablack in art, which makes him kind of an asshole, but we've already complained about him on Boing Boing and that's not the point of this post. The point is that Kapoor has n work of art at the Serralves Museum in Porto, Portugal called Descent Into Limbo. It's an eight-foot deep pit and because Kapoor painted the interior of the pit with Vantablack, it looks like a two-dimensional black circle painted on the floor of the museum. You can guess what happened next. A 60 year old visitor (probably the kind of guy who can't pass by a "wet paint" sign without poking his finger at whatever the sign is referring to) ignored the warning signs and stepped into the hole, falling eight feet to the bottom of the pit. He was hospitalized, treated for minor injuries and released.

An ode to the audio jack as an engineering marvel 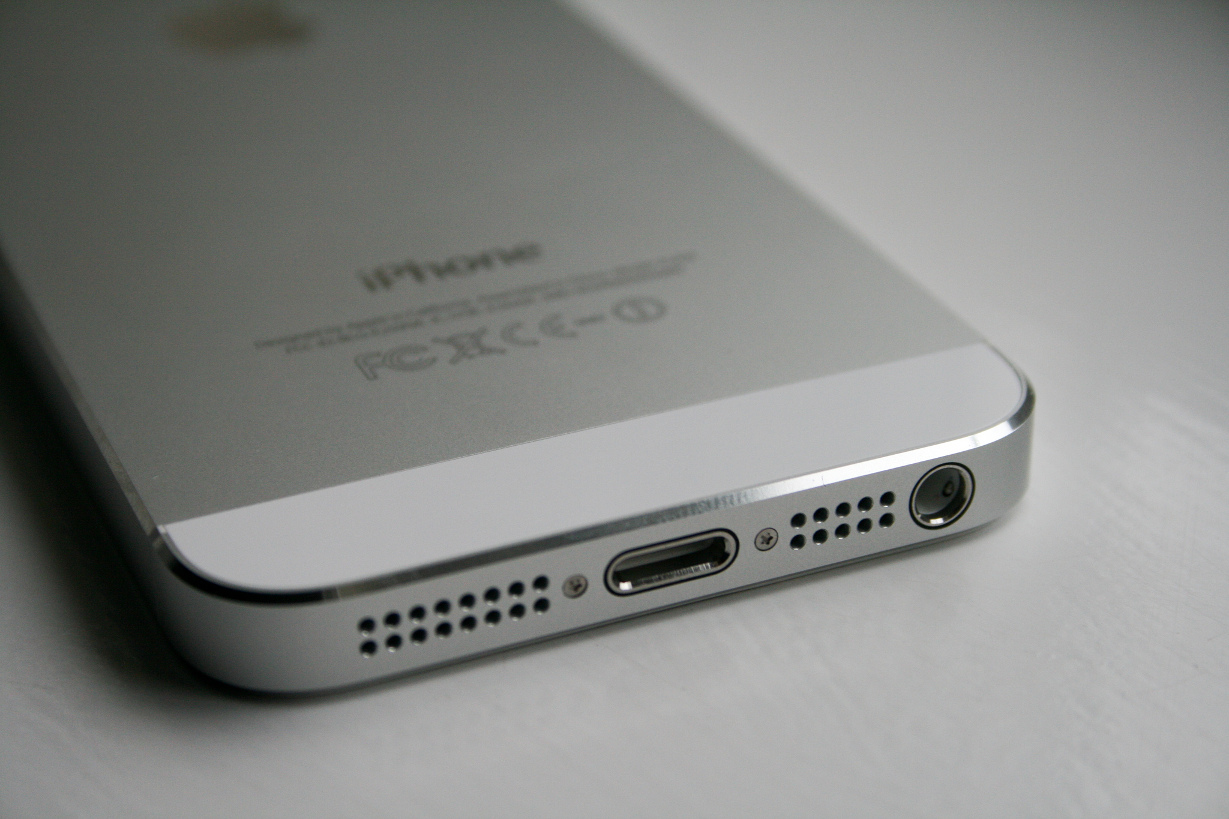 Plenty of folks have bemoaned the disappearance of the audio jack from phones. Among other problems, it'll create "DRM for audio", since any sound that reaches your need-to-charge-them-all-the-time earbuds will now be served up by software-defined bluetooth -- so phone- and app-makers will be able to conduct man-in-the-middle attacks on your music-listening, halting any signals they don't like or don't approve of.

All well-discussed problems! But here, Charlie Hoey writes something deeper -- a lovely ode to the audio jack as a vestige of sheerly analog engineering.

As he notes, the audio jack speaks in the language of voltage. This grounds it in the world of pure physics, and makes it hackable for all sorts of weird and unexpected purposes, like the way Stripe uses it to read the magstripes on bank-cards:

The series of voltages a headphone jack creates is immediately understandable and usable with the most basic tools. If you coil up some copper, and put a magnet in the middle, and then hook each side of the coil up to your phone’s headphone jack, it would make sounds. They would not be pleasant or loud, but they would be tangible and human-scale and understandable. It’s a part of your phone that can read and produce electrical vibrations. [snip]

Entrepreneurs and engineers will lose access to a nearly universal, license-free I/O port. Independent headphone manufacturers will be forced into a dongle-bound second-class citizenry. Companies like Square — which made brilliant use of the headphone/microphone jack to produce credit card readers that are cheap enough to just give away for free — will be hit with extra licensing fees. 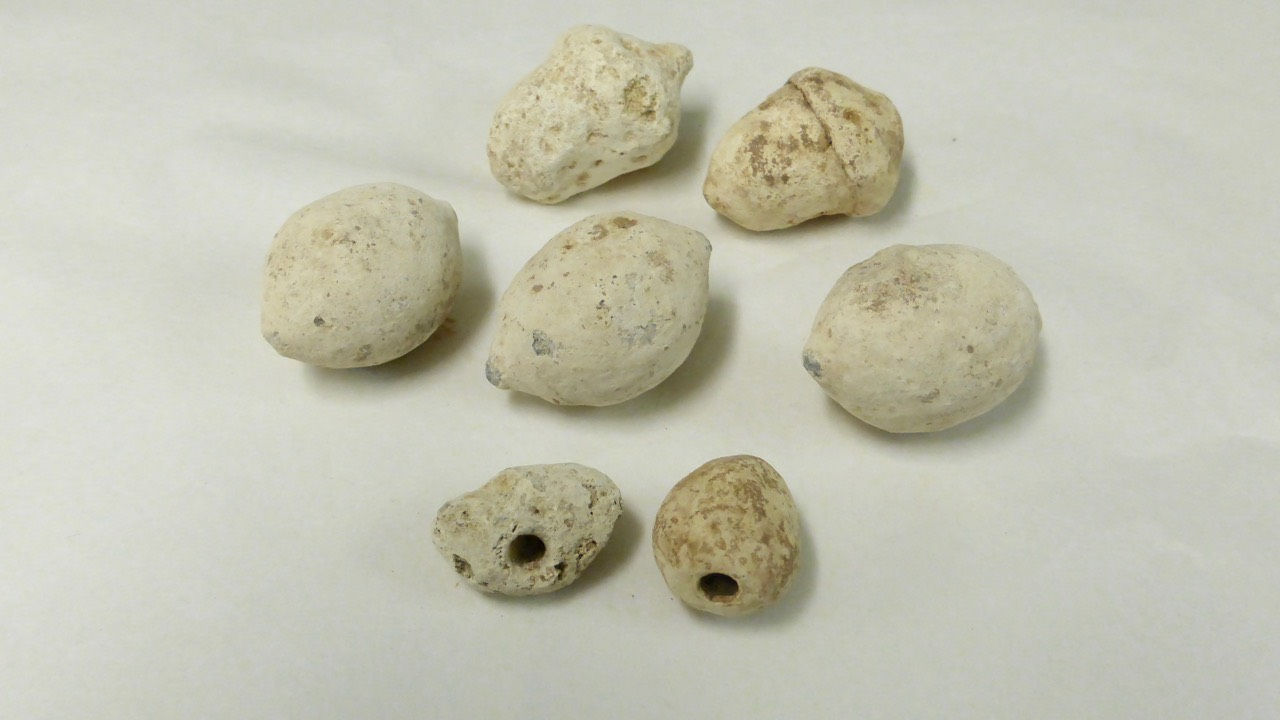 Sling bullets, used by Roman soldiers in an attack on a fort in Scotland some 1800 years ago, appear designed to whistle in flight. A battery of them could be terrifying; or perhaps simply very loud and annoying.

These holes converted the bullets into a "terror weapon," said archaeologist John Reid of the Trimontium Trust, a Scottish historical society directing the first major archaeological investigation in 50 years of the Burnswark Hill site.

"You don't just have these silent but deadly bullets flying over; you've got a sound effect coming off them that would keep the defenders' heads down," Reid told Live Science. "Every army likes an edge over its opponents, so this was an ingenious edge on the permutation of sling bullets."

Archeology.co.uk conducted tests with replicas to see what it would have sounded like:

Two extraordinary facts concerning the small bullets with holes (now dubbed type IIIs) also emerged. First, they could be successfully slung in small groups of three or four to create a form of grapeshot. This had been independently confirmed by T Richardson in his work on Roman sling-bullets at the Royal Armouries. Even more intriguingly, the mysterious holes proved to confer an aerophonic quality: in flight, these lead shot whistled, or more accurately gave off a mechanical buzzing sound eerily reminiscent of an agitated wasp (click below to hear for yourself). Remarkable as it sounds, the simplest explanation for this design modification is that it represents an early form of psychological warfare. To put it another way, the Roman attackers valued the terror that hearing the incoming bullets would instil in the defenders. 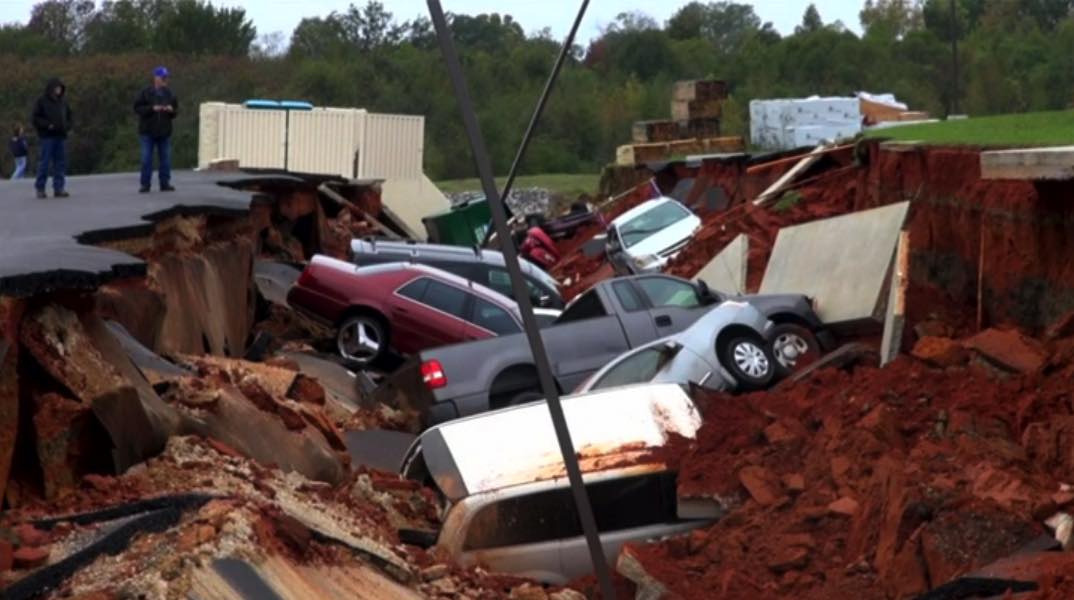 Welcome to the International Hole of Pancakes: a sinkhole that swallowed 15 vehicles at a diner in Meridian, Miss., leaving them submerged in mud and sending otherwise unhurt locals scrambling.

Emergency services were called about 7:15 p.m. central time on Saturday after the ground opened up at the new IHOP on i20 near Bonita Reservoir.

"Upon arrival, we found multiple vehicles in the ditch. At this time, we are trying to stabilize this and keep everyone away,"Meridian Fire Department Chief Battalion Wayne Cook told local reporters at WTOK.

The restaurant only opened a few days ago, and it isn't clear how much damage has been caused to the building or nearby infrastructure. About 40,000 people live in Meridian, which received 3 inches of rain over the weekend and nearly 10 in the last two weeks, according to USA Today. Read the rest

Twitter combines everything in man's inventory to help him escape pit 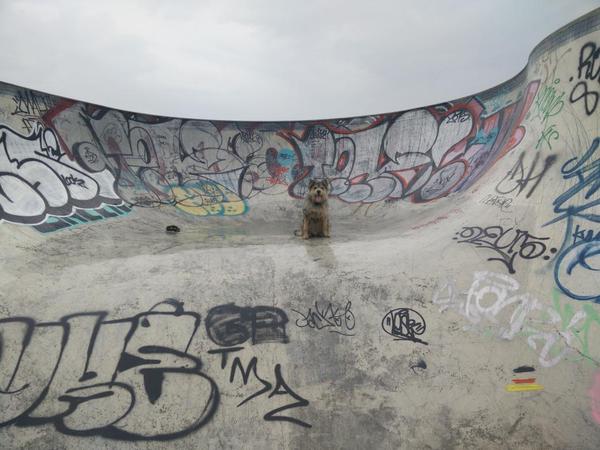 Dinosaur Comics creator Ryan North found himself stuck in a skateboarding pit with his dog, Chompsky, an umbrella, a leash, a t-shirt, and a pocket computer. To escape, he played Twitter like a text adventure. Read the rest

Photo of a monstrous hole swallowing a neighborhood

This giant hole is the result of water flowing into a salt mine in Russia. When the soil started shifting in 2005, the government shut off power to the area to encourage residents to leave.

On Tuesday, the mines were evacuated due to shifting earth, and the hole opened up on Tuesday evening. Russian authorities are studying the scene and performing air quality tests to determine whether noxious gasses are being released.

There Goes the Neighborhood Read the rest