Why are these children "sieg heiling" the American flag? 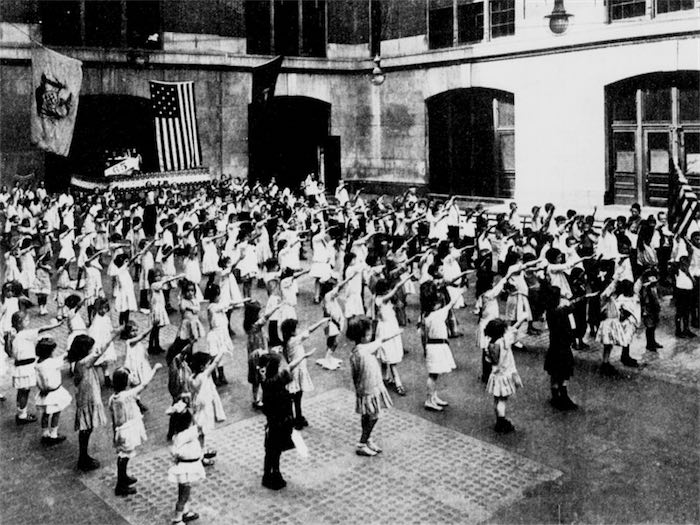 In this 1915 photo, the children appear to be raising their arms in a siege heil salute of the American flag. Actually, this gesture was part of the Pledge of Allegiance ritual for decades. Then, um, Hitler happened. From Smithsonian:

Originally known as the Bellamy Salute, the gesture came to be in the 1890s, when the Pledge of Allegiance was written by Francis J. Bellamy. The Christian socialist minister was recruited to write a patriotic pledge to the American flag as part of magazine mogul Daniel Sharp Ford’s quest to get the flag into public schools.

At the time... Bellamy and his boss both agreed that the Civil War had divided American loyalties and that the flag might be able to bridge those gaps. His campaign centered around the 400th anniversary of Christopher Columbus’ arrival in the new world. He published his new Pledge as part of a unified Columbus Day ceremony program in September 1892 in the pages of the Youth’s Companion, a popular children’s magazine with a circulation of 500,000.

“At a signal from the Principal,” Bellamy wrote, “the pupils, in ordered ranks, hands to the side, face the Flag. Another signal is given; every pupil gives the flag the military salute—right hand lifted, palm downward, to a line with the forehead and close to it. Standing thus, all repeat together, slowly, 'I pledge allegiance to my Flag…'”

Then in the 1930s, Hitler reportedly saw Italian Fascists doing a similar gesture, likely based on an ancient Roman custom, and adopted it for the Nazi party. Read the rest

Help a beautiful Japanese-style RPG get made