This suture practice kit would be a great birthday present 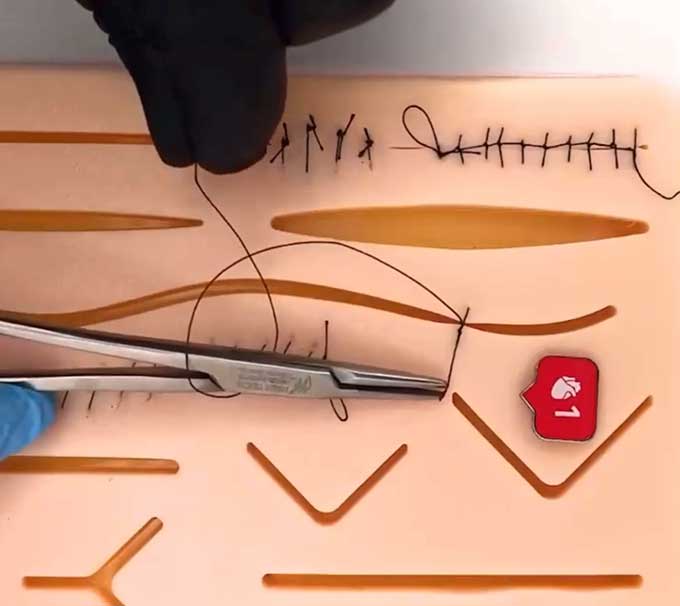 This suture practice kit, which lets you stitch rubber wounds, comes with training videos created by a board-certified surgeon. What a fun gift idea. You can buy them on Amazon.

This suture kit that allows you to practice stitches: from r/Damnthatsinteresting 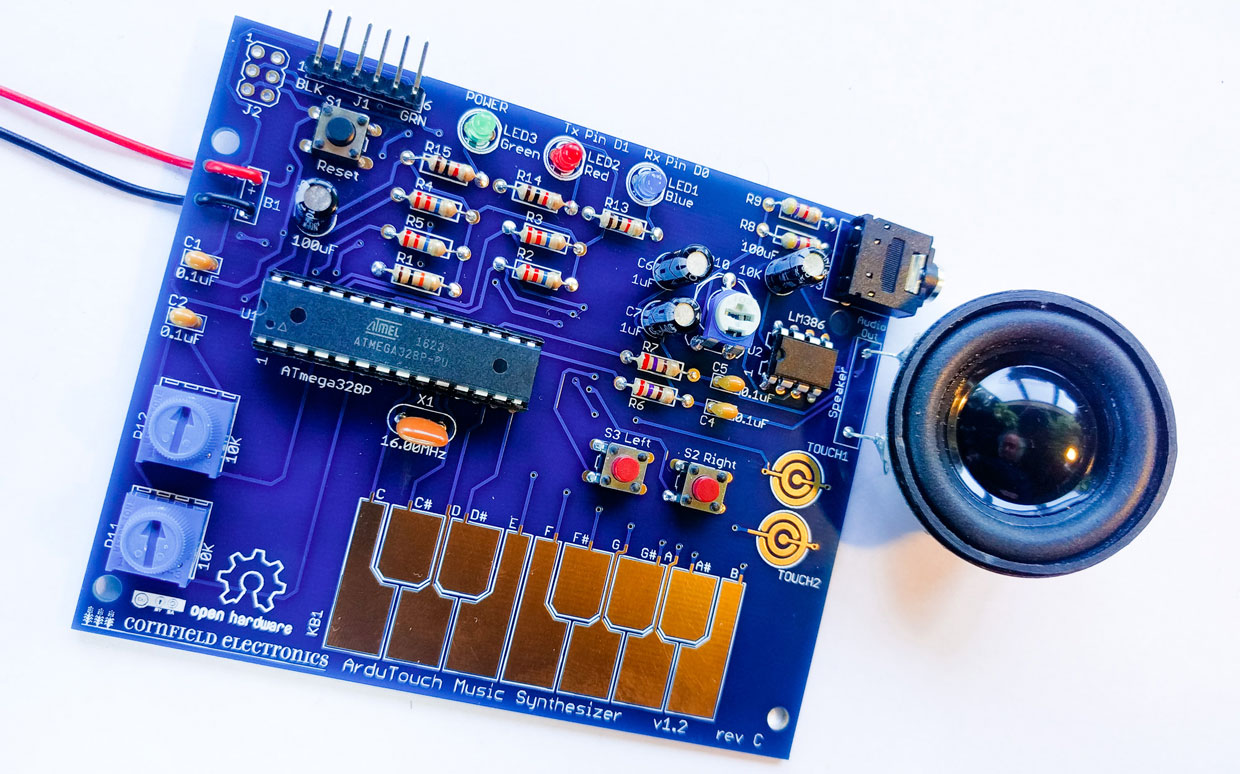 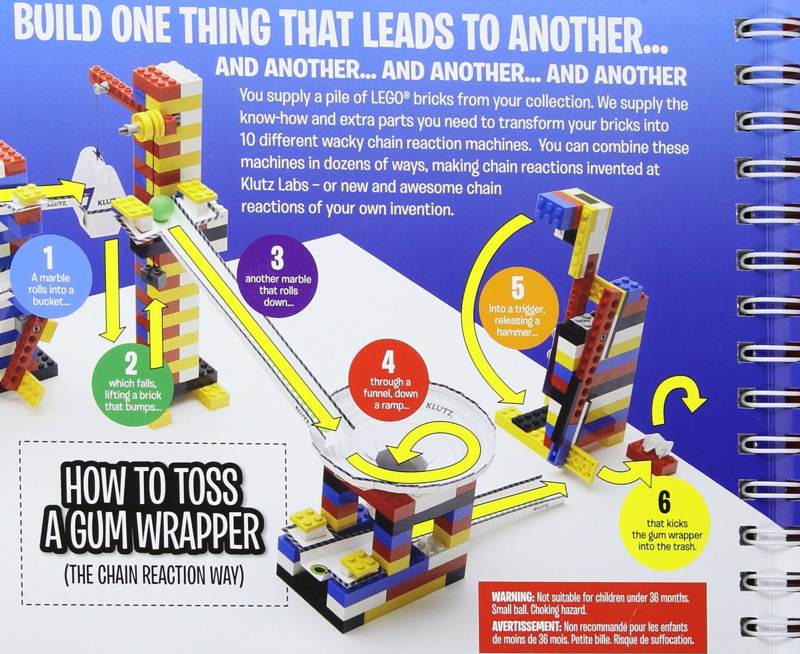 This chain reaction kit is on sale at Amazon for just $10 right now. It has parts and instructions to build a bunch of different Rube Goldbergian machines. 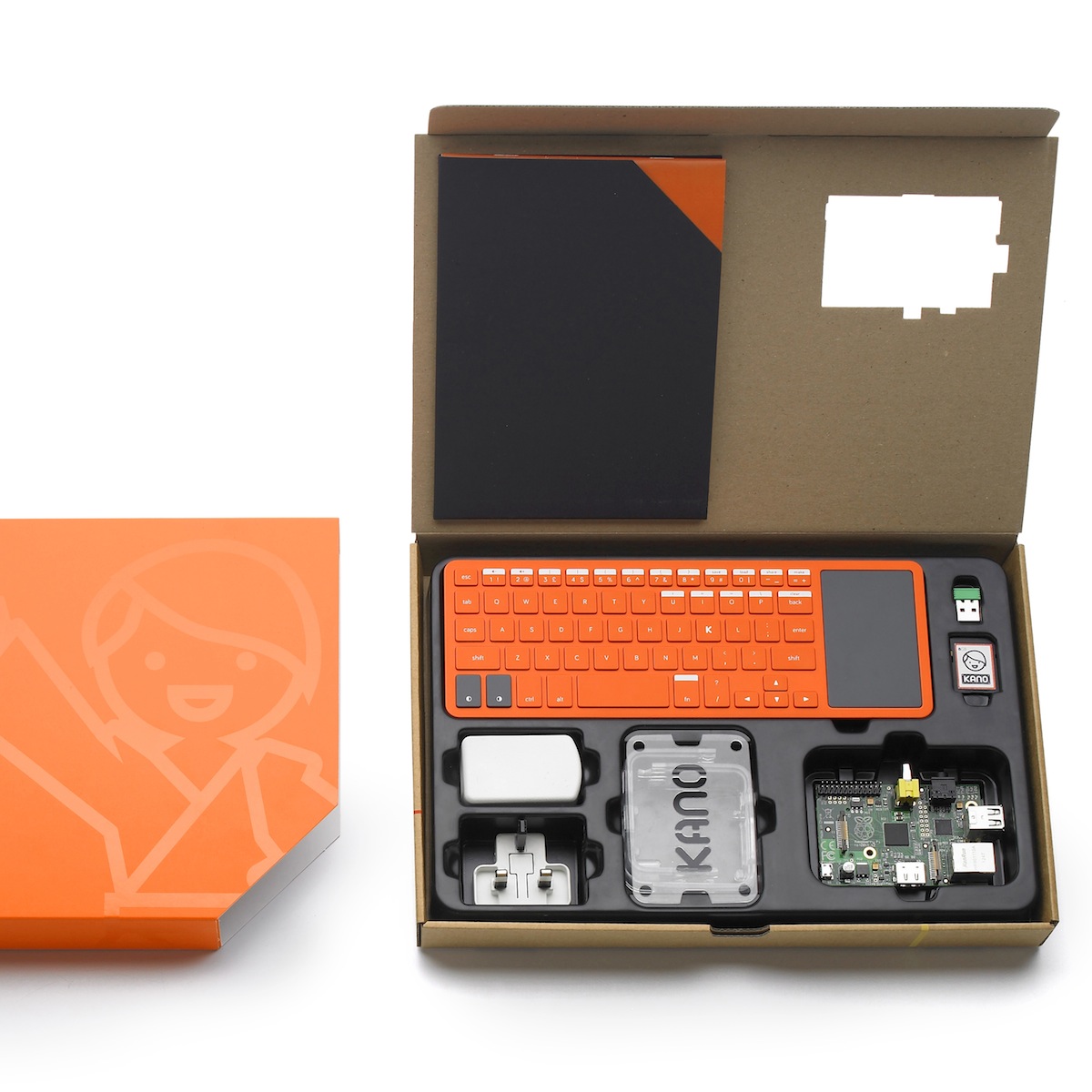 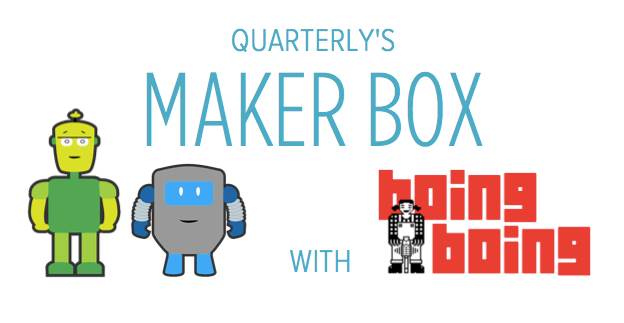 Quarterly.co is launching a brand new Maker Box subscription. This new Maker box features DIY kits and hands-on projects perfect for makers of all ages. You’ll receive kits to build your own gadgets, electronics, quirky tools, and more. Each quarter will feature a new curator, new ideas and new projects. The first curator is Boing Boing! Each box will contain at least 3 kits and will cost $100. The box ships in February. Read the rest

Build a top quality kinetic Rhinoceros Mini-Beest from a kit 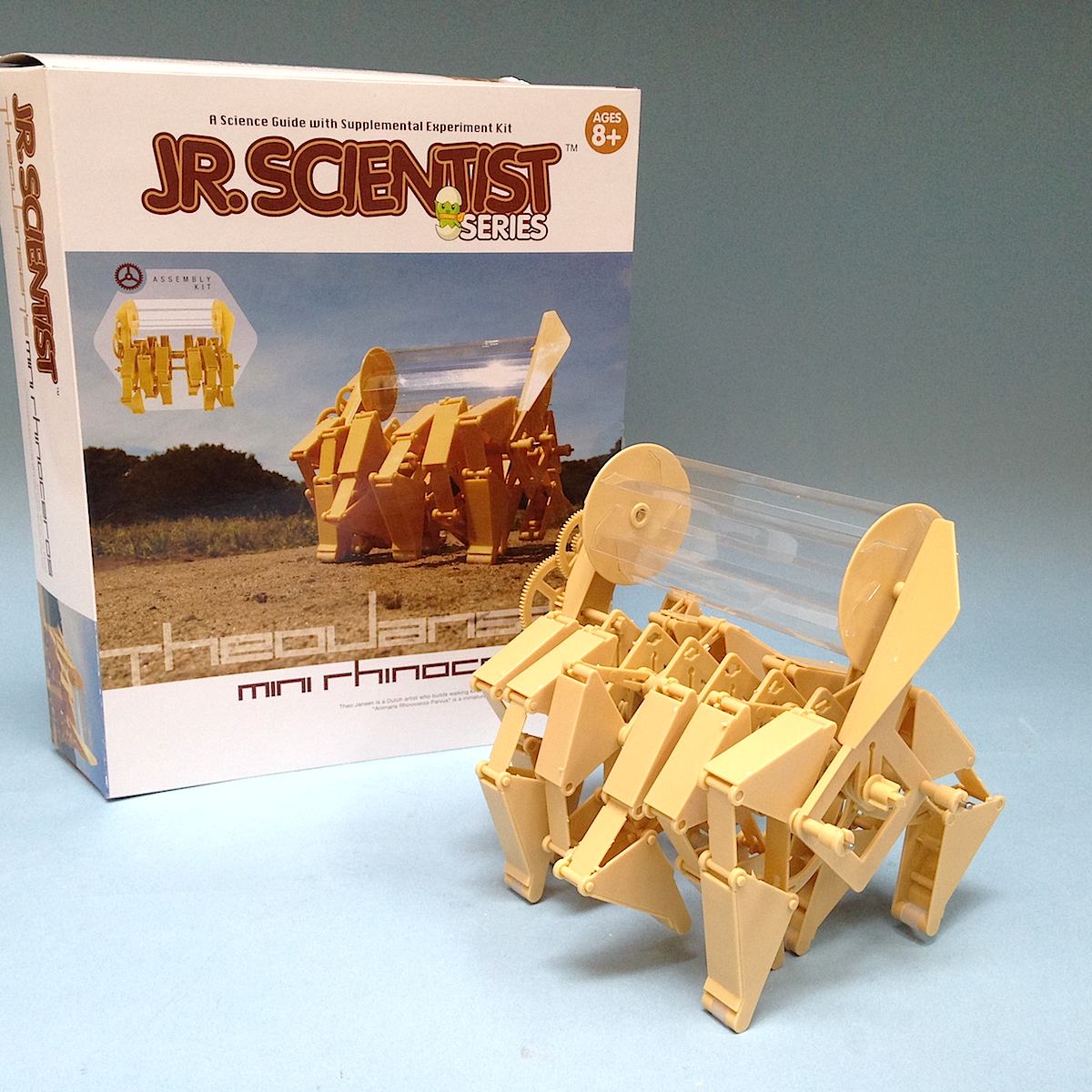 Dutch engineer and artist Theo Jansen has created the most amazing kinematic sculptures, which he refers to as life forms. The incredibly ingenious mechanical linkages are powered by compressed air, harvested from the wind. They are made of PVC pipe, recycled bottles, and scrounged wood from shipping pallets. From a pile of junk, Jansen creates articulated multi-legged beasts which run free on the beaches of Holland. (Okay, amazing is a word that is thrown around a lot, but here is your proof.)

The astounding and huge creature that you see at 5:00 into the video is the inspiration for this excellent book/kit sold by EDU-TOYS. This combination assembly kit and booklet includes the plastic parts engineered by the Japanese educational product producer Gakken and a new 24-page English language booklet. You’ll get fascinating photos of Jansen and his various creations in their natural environment as well as well-written and illustrated instructions. And you’ll need them! The kit has over 130 parts, which at first seems a little intimidating. However, simply follow the clear line drawings for each step of assembly and the sequence and logic to the parts become clear.

The engineering and molding is top quality with polished molds and flash-free parts. No glue or tools are needed. All the press fittings are snug, the snap junctions crisp, and the gears mesh perfectly with seemingly no friction. You’ll appreciate all the attention to detail when you finish the build: place the Mini Rhino on a flat surface and gently blow on the squirrel cage fan. Read the rest

Aurora Monster Scenes: The Most Controversial Toys of a Generation 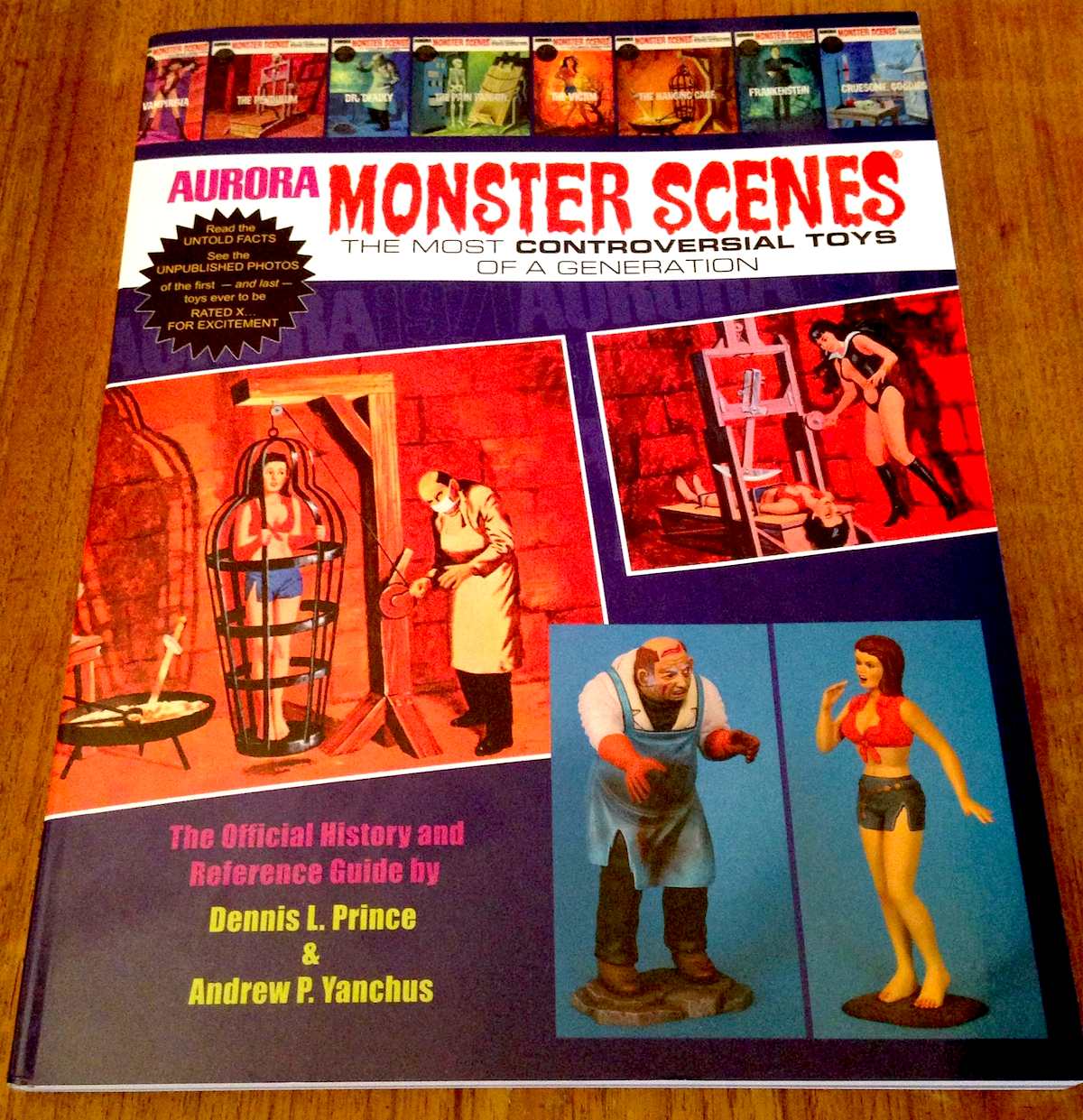 They had me at Aurora. Nothing so perfectly captures the secret origin of my imagination than the Aurora line of snap-tite models from the 1970s, especially the Prehistoric Scenes and monster models, with optional glow in dark parts. It was the lurid Monster Scene sets, however, that pried open my weird third eye (along with Creature Double Feature on my local UHF station and Famous Monsters of Filmland). These delightfully ghastly models included: Dr. Deadly, the igor-esque mad scientist; The Victim, a busty young woman whose only purpose is to be abducted and experimented on; Frankenstein, the misnamed monster to do Dr. Deadly’s bidding; Vampirella, the might-as-well-be-naked vampire whose role in all this is ambiguous; Gruesome Goodies, a laboratory of Tesla-like machinery, workbench, lab equipment and the requisite skull; The Pain Parlor, which includes an operating table, a skeleton, and inscrutable “pain” machine; The Pendulum, for slicing the Victim in half; and The Hanging Cage, a room of torture that even has hot coals and a tiny pincer. Later sets would include Dracula and Dr. Jekyll & Mr. Hyde.

I was too young to recognize anything here that might have been exploitive or inappropriate for a kid’s model set. Looking back, it’s hard to believe they were ever allowed on the shelves of a toy store. It’s no surprise then that the development of the toys was one part “Let’s do the craziest things we can think of...” and one part “but let’s not get parents upset.” To this end, Aurora worked out a smart business arrangement with James Warren of Warren Publishing who was an expert on how to market monsters to young people while staying away from controversy. Read the rest

Get the complete Arduino starter kit & course bundle for 85% off 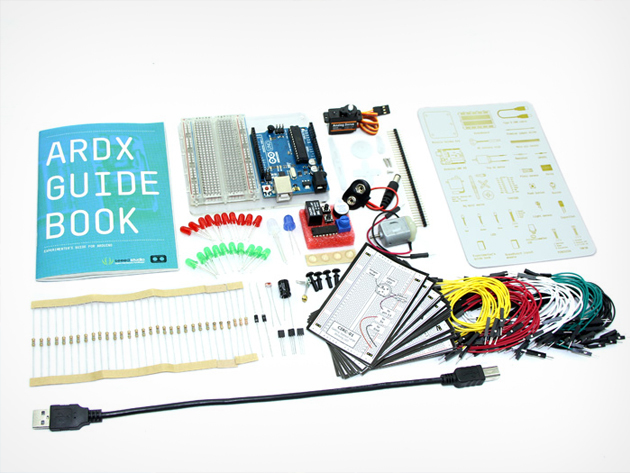 Tackle 13 different projects w/ this fully-stocked beginner's toolkit. The ARDX Arduino Starter Kit pairs a detailed, illustrated guide with all the parts you need to build your own circuits. Perfect for beginners, this kit requires no experience and teaches you to use Arduino to control lights, buzzers, and more. Once you master the basics of Arduino, you can control motors on any device you dream up—from robots, to mood lights, to self-playing instruments, and beyond.

In addition to the kit, this deal offers three video courses. Learn about everything here. ($75.99) Read the rest

The Guardian reviews a selection of fun kids' electronic kits, including littleBits Space Kit, and the Raspberry Pi based Kano computer. Read the rest

How do we enable young makers, without hiding the details of how things really work?

Michael Rosenblatt is founder and CEO of Seamless Toy Company, maker of ATOMS, an electronics construction kit for kids (and adults). He wrote a piece for MAKE about the challenges of making an easy-to-use electronics kit that doesn't hide how electronics works.

Over the last few months, I’ve had the opportunity to work with a great team to design a new electronics construction set called ATOMS. The design goal for ATOMS was to create a plug-and-play construction set that required no experience in electronics or programming. We designed ATOMS to be simple enough for a 5-year-old, and powerful enough for a professional — which means that making table-top creations isn’t enough. You have to be able to build “real” things with it — like a cake with motorized elements, or a nightlight that you can switch remotely with a the shake of a “magic” wand. We designed ATOMS to enable more people to make great things, and particularly with kids, we hope ATOMS will seed a curiosity for how things work.

However, there is an inherent contradiction in these goals — tools that help users extend their capabilities almost always abstract away the true nature of how things work. ATOMS is no exception, and that leads to a number of design decisions we struggle with on a regular basis. We want ATOMS to both empower users, but also be transparent, and oftentimes those objectives are at odds.

How do we enable young makers, without hiding the details of how things really work? Read the rest

On our recent summer family holiday, I stopped in at The California Academy of Sciences, a beautiful science museum and research facility in San Francisco. In the gift shop, I grabbed a MetalWorks laser-cut trolley-car kit. MetalWorks are 11cm square sheets of tin, laser-cut and laser-etched to come apart into pieces ready to assemble into models of famous buildings, iconic vehicles, and other landmarks. I cleverly threw away the packaging (including the instructions) when we packed for home, but as I just discovered when I sat down to assemble the model, the company is smart enough to post PDFs of their instruction sheets. The model was just the right amount of challenging for me -- the kind of thing I could do in 20 minutes with a pair of tweezers while carrying on a pleasant conversation, and the finished product is a pretty cool-looking model indeed.

There are more than 30 different models on the company's website, of which a mere three can be had on Amazon. Correction: Here are 25 more -- thanks to Jeff in the comments!