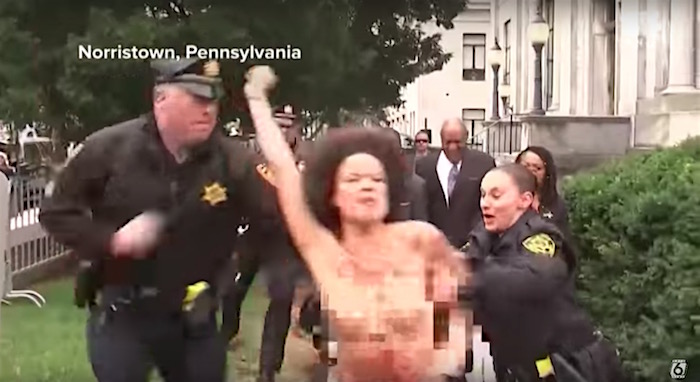 A topless woman with "women's lives matter" written across her chest jumped over a barrier and ran towards Bill Cosby, who was on his way to the Montgomery County courthouse this morning. The protester, who was with around six other protesters, was handcuffed and taken away by police.

Cosby, who has been accused by over 50 women for sexual assault (and has denied everything), is in court today for a retrial, charged with "three counts of aggravated indecent assault," according to the Huffington Post.

He’s accused of drugging and sexually assaulting Andrea Constand, a former women’s basketball coach at Temple University, in 2004. In June, a jury failed to reach a unanimous decision on the charges and the judge declared a mistrial.

Crazy scene as naked protester is taken down by police as #Cosby arrives at court in Norristown. pic.twitter.com/mduaASyjG3

UPDATE: The protestor has been identified as 39-year-old Nicolle Rochelle, an actress who appeared on several episodes of The Cosby Show as a child actress. About her protest today, she says "The main goal was to make Cosby uncomfortable because that is exactly what he has been doing for decades to women and to show him that the body can be aggressive and empowered."

Rochelle, an actress, said she didn’t have any bad experiences with Cosby when she was on the show, nor did she intend to physically hurt him. She is a member of the European feminist group Femen, which is known for staging topless protests around the world.