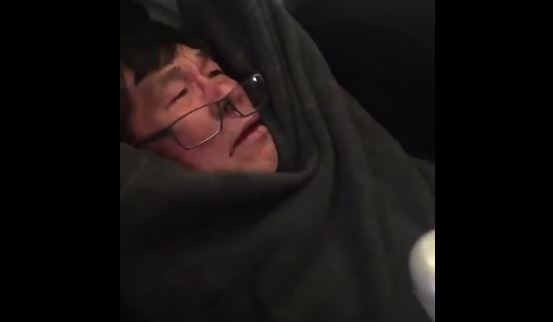 United Airlines offered passengers $800 to skip an overbooked flight: there were enough seats for the paying ticketholders, but not for several United employees who wanted to travel with the plane. With no takers, they started picking people at random to eject.

One, reportedly a doctor, didn't want to go. So they summoned guards to the plane, knocked him unconscious, then dragged his comatose body off the flight in front of screaming passengers. According to the Courier-Journal, the security guard "threw the passenger against the armrest." Passengers had to disboard so they could clean up they mess they made.

"Everyone was shocked and appalled," Bridges said. "There were several children on the flight as well that were very upset."

The videos taken by passengers are startling.

@united @CNN @FoxNews @WHAS11 Man forcibly removed from plane somehow gets back on still bloody from being removed pic.twitter.com/njS3nC0pDl

@United overbook #flight3411 and decided to force random passengers off the plane. Here's how they did it: pic.twitter.com/QfefM8X2cW

Here's the airline's response, given by an anonymous spokesperson:

"Flight 3411 from Chicago to Louisville was overbooked," the spokesperson said. "After our team looked for volunteers, one customer refused to leave the aircraft voluntarily and law enforcement was asked to come to the gate.

"We apologize for the overbook situation. Further details on the removed customer should be directed to authorities."

Update: United Airlines' CEO has apologized: to the other passengers!