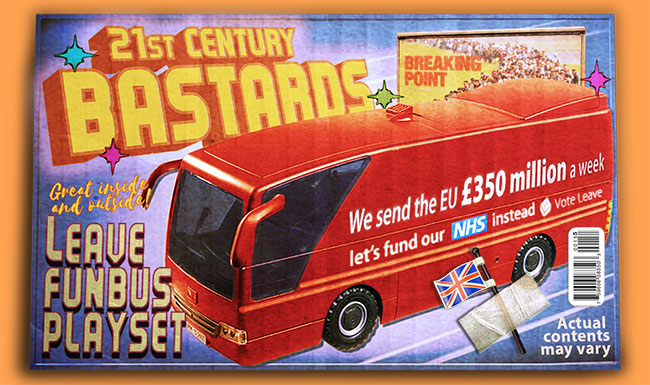 One of the most enduring symbols of 2016's UK Brexit referendum was the huge red "battle bus" with its message, "We send the EU £350 million a week, let's fund our NHS instead. Vote Leave."

The bus served as a useful backdrop to such Tory beasts as Michael Gove and Boris Johnson. Independent fact-checkers declared the £350 million figure to be a lie. Within hours of the Brexit vote, the Leave campaign scrubbed its website of all its promises, and Nigel Farage admitted that the £350 million was an imaginary figure and that the NHS would not see an extra penny after Brexit (indeed, the NHS relies heavily on European doctors and nurses who would no longer be welcomed, and the billions the UK would spend on Brexit wouldn't be available for health care).

The bus was the brainchild of Dominic Cummings, Vote Leave campaign director, and shadowy sinister figure.

This week on Twitter, Cummings got into a debate with David Allen Green, in which he confessed that the referendum was a "dumb idea" and the UK's negotiations with the EU were a "guaranteed debacle."

Tim Farron, the Liberal Democrat leader, seized on the comments, saying: “Dominic Cummings has let the cat out of the bag. This is the man who slapped the £350m NHS lie on the side of the bus who is now saying leaving the EU could be a mistake.

“These Brexiteers have sold us a pup and lied to the public. This is why I believe the public should be given a say on the final Brexit deal.”

Mr Cummings is little known to the public, but is widely seen as hugely influential behind the scenes in pulling off last year’s shock referendum Leave vote. A former special adviser to Michael Gove, he coined the phrase “vote leave, take control”, which excited wavering voters into believing Britain could reclaim sovereignty.