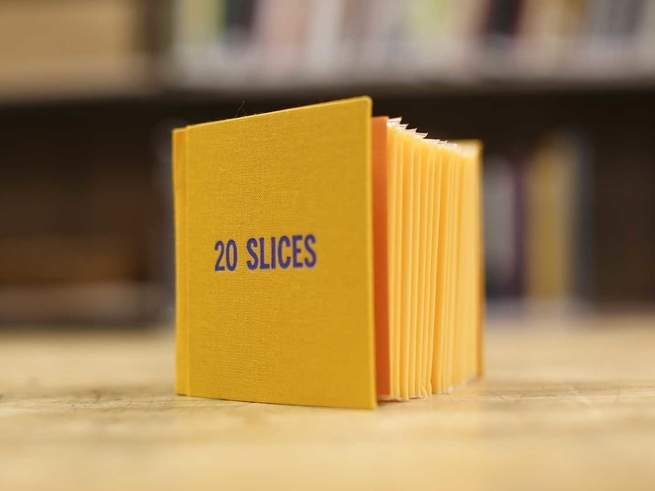 The University of Michigan's library recently acquired a copy of American Cheese, 20 Slices, by Ben Denzer, a book made from shelf-stable, plastic-wrapped slices of American cheese.

The book had an edition-size of ten; the library's copy is number nine. It's the only copy in a library collection. The book is about cheese, but it has no words: the material in its construction is also its subject matter.


Denzer's other books include "200 one-dollar bills arranged in serial number order, and a tiny volume of Chinese restaurant fortunes."


The book was acquired by Jamie Lausch Vander Broek, the Art & Design Librarian at UMich, who spent $200 on the title, and who will keep it in "a special plastic container" and sent it out for examination by classes.

Some people—especially librarians, particularly book catalogers at other institutions—were mad when I bought the cheese book. This surprised me. I thought that people would laugh, or crinkle up their faces in bewilderment. Their anger reminded me of reactions to color field paintings; people seemed divided between "I could do that," and "that's an insult to books!"

All of this gave me a deep sense of satisfaction. If my job is to engender interest and even passion for the library and its collections, a book made of cheese was really getting people excited. Suddenly they had opinions! Even among my coworkers there were arguments about things we take for granted in other books. Is someone the author of the cheese book? What is its subject? Is it about cheese if it is cheese?