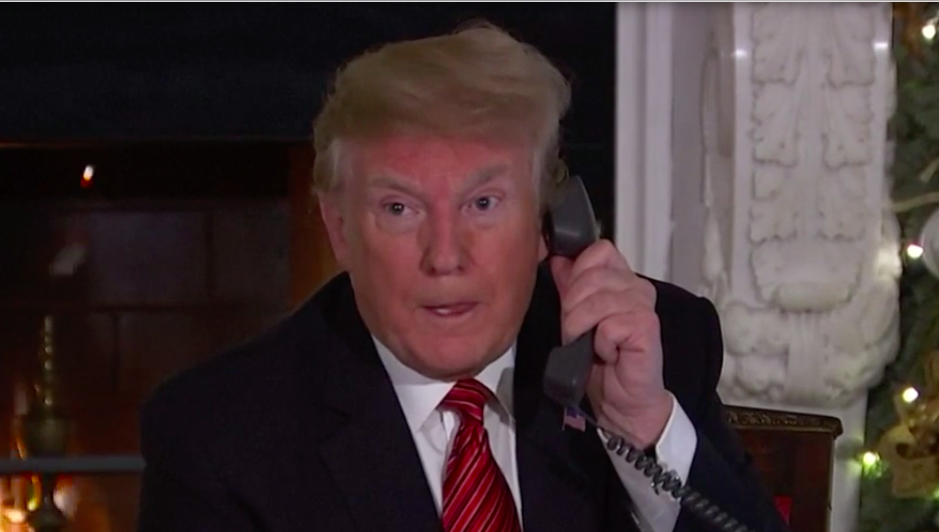 Donald Trump, answering a phone call about Santa Claus from a child, 7, on Christmas Eve:

"Are you still a believer in Santa? Because at seven it's marginal, right?"

Trump sat in front of a roaring fireplace with his wife Melania.

Donald Trump, answering phone call from 7-year-old on Christmas Eve: "Are you still a believer in Santa? Because at seven it's marginal, right?" pic.twitter.com/VHexvFSbQ1

America, you are welcome.

Every Christmas Eve, the North American Aerospace Defense Command in Colorado Springs, Colorado, claims to track Santa Claus’ flight across the globe, a tradition dating to 1955, when a department store printed the phone number of a NORAD colonel in a Christmas newspaper ad by mistake.

This year, though, the NORAD calls came at a precarious time for the president, who is mired in crises, from a government shutdown that has affected a quarter of federal agencies and departments to a stock market selloff amid Trump’s public criticisms of the Federal Reserve.

The NORAD calls were the first time Trump has been seen in public since the shutdown began. NORAD said on Friday it would continue the tradition in the event of a shutdown, adding in a tweet that military personnel would be supported by 1,500 volunteers.

Lawyers for Donald Trump on Monday filed a new challenge to the Manhattan District Attorney’s subpoena for the president’s tax returns, weeks after the U.S. Supreme Court said the president was not immune from state criminal probes.