Lou Dobbs: Trump should 'declare a national emergency and simply sweep aside the recalcitrant left' 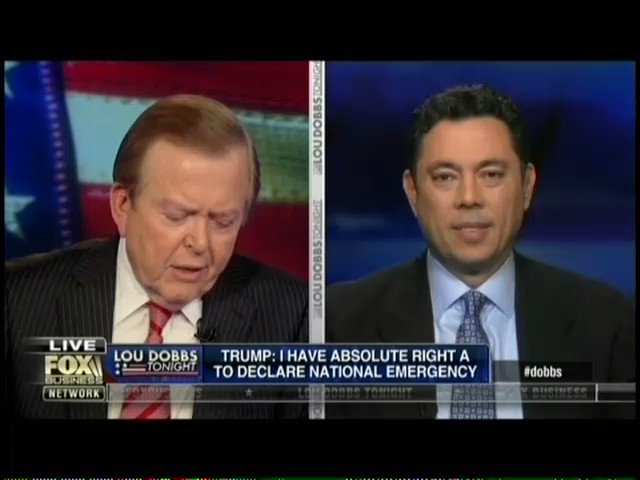 Lou Dobbs said on tonight's broadcast that President Donald Trump has to "declare a national emergency, and simply sweep aside the recalcitrant left in this country," because "They have obstructed, resisted and subverted for far too long."

LOU DOBBS (HOST): In all seriousness here, you said that you would prefer -- you implied, at least, you would prefer he not declare a national emergency. I think it's the only way forward here. He is -- otherwise, there's not going to be a solution.

But I really believe that the way forward here is for him to declare a national emergency, and simply sweep aside the recalcitrant left in this country. They have -- They have obstructed, resisted and subverted for far too long.

Is that your FINAL solution, Lou Dobbs?

Dobbs: Trump should "declare a national emergency, and simply sweep aside the recalcitrant left in this country" pic.twitter.com/7b548v2V8Q

Trump says "the real collusion" is "the fake news" and Democrats both calling the situation at the border "a manufactured crisis" pic.twitter.com/afYLtqOgV7

1. Lies about "new" Dems saying "we can't win this battle with Trump"
2. Threatens to declare nat'l emergency if he can't strike deal w/Congress
3. Says: "You know what works? A wheel & a wall"
3. Offers disturbingly graphic description of a kidnapping pic.twitter.com/Qq1oWnPAro

Trump reassures Hannity that he watched his show last night and says he saw Hannity's montage of all the people referring to this a manufactured crisis. pic.twitter.com/7UAw5KlStO