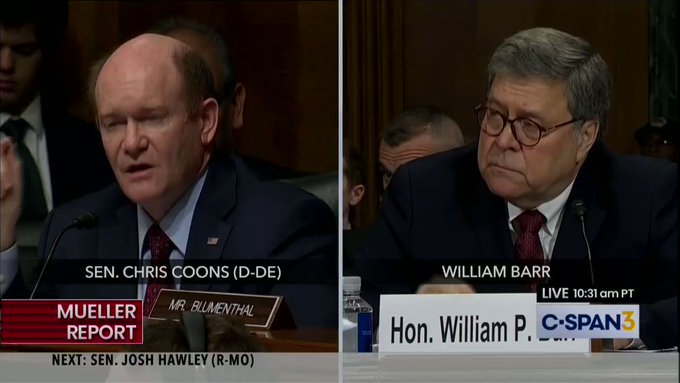 Wow, this sure was a moment for the ages in today's Capitol Hill grilling of Trump's coverup man, aka our Attorney General, Bill Barr. What a massive disgrace this guy is, and what damage he is doing to the nation. Watch this video and see how he splits hairs over whether presidential campaigns should maybe contact the FBI when offered hostile dirt on an opponent from a foreign government.

Another doozy of an excerpt from Aaron Rupar's thread.

OMG -- Barr hesitates before acknowledging that presidential campaigns that are offered dirt from hostile foreign governments should probably contact the FBI pic.twitter.com/eqFkHjmBJj

So much to be shocked by.

The entire hearing was bizarre.

I just have to say this hearing with the attorney general is totally surreal.

Justifying the means of committing the crimes is usually the last thing the criminal does before the caper is up.

I'm still replaying Barr saying he doesn't recall if he has discussed criminal investigations with the White House and President Trump.

Barr said I had no "substantive" conversations and I can't recall.

53) Mazie Hirono exposed William Barr so badly, Lindsey Graham had to jump in and make a fool of himself just to distract from it.

The only good part of this will be one day watching Nathan Lane win the Oscar for it pic.twitter.com/8Y9B86kEB0