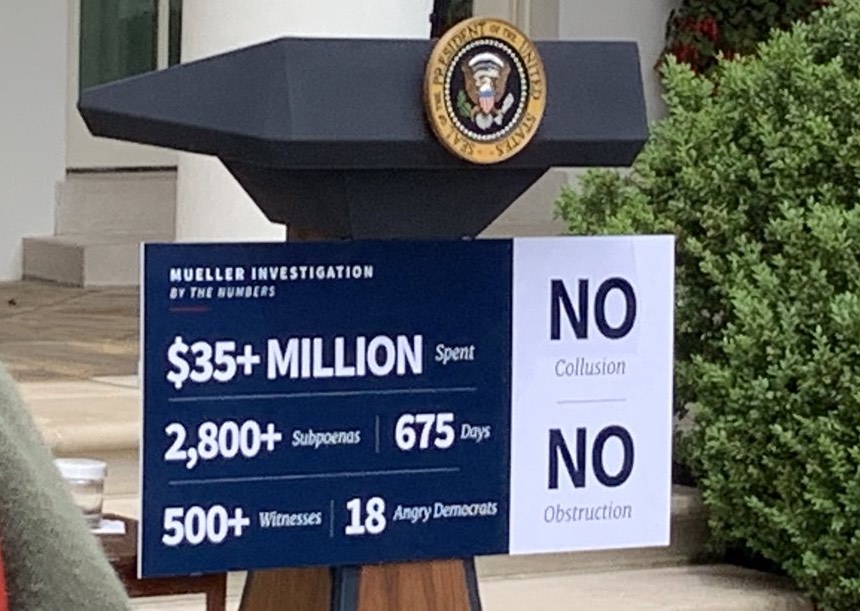 “No Collusion No Obstruction.” Got it.

Graphic design is their passion. This totally accurate infographic looks so powerful and compelling, it could only have been Photoshopped by a Trump intern in WordPerfect 1.0.

Here’s the POTUS lectern in the Rose Garden from the speech in which Trump denied Democrat leader Nancy Pelosi's claims that he is “engaged in a cover-up.”

Honestly it's really hard to argue with these compelling true facts.

Today in the Rose Garden, Donald Trump also said that these 'phony investigations' must end for an infrastructure deal. He repeatedly used 'the i-word' as a substitute for impeachment, the way I once used 'the c-word' for 'cancer,' the week i was diagnosed and utterly terrified by it.

Hope he's just as terrified at the inevitability of losing power.

Twitter churn, below. What a weird world America is right now, folks.

In the Rose Garden, awaiting Trump, “Mueller investigation by the numbers.” Some of the Democrats who were supposed to meet with Trump on infrastructure were already at the White House. pic.twitter.com/Wz3kKeNvso

Here’s the @POTUS lectern in the Rose Garden. pic.twitter.com/VLzzkjlAxW

Again @POTUS refers to the “I-word” for #impeachment.

Trump now talking about "The I-Word."

For some reason, I don't think he means "Infrastructure."

Senate Democrats say @POTUS walked out of the #infrastructure meeting.

Here’s a handout we were just given by @WhiteHouse staff. pic.twitter.com/l5fVXCKksf

Pelosi: "He just took a pass and it just makes me wonder why he did that. In any event I pray for the president and I pray for the United States of America."

Schumer: "What happened in the White House would make your jaw drop."

Walkout of #infrastructure meeting "was planned" with signs printed up in advance, says @SenSchumer.

[image via Steve Herman of Voice of America]