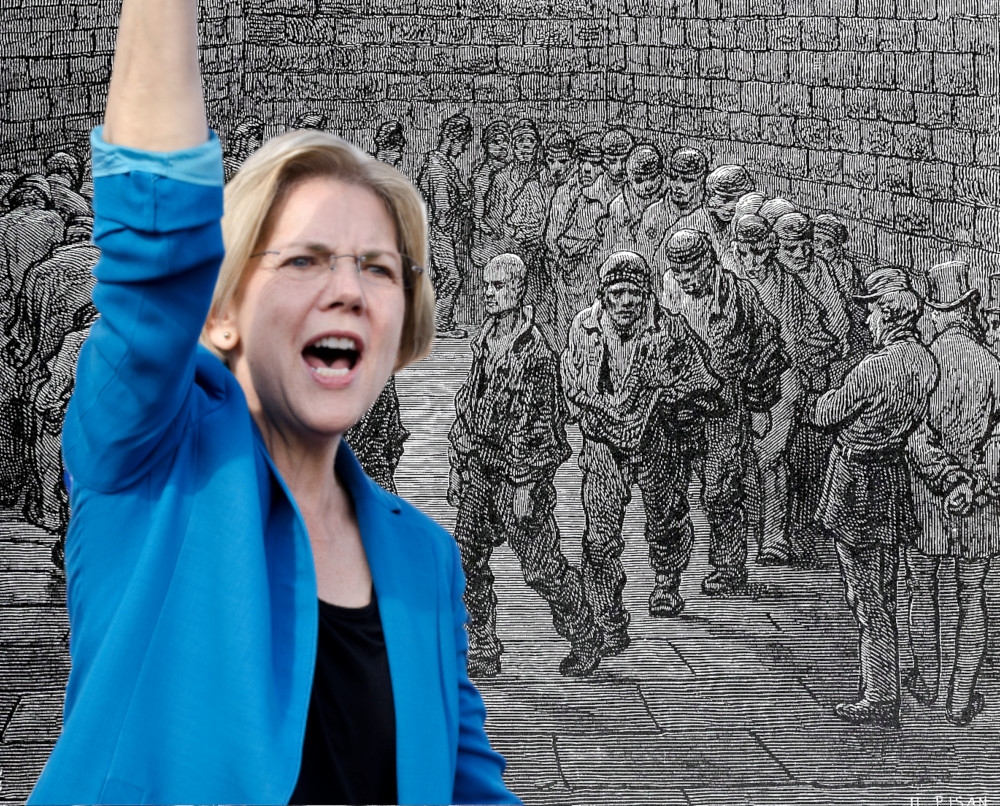 Elizabeth Warren has added another plank to her prodigious and admirable campaign platform of well-thought-through, progressive, sensible, popular proposals for a Warren administration: banning federal agencies (including ICE and the Department of Corrections) from contracting with private prisons. Warren also wants to stop contractors from charging inmates fees for essential services (including price-gouging on phone-calls, videoconferncing, mail, and email), and forcing contractors to comply with FOIA requests for information on their activities on behalf of government agencies.

However bad you imagine private prisons are, you're probably underestimating their awfulness. It's not just the slave labor, it's also the torture, the inhumane medical situation, the incredible violence, and worse. Private prisons are incredibly profitable, and some of those profits are used to draft laws that send more people to (private) prisons; the industry also pays out massive sums (we see you, Chuck Schumer) and their lobbyists are everywhere (looking at you, Beto O'Rourke); when all else fails, they're not above bribing judges to fill their cells with young, brown bodies.

When Obama tried to sunset federal reliance on private prisons, the industry responded by diversifying into immigration detention, halfway houses, and mental health and even though Trump reverse the Obama policy, immigration detention has ushered in a golden age of grifting for the industry, and the GOP #taxscam was especially kind to firms who earn their profits by imprisoning people.

The massive profits from private prisons have also been used to fund legislative initiatives to expand the industry at the state level, rather than improving the conditions in inhumane immigration detention centers, where things have been deteriorating for years.

Warren's federal ban isn't just a way of ending billions in grift by beltway bandits who wax fat at public expense: it's also a way of heading off a humanitarian emergency that is a stain on the nation's conscience.

I am a donor to both Elizabeth Warren and Bernie Sanders's campaigns for the 2020 Democratic presidential nomination.

Here’s what I’ll do:

* Ban private prisons and detention facilities. There should be no place in America for profiting off putting more people behind bars or in detention. That’s why I will shut down the use of federal private detention facilities by ending all contracts that the Bureau of Prisons, ICE, and the U.S. Marshals Service have with private detention providers. And I will extend these bans to states and localities by conditioning their receipt of federal public safety funding on their use of public facilities.

* Hold contractors accountable by expanding oversight, transparency and enforcement. It’s time to shine sunlight on the black box of private services that receive taxpayer dollars. I’ll close the ridiculous FOIA loophole that lets private prison subcontractors operate in the shadows. I will put in place an independent Prison Conditions Monitor within the Department of Justice’s Office of the Inspector General. The Monitor will keep contractors from cutting corners to make a quick buck by setting enforceable quality standards, regularly auditing and investigating contractors, and terminating their contracts if they fall short. I’ll direct the Department of Justice to prosecute companies that blatantly violate the law. And I’ll make sure companies are held accountable no matter who’s in the White House by allowing people to bring a lawsuit against abusive contractors who violate their rights.