My first attempt at smoking meat on a compact bullet smoker 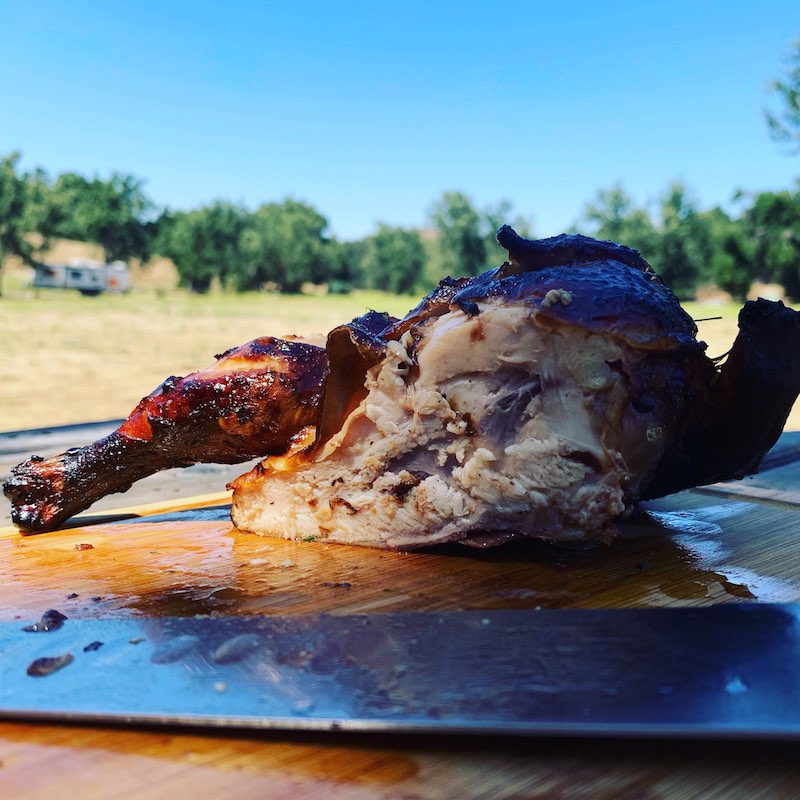 Smoking my dinner is the latest in slow 'n low cooking for me.

My brother, the actual bonafide chef in the family, got me addicted to smoking meat. While I've long been an enthusiast of sous-vide cooking, Brother Ben swears by his offset smoker. After visiting with his family for a bit, and eating a lot of barbeque, I was sold.

Smoking uses the same principles as sous-vide and also imparts a smokey flavor to your food. Thick, tangy and overpowering smoke, or just very delicate -- the choice is yours, sort of. Rather than immersing your food in a temperature monitored water bath, ala sous vide, smoking surrounds the food in warm smoke. You can find temperate controlled systems to make it a lot easier but that removes the fun of playing with fire for hours and hours.

Sous vide is easy, however, you plug in a circulator, put your meat in a plastic bag and away you go. Can smoking meat be as easy? After eating a few delicious meals of smoked salmon, turkey, pork and beef at my brother's, I wanted to spend my long days hanging around a campsite, living la vida Vanagon, smoking meat.

Offset, upright, pellet, gas, electric? What kind of smoker was the right one for me? My brother and I started watching lots of YouTube videos and it looked like a 'bullet smoker' also known as a 'water smoker' was the right way to go, for me. Bullet smokers have a fire right at the bottom, a water bath in the middle and a smoke/cooking chamber up top. They look like R2D2, but are a lot less finicky. Many YouTube competition style BBQ guys use the Cadillac of bullet smokers, a Weber Smokey Mountain.

I usually carry a Magma sailboat grill around with me, in the VW, to grill steaks, fish, burgers, and hot dogs. It takes up some space but I thought I could swap the grill out for a bullet smoker. I could not possibly fit the large size Weber, and even the smallest one seemed far too pricey for "maybe this won't work out." I bought, what was at the time, the cheapest bullet smoker I could find. The DynaGlo Compact Bullet.

The Dynaglo breaks into 3 sections and looked pretty easy for me to pack into the Van. It has a very nice fire ring that is well ventilated with two adjustable air inlets. A cheap as hell center section houses a door for access to the fire ring, so you may add more fuel if need be, and the top has a simple wheel style vent that is easy to adjust. There are two 18" or so grilling racks for food, and one big ol' bowl for water that goes in the very middle. There are some latches to hold the whole thing together too! The Dynaglo has it all and looks like it should get the job done.

There is also a thermometer mounted in the dome. It is useless.

I packed the smoker into my van, bought a bag of Kingsford Hardwood briquettes and some wood chunks. My first food item to be prepared was a chicken. First, however, I ran a load of coals through the smoker to heat it way up and burn off any of the manufacturing chemicals. I also wanted to see how hard it was to maintain a 225 or so smoking temperature.

First run-through was interesting. The Dynoglo's paint melts like a mad acid dream. The lid stuck to the center barrel, etc. Worse, however, was the thermometer. The needle pretty much started to spin around like an old Looney Tunes cartoon. I tried to fix it but only managed to get the indicator to stick in place. There would be no temperature measurement on my first smoke.

The coals burnt in the ring, smoke heated the top chamber, water evaporated from the bowl. Everything was doing what it was supposed to so I let the smoker burn down, and when it was cool I prepared to smoke a chicken!

I prepared the fire ring with a bunch of chunks of pecan and apple wood. I then dropped a mound of unlit coals over them, leaving a hollow in the center for hot coals. This is called the 'Minion Method' named after some guy named 'Minion' -- not for some clever 'the coals in the center slowly light the coals next to them and the smoker stays fueled for hours while smoldering the wood chunks' thing. A dude named 'Minion.'

Once I dumped the chimney of coals in the center of my pile and put the whole rig together, I close one of the bottom vents completely and left only about 1/3rd a hole open on each of the three holes down on vent #2. I left the top mostly open until I felt the heat coming out and saw smoke. I decided to try and run the smoker as cold as I could sans thermometer.

One spatchcocked and brined chicken went on the top grill skin and fat side DOWN. I was told to put the fatty skin facing the heat.

I was nervous and antsy but left the smoker alone. Delicious smelling smoke was coming out the top, and occasionally the sides of the smoker. The door can use some extra sealing. I could hear the chicken sizzling away in there. After 90 minutes I checked super chicken. I had read that 3 hours at around 225 should do it. At 90 minutes the bird looked beautiful. The friend who came to join me for dinner wanted to eat it right them. We waited another 45 minutes and it became clear the chicken was done.

Delicious! Nice bark on the outside, moist and juicy on the inside! We devoured that bird. I have heard it said you can not over smoke something in a bullet smoker. The smoke flavoring was distinct but not as strong as what my brother gets from the off-set smoker. I will try more wood chunks in there next time.

Today I am trying a tritip. Photos to come.

Watch the price on the Dynglo, I paid almost 40% less for it 1-2 weeks ago. I think it is still a bargain compared to a Weber, however. Also, yes, that is an Aston Martin behind my van.