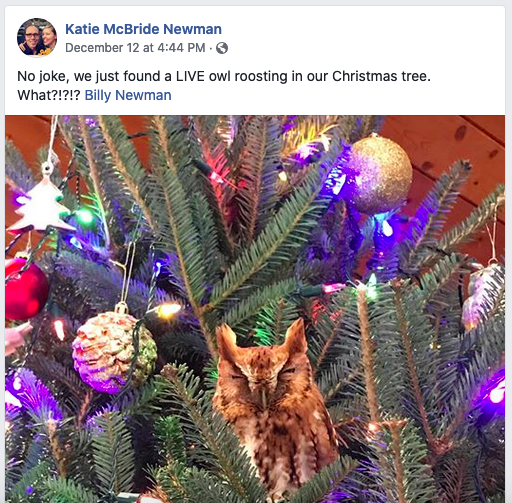 One Georgia family's viral owl Christmas saga started began on December 12, with this Facebook post: “No joke, we just found a live owl roosting in our Christmas tree.”

In the photo, an owl tucked in to the tree branches among lights and ornaments.

The local paper identified the critter as an Eastern screech owl, and the family says the bird was discovered when Katie McBride Newman's daughter was trimming the tree with owl ornaments. The girl “was both terrified and delighted,” the newspaper wrote.

Katie McBride Newman said Friday that she and her daughter spotted the bird on Dec. 12. They had bought the 10-foot (3-meter) tall tree from a Home Depot, brought it back to their Atlanta area home and decorated it with lights and, coincidentally, owl ornaments.

“It was surreal, but we weren’t really freaked out about it,” McBride Newman said. “We’re really outdoorsy people. We love the wilderness.”

The family opened windows and doors near the tree hoping the owl would fly away, but it didn’t.

“The owl seemed to be pretty comfortable, and I thought, ‘Hey buddy, it’s not going to go well if you just stay here. There’s no food, I’m sorry,’” said McBride Newman’s husband, Billy Newman. So the family called a nonprofit nature center for help. The Chattahoochee Nature Center caught the bird and helped the family release it.

Trump lies that travel ban is for 'jihadist regions,' says Democrat mayors wouldn't mind if terrorists blew up their cities

This press conference Donald Trump is doing in the Rose Garden today is really something else. Whew. After bashing Joe Biden, AOC, and the European Union, Trump just referred to his travel ban as restricting travel from “jihadist regions.” In a confused, stream-of-grievances rant, Trump said Biden wants to “end all travel bans including from […]