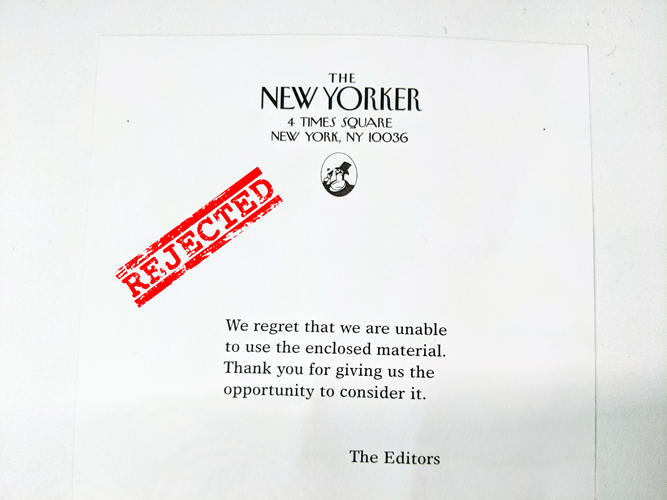 Someone in the comments of that Instagram post asked if they could buy of these rejects from him, something Drew hadn't thought to do. The following day, due to popular demand, he had started a Reject Sale. Ten original cartoons for $25:

REJECT SALE! If you are curious and/or want to help me get rid of my pile of rejected cartoons, write me an email from the Contact page of my website (link in bio) with your address. If you PayPal me $25 I will send you a stack of 10. How’s that sound?

I couldn't resist. I jumped on the deal and the other day the white envelope of ten of his cast-asides arrived. It was SO FUN to open. Everything he sent was real art, all made with a black Sharpie on an 8.5" X 11" sheet of white paper. And they're funny as hell! There was really only one I didn't fully "get" but my boyfriend explained it for me.

Here's one I think I'm going to frame:

I then wrote him to tell him how absolutely charmed I was by the whole experience, to ask if I could order some for my boyfriend (who was envious of my newly purchased stash), and to see if I could share his Reject Sale with all of you.

Here's part of what he wrote back:

One of my thoughts in doing this was asking myself: am I okay with people uploading these and posting about them in ways that are out of my control? After all, it's not my best work. These were rejected for good reasons. A lot of them are dated, unfunny, and potentially in bad taste to whomever receives them. I know if I was on the receiving end, the reason I'd want them in the first place is that it would be my little secret. Good quality or not, it's a collection of drawings that nobody else would have, an insight into a world that people don't ever get to participate in. But I would probably not be able to resist the temptation to post at least one. So, I decided that it would be silly to put any "please keep these to yourself" kind of stipulations on them for anybody else. They're yours!

Well, I like to share ideas, and this one is just too good to keep to myself...

Want a stack of his New Yorker rejects all to yourself? First, hurry. He's only got a limited supply left and when they're gone, they're gone. He's all digital now. Just write him through his contact page and, after he responds, you'll PayPal him the $25 ("friends and family" so he there's no fee).

images via Rusty Blazenhoff, the first one is embellished with a "rejection" stamp not found on an actual letter from the New Yorker (though I think that would be a nice touch)