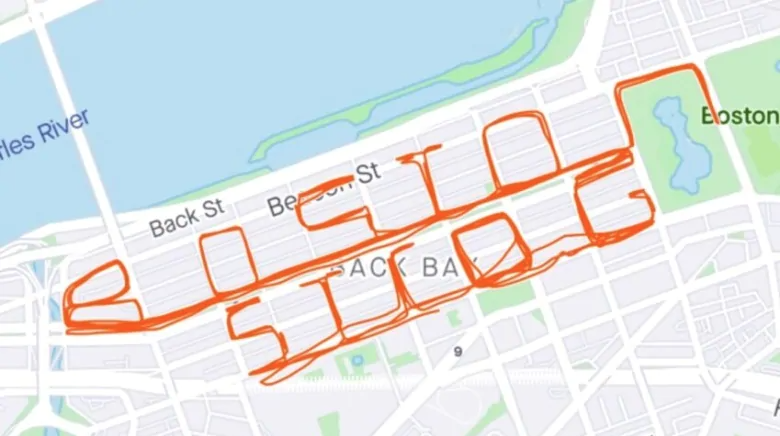 It's wicked weird, kid, being stuck at home in Boston this April week, exactly 7 years after the last time I was stuck in this same home during this same exact April week for very different but still terrifying reasons.

But it made me feel a little better when I saw that Lindsay Devers, a nurse anesthetist at Massachusetts General Hospital, had designed her own 26.2-mile running route around Boston's Back Bay, in a way that spell out "Boston Strong" — harkening back to that fateful week in 2013 when the bombs went off.

It wasn't until after this healthy healthcare heroine completed her solo marathon trek that she realized that she forgot the "n" in "Strong." From CBC Radio:

"I pulled up the app and I instantly was like, oh no, I spelled it wrong ," she said.

Despite the initial frustration, Devers is keeping a good sense of humour about the gaffe.

"I think a lot of people are inspired by it. And a lot of people have had some really good laughs," she said. "So I think it's a great comic relief in this stressful period."

Proud of my #MGH colleague ⁦@ladevers⁩ for her accomplishment and good sense of humor #bostonstrog 'Oh no, I spelled it wrong': Nurse runs solo marathon in shape of 'Boston Strog' | CBC Radio https://t.co/PJvZooyOdI

And honestly? That warms my quarantined heart even more.

Devers had already been training to run the Boston Marathon to raise money for Dream Big! Read the rest

HuffPo profiles Cheryl Fiandaca, the bureau chief of public information for the Boston police department, a former attorney and television journalist. The @Boston_Police's "CAPTURED!" tweet was retweeted about 143,000 times. Read the rest

"The images captured in Boston are validation of a three-year project in St. Louis to link 150 surveillance cameras into a single security system throughout the city’s central corridor, from the riverfront to Forest Park," reports Doug Moore at stltoday.com. This despite a statement by Boston's police chief that facial recognition technology system did not help find the suspects. How much you wanna bet the "surveillance imaging solved this crime" argument will lead to more forceful pushes for expanded surveillance imaging in any number of other American cities? (HT: @kgosztola) Read the rest

Dzhokhar Tsarnaev remembered by Twitter friends as "cool bro, average dude" with whom to "smoke blunts"

Laura Griffin collected some tweets from apparent real-world friends of Boston Marathon bombing suspect Dzhokhar A. Tsarnaev. The post-bombing tweets "from four people who know him, and old conversations they had with him" suggest that @J_tsar was a real Twitter account belonging to the 19-year-old suspect. Read the rest

How technology factored into the Boston bombing investigation

If you read one article on the role science and technology played in the Boston Marathon bombing investigation, make it this one in today's edition of The Washington Post:

Quickly, the authorities secured a warehouse in Boston’s Seaport district and filled the sprawling space: On half of the vast floor, hundreds of pieces of bloody clothes were laid out to dry so they could be examined for forensic clues or flown to FBI labs at Quantico in Prince William County for testing. In the other half of the room, more than a dozen investigators sifted through hundreds of hours of video, looking for people “doing things that are different from what everybody else is doing,” Boston Police Commissioner Edward Davis said in an interview Saturday.

The work was painstaking and mind-numbing: One agent watched the same segment of video 400 times. The goal was to construct a timeline of images, following possible suspects as they moved along the sidewalks, building a narrative out of a random jumble of pictures from thousands of different phones and cameras.

According to his friends, University of Massachusetts sophomore Dzhokhar Tsarnaev worked out, slept in his dowm room, and hung out with fellow students on the same day of the attack on the Boston Marathon, after the bombs went off. One student quoted in the Boston Globe who did not want to be identified said she saw Tsarnaev at a party on Wednesday night attended by some of his soccer team friends.

“He was just relaxed,” she said.

Depending on which acquaintance's quote you read, the 19-year-old either sounds normal or creepy:

Emily DeInnocentis, 23, said Tsarnaev stood out to her because of some odd behavior, like spreading messy string cheese all over her couch, and picking up her cat and carrying it upstairs for no reason.

“We just didn’t invite him over after that. How many people just pick up your cat and go upstairs?” she said.

Massachusetts state police released this video shot from their airwing helicopter hovering over a boat where the second Boston Marathon bombing suspect was found.

Interview with an expert in improvised explosive devices

At Scientific American, Larry Greenemeier has a piece about the science behind the three (possibly four) improvised explosive devices that killed at least three people yesterday in Boston. It might be easy to build bombs like these, but their DIY construction techniques also leave clues that help investigators find the people responsible. Read the rest