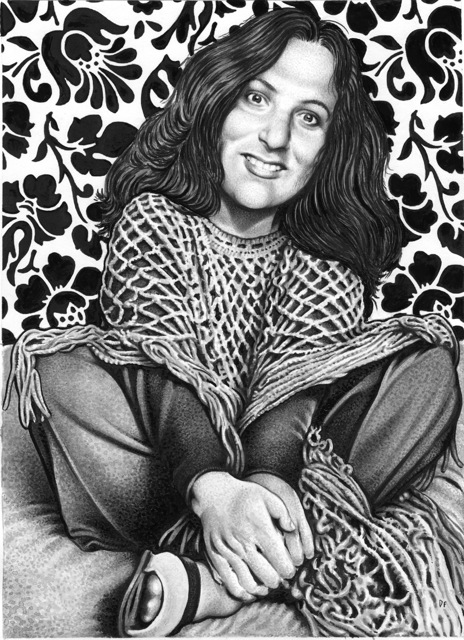 The fantastic Drew Friedman says: "My latest book project will be one hundred black and white portraits of underground comix icons presented as they were during that most fertile era of underground comix, 1967-1977, from Z to A, ZAP to ARCADE (with some stops before and after). Short biographies and samples of their work will also be included."

To me, this is a natural followup to my two Heroes of the Comics books that both focused on the great creators of mainstream comics, from the mid- thirties to the mid-fifties, now jumping a decade to the dawn of the undergrounds.

Underground comix was a counterculture movement that produced iconoclastic and wonderfully forbidden, no-holds-barred comic books and other small press publications focusing mainly on sex, violence and drugs, and featured comix and graphix produced by some of the greatest artistic talents and satiric minds of the day, most prominently the "father of underground comix," R. Crumb.

All of the essential players from that ten year era of undergrounds will be included: Frank Stack, Gilbert Shelton, Robert Crumb, Art Spiegelman, Bill Griffith, Diane Noomin, Denis Kitchen, Justin Green, Kim Deitch, Jay Lynch, Jim Osborne, Trina Robbins, Vaughn Bode, Howard Cruise, all the ZAP artists, the Bijou Funnies artists, the Air Pirates, etc, as well as several obscure, forgotten and black creators. This project should be completed by early to mid 2021 and published either later that year, or in 2022, depending on unforseen circumstances in the publishing world.

I love everything Drew does, and I'm really looking forward to this one. Read the rest 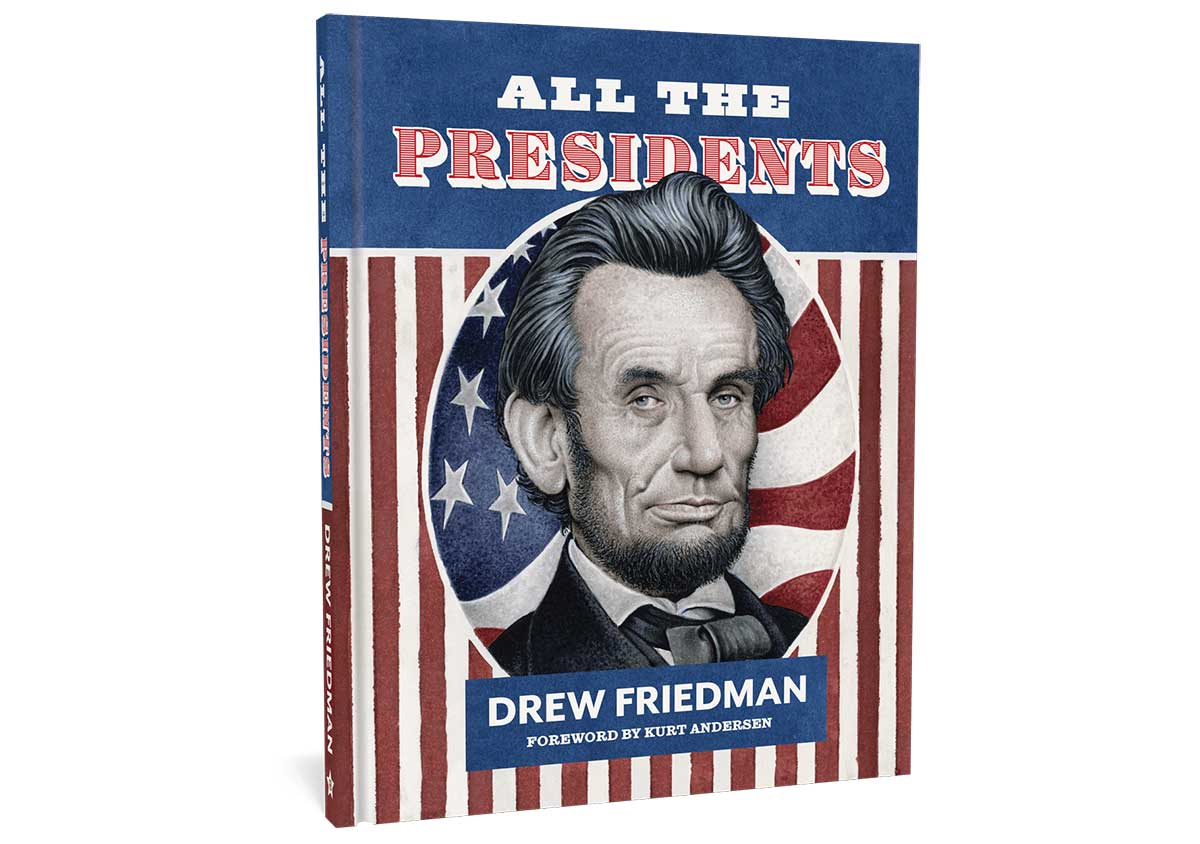 The great Drew Friedman took time to draw a portrait of every U.S. President. His work always blows me away (as you might guess, given the number of times I've posted about him). Below, a few samples from the book, which is called All the Presidents. It's published by Fantagraphics.

Some of these portraits will be on display at a Drew Friedman exhibition being held at Friends of the Libraries Gallery, Billy Ireland Cartoon Library & Museum, in Columbus Ohio, from November 2, 2019 - February 9, 2020. 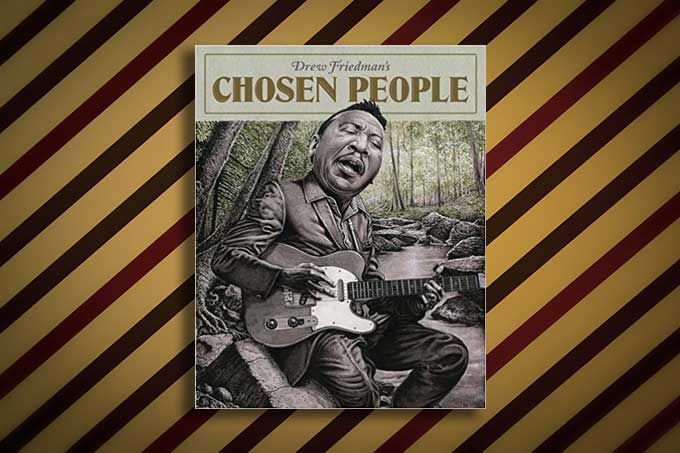 I've said before that Drew Friedman is the greatest living portrait artist, and his new book, Drew Friedman's Chosen People, offers proof of my claim. It's available for pre-order now.

Featuring over 100 of Drew Friedman’s hyper-realistic portraits of the greats, the near-greats, and the not-so-greats, created over the past decade. Artists, cartoonists, comedians, musicians, actors, politicians, the famous and the infamous, these chosen people are just that: People chosen to be rendered by the man Boing Boing calls “The greatest living portrait artist.”

You can catch Drew at two upcoming appearances: first in NYC at the Strand on Nov 15th, and second in LA at Book Soup on Dec 2nd, along with Merrill Markoe.

Here are some of Drew's portraits, which may or may not be in the book: 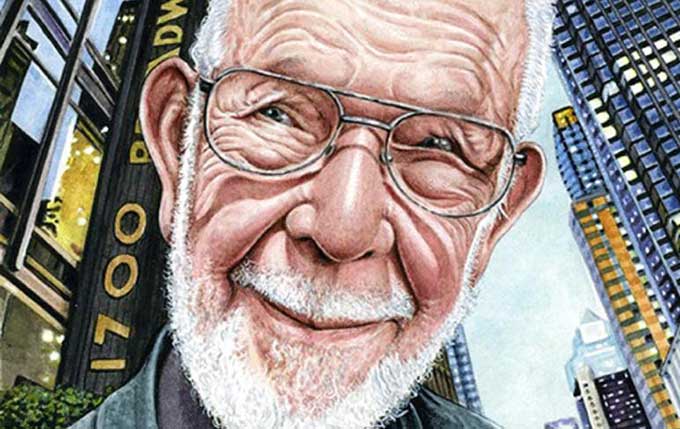 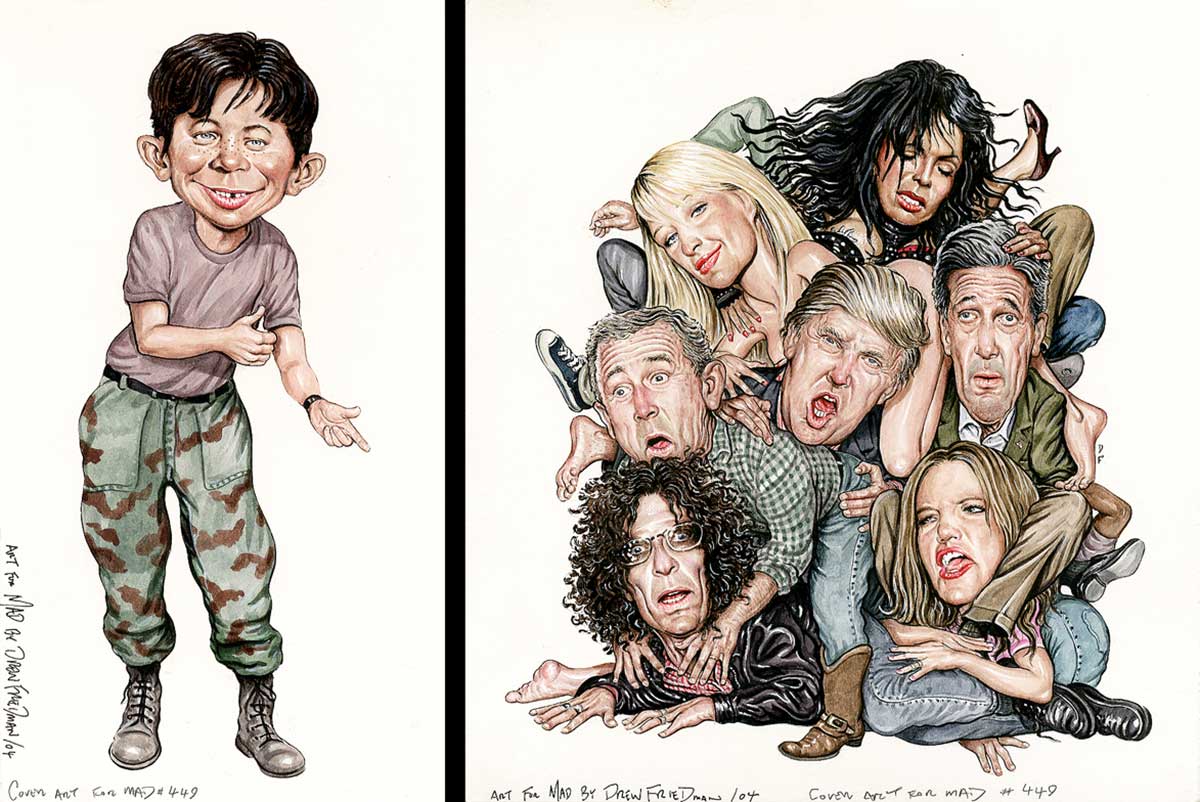 Drew Friedman is one of the best illustrators alive today. His work has appeared on the cover of MAD, Spy, and The New Yorker and his recent books about comic book heroes and Jewish comedians will go down in history as masterpieces.

I'm glad someone is making a documentary about Drew, called "Vermeer of the Borscht Belt." Kevin Dougherty is asking for $50k on Kickstarter. Read the rest 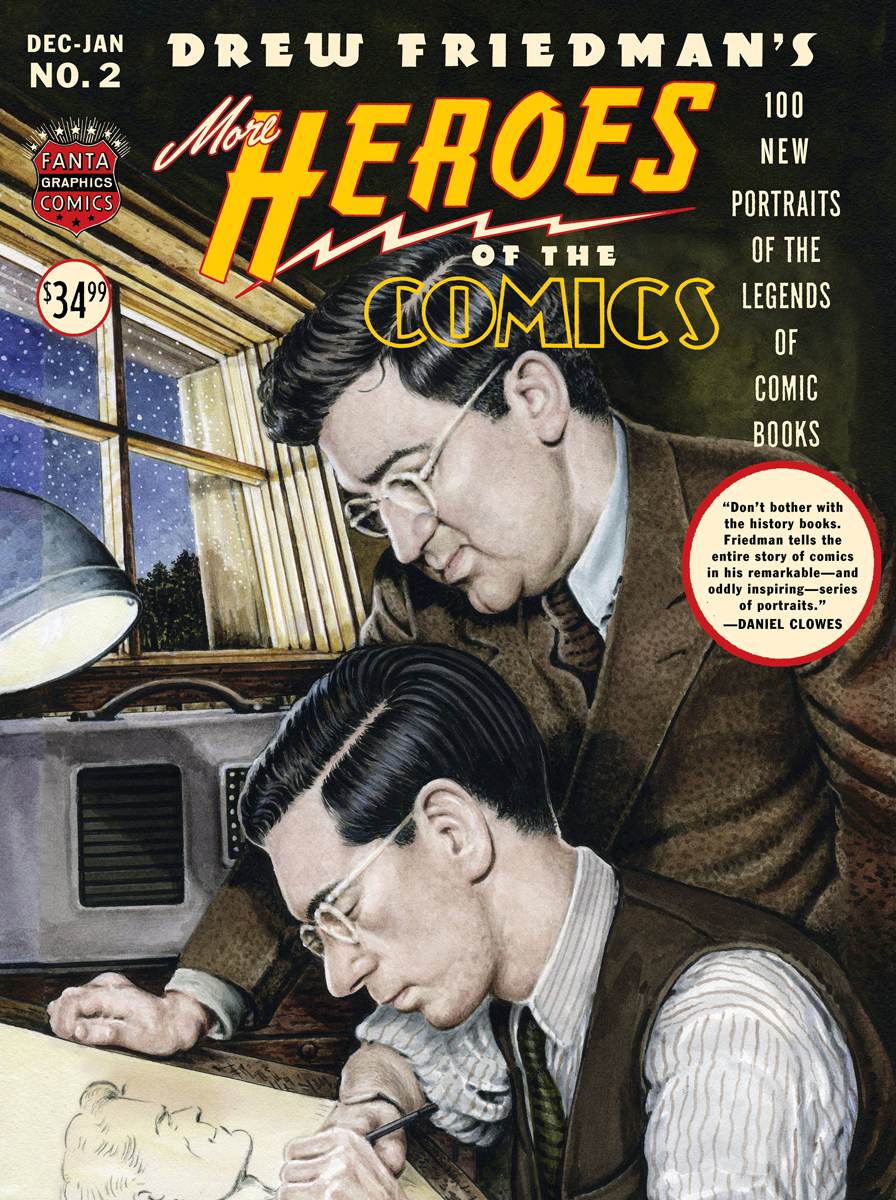 I raved about Heroes of the Comics when it came out in 2014. Now I'm going to rave about More Heroes of the Comics, the new companion volume. This large book has 100 meticulous color paintings of people who were involved in the early days of comic books, painted by Drew Friedman, the great portraitist of our time. Each hero portrait is accompanied by an interesting one-page biography.

While Friedman's first book covered the famous heavy hitters of comics (Kirby, Barks, Kurtzman, Wood), More Heroes digs deeper, profiling people who deserve recognition for their work, even though it was sometimes behind the scenes. I'd say about 75% of the names were familiar to me (Otto Binder, Ray Bradbury, Gene Colan, Dan DeCarlo, Jim Warren, John Buscema) while the other 25% were new, and, for that reason, even more interesting (Olive Bailey, Bob Haney, Louis Ferstadt - colorful characters!).

The two volume Heroes set, is scholarly and popular at the same time, and represents a milestone in the early history of comic books. Drew Friedman himself is a hero of comics for making it.

Also, there's an event tonight about the book at the Museum of Illustration in NYC. Drew Friedman will be signing advance copies of the book and join in conversation with Karen Green, MAD's Al Jaffee, and moderator Danny Fingeroth. Also, Jim Warren, the legendary publisher of Creepy, Eerie, Vampirella, and Famous Monsters of Filmland, will be there with Drew. I wish I could be there. Read the rest

Drew Friedman is the great portrait artist of our time. He’s always had an interest in the eccentric and the oddball, focusing on D-list celebrities like Swedish professional wrestler and actor Tor Johnson and late night monster movie hostess Vampira. Read the rest

Drew Friedman's portraits of the pioneering legends of comic books

Drew Friedman is the great caricaturist of our age. His series of portrait books, Old Jewish Comedians, More Old Jewish Comedians, and Even More Old Jewish Comedians brought him well-deserved acclaim when they came out a few years ago. His latest book of meticulous watercolor portraits is called Heroes Of The Comics, and it includes short biographies of dozens of famous and not-famous-but-important cartoonists, editors, writers and publishers from the golden age of comics. I had no idea what many of the comic book artists I've admired for decades looked like, and it was a treat to finally see the faces of Steve Ditko (Spiderman), Dave Berg and Jack Davis (Mad), and John Stanley (Little Lulu), rendered in Friedman's detailed style, replete with liver spots, wrinkles, and rumpled clothes.

Friedman even included one villain amongst the heroes: Frederic Wertham, the psychiatrist who used flawed data to write Seduction of the Innocent, the infamous 1954 anti-comics scaremongering book that led to the end of the vibrant comic book industry and the careers of many of the heroes in the pages of Friedman's book.

Heroes Of The Comics, by Drew Friedman

Take a look at other beautiful paper books at Wink. And sign up for the Wink newsletter to get all the reviews and photos delivered once a week. Read the rest

Cover for upcoming Fantagraphics book: Barracuda In the Attic

Drew Friedman illustrated the cover for his brother Kipp's upcoming memoir, Barracuda In the Attic. Cartoonist Daniel Clowes calls it "A detail-rich account of an unfathomably awesome childhood in the epicenter of 1960s - 1970s New York culture, and further evidence of the magnificence of the Friedman genes." (What a talented family! Older brother Josh Friedman wrote a great book about sleazy history of Times Square.)

Whether shooting pool with the mobster Crazy Joey Gallo, attending a dinner party hosted by an aged but remarkably spry Groucho Marx, or simply playing doctor with a classmate in the former estate of F. Scott Fitzgerald, Kipp Friedman led a colorful childhood. The youngest son of celebrated writer and satirist Bruce Jay Friedman, Kipp looks back fondly on the amusing and sometimes confusing events and encounters that helped shape his early life in this moving tribute to growing up among a family of creative artists — swept up in the whirlwind of the New York arts scene of the 1960s and '70s.

Barracuda In the Attic Read the rest