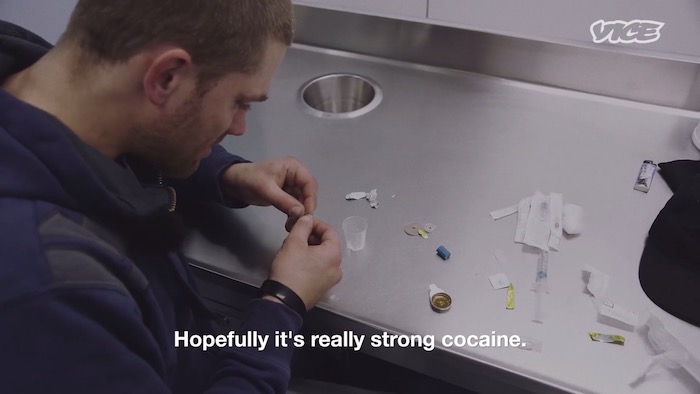 Vice has an interesting video about what happens when neighboring countries have different drug policies. (Uncensored version here.)

While Sweden rigidly sticks to its zero tolerance laws, liberal Denmark introduced drug consumption rooms (DCRs) in 2012, with special areas surrounding them where you won’t get arrested for drug possession if it’s for personal use. Copenhagen is home to one of the world’s largest government funded drug consumption rooms, H17, where users can safely smoke or inject their drugs with clean needles and medical staff on hand.

This has resulted in the local areas being safer and cleaner, as there are no longer thousands of used needles littering the streets. But Denmark’s liberal policy has had an unexpected consequence: an influx of heroin users from neighboring Sweden. We find out why Swedish heroin users prefer to sleep rough on the streets of Copenhagen rather than stay in Sweden, and which of these policies is most effective at tackling overdoses. 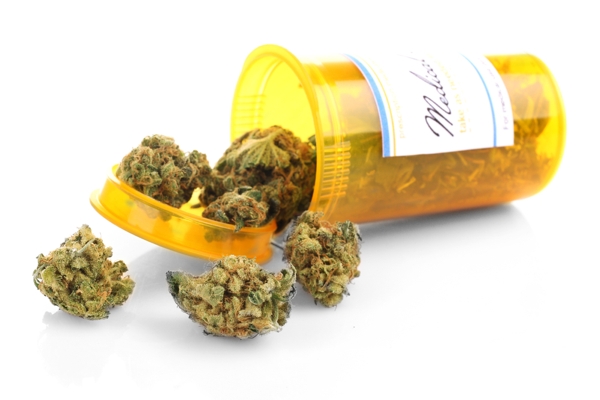 This video, which was released last year, was produced by the city of Amsterdam to warn tourists that heroin was being sold by street dealers as cocaine. The city set up signs and offered inexpensive drug test kits so people could test the street drugs they'd purchased and find out if it contained heroin. The video ends with the promise that drug users will not be arrested for using drugs or for reporting the discovery of white heroin, or for seeking medical help in an emergency. Could you imagine something this sensible happening in the U.S.? Read the rest

How do Balinese shroom dealers stay out of prison?

Indonesia has some of the most draconian drugs laws in the world. Smugglers and dealers face execution. (Earlier this year Andrew Chan and Myuran Sukumaran were put to death by firing squad for attempting to smuggle heroin into Australia). Magic mushrooms are also illegal in Indonesia. Possession could result in a minimum four-year and maximum 12-year prison term. And yet dealers sell them on the streets of Bali without much fear of the cops. David Allegretti of Vice interviewed some Balinese shroom dealers to learn the story.

Are you selling the same stuff as all the other dealers on the strip? Mushrooms yes, because most of us get it from the same guy. But cannabis no, the other guys don't want to sell the cannabis or any other drugs, they're too dangerous.

So why do you sell them? Because they're only dangerous if you sell or if you take them through the airport, but you're just a tourist and you won't have a lot. If the police stop you they'll just want a little money, maybe around 500,000 rupiah [approximately $40 USD]. They won't take you to the jail—too much work for them. They are lazy brother.

So you're saying the police are corrupt? Corruption is a dirty word. It's more that they don't waste time on small problems. Police are men, and every man is different. Maybe you can get one in a bad mood and he can cause problems, and that's why it's better to stay in your hotel and smoke.

Michele Leonhart, who has reigned over an out-of-control Drug Enforcement Administration since 2007, is expected to resign as administrator soon. Read the rest

Drug field tests used by cops are so bad they react positively to air, soap, candy

Crappy drug detecting kits used by police yield too many false positives. They result in wrongful arrest and imprisonment of innocent people.

Sage has been mistaken for marijuana; motor oil for heroin; jolly ranchers for meth; and breath mints for crack. In February, a Minnesota man spent months in jail after his vitamin powder tested positive for amphetamines. Soon after the arrest in Tampa, a Hillsborough police lieutenant conducted his own experiment on the NARK II tests, which cost between $15 and $20 for a box of ten. He found that just opening the test bag to the air produced the same shade of purple as exposure to methamphetamine, according to an internal memo. In February, the Hillsborough sheriff’s department announced it had switched to a different field test, made by the same company, which tests for a wider variety of illegal drugs. A spokeswoman for the sheriff’s department declined interview requests.

63% of Millennial age Republicans support legal weed, according to the latest PewResearch poll. 58% favor same-sex marriage, too. Most of the older members of their party are in disagreement. Read the rest

The lizard people who control the U.S. Senate confirmed President Obama’s nomination of Michael Botticelli to be the director of the White House Office of National Drug Control Policy (aka drug czar). Unlike the zero-tolerance drug warriors who preceded him, Botticelli has a background in public health, and is a proponent of medication-assisted treatment.

In the three years that he has played a leadership role in the drug czar’s office, Botticelli has demonstrated his commitment to advancing more science-based and compassionate drug policies. In public remarks, Botticelli has emphasized the need to expand treatment to people who need it, reduce stigma associated with drug use, and reduce collateral consequences following a conviction.

New Drug Czar is Better Than Predecessors Read the rest

Johann Hari, author of Chasing the Scream: The First and Last Days of the War on Drugs, learns about drunk elephants, the stoned water buffalo, and the grieving mongoose.

Screechy plastic replicant lady Nancy Grace gets a lesson from 2 Chainz about the dangers of weed prohibition. Read the rest

Obama’s Department of Justice says marijuana as dangerous as heroin

In December, Obama signed a bill containing a provision that prevents the federal government from interfering with states' medical marijuana activities. Yet, two weeks later, Obama’s Department of Justice filed "a strenuous defense of the drug’s Schedule I classification — the same category reserved for heroin."

This isn’t an abstract issue relevant only to constitutional obsessives. It’s a basic principle of ordered liberty that arises from even deeper foundations than our founding document. When the laws are in such discord and conflict as our drug laws are now, the enforcement of the law becomes of necessity an exercise in executive whim—compounding the capriciousness of arbitrary, selective application that Obama has made so conspicuous in his approach to governance.

At a time when the legitimacy and uniformity of government coercion has come into deep question among urban blacks in addition to suburban whites, the president needs to realize that in dithering on marijuana law he is playing with fire. His haphazard and contradictory mismanagement of America’s shift toward pot reform lends dangerous credence to the growing sense that our government no longer cares to guarantee our equal protection under the law.

The federal spending measure passed this weekend, and one of the provisions in it "effectively ends the federal government's prohibition on medical marijuana and signals a major shift in drug policy," reports the LA Times. The provision forbids federal drug agents from raiding retail operations.

I asked Ethan Nadelmann, executive director of the Drug Policy Alliance, if this was as big of a deal as it seems to be. He said, “It’s an historic vote in the annals of marijuana law reform. The disconnect between Congress and the vast majority of Americans regarding federal interference with state medical marijuana laws at last is over.”

Carrying on the sleazy tradition of professional liar Harry J. Anslinger (first commissioner of the U.S. Treasury Department's Federal Bureau of Narcotics), weed prohibitionists are stretching the truth and outright fibbing in a desperate attempt to reverse the nationwide trend towards legalization. Read the rest

Ethan Nadelmann, founder and executive director of the Drug Policy Alliance speaks with Amy Goodman on Democracy Now about the growing movement for drug decriminalization that is moving ahead in the United States.

Ballot initiatives on legalization of marijuana will go before voters in Oregon, Florida and Alaska in November. This comes two years after voter initiatives in Colorado and Washington state legalized recreational marijuana.

The full segment which also includes the Global Commission and its release of their new report "Taking Control: Pathways to Drug Polices the Work" can be seen here.

Science News: "Death rates from overdoses on prescription painkillers or heroin and other illicit drugs appear to be an average of 24.8 percent lower in states with medical marijuana laws than in states without the laws." Read the rest