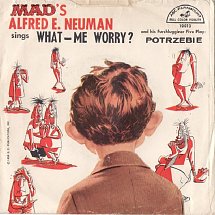 In 1959, MAD Magazine released a delightful 45 RPM single from Alfred E. Neuman And His Furshlugginer Five titled "What—Me Worry?" The B-side is the fine instrumental "Potrzebie." 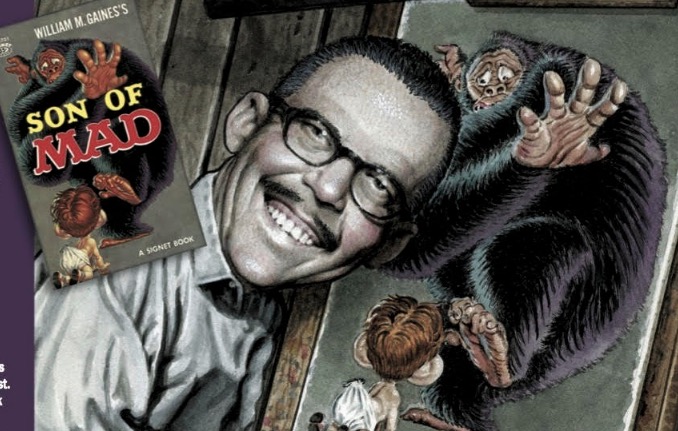 Drew's story and illustration page was art directed by Suzy Hutchinson, and is reprinted here with the kind permission of MAD. Read the rest 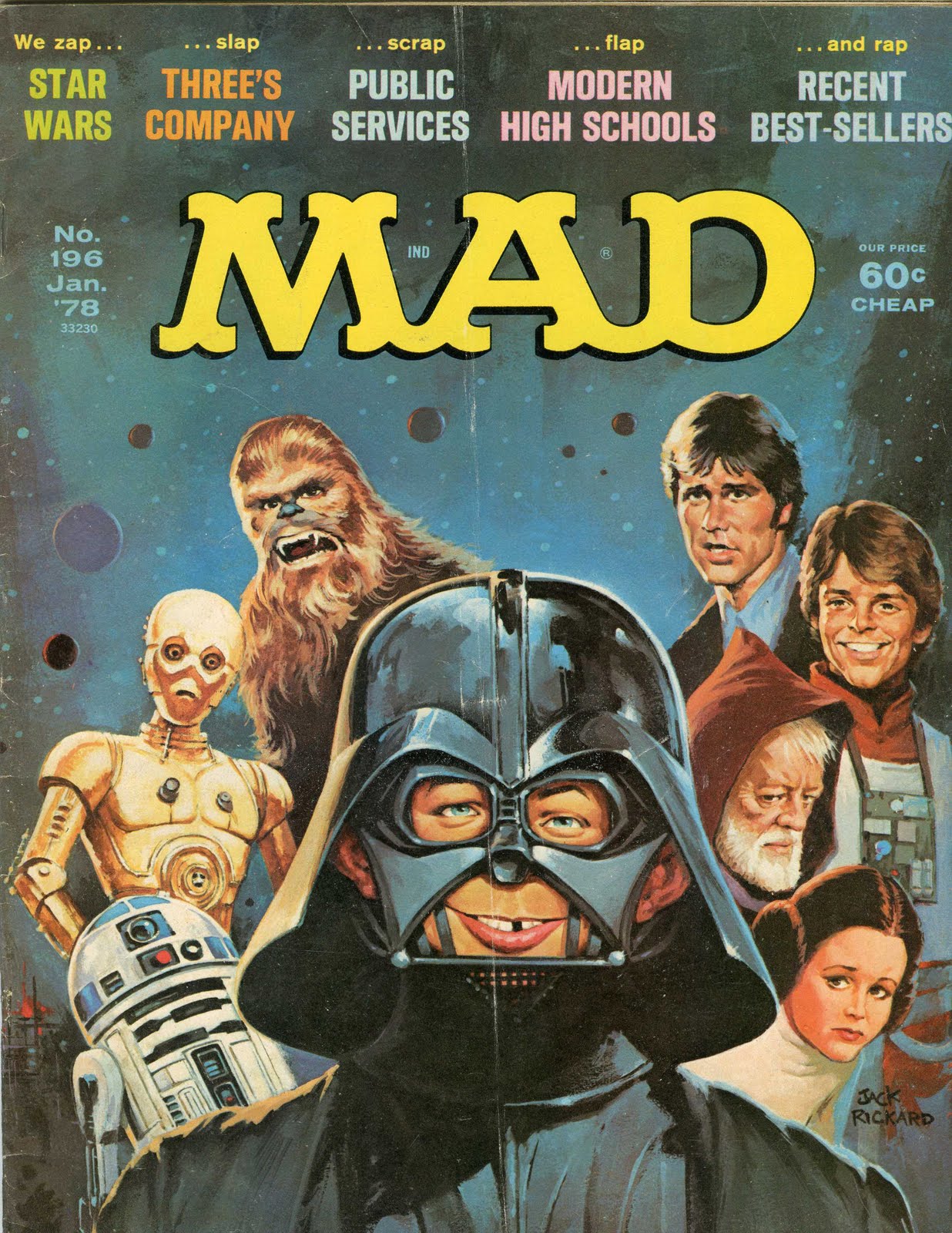 In 1978, the usual gang of idiots at MAD gave us "Star Roars," starring Lube Skystalker, Cree-Pio, Bar-stool, Ham Yoyo, Chewbacco, Zader, and Oldie Von Moldie. May The Farce be with you! Always. Below are a couple example strips but can see the entire parody here. 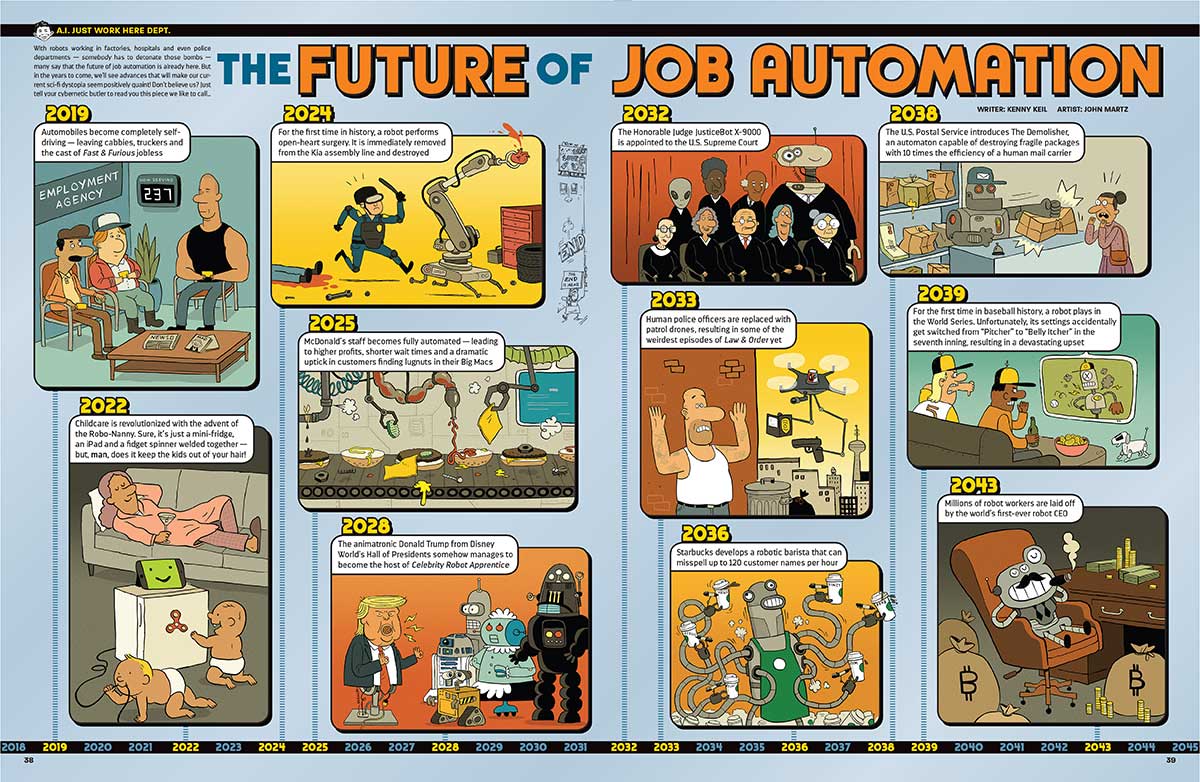 Basil Wolverton cover for an unpublished issue of Plop! 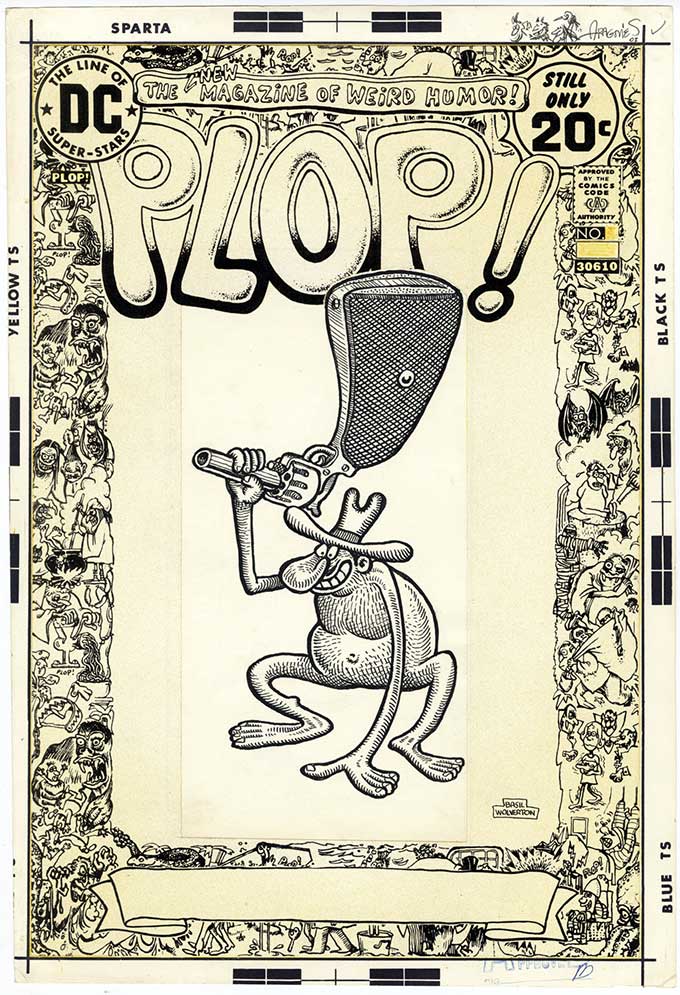 Plop! was a humor magazine published by DC from 1973 to 1976. I bought most of the copies when they were on the newsstand, and I still have them. It was an unabashed rip-off of Harvey Kurtzman's 1950s MAD, and not as good. The best thing about this self-described "New Magazine of Weird Humor!" were the covers by Basil Wolverton (who drew for MAD) and the marginalia by Sergio Aragones (another MAD artist).

The Bristol Board posted a high-res scan of this unpublished original Plop! cover by Wolverton/Aragones. What does it mean? I don't think it means anything, which is classic Wolverton. 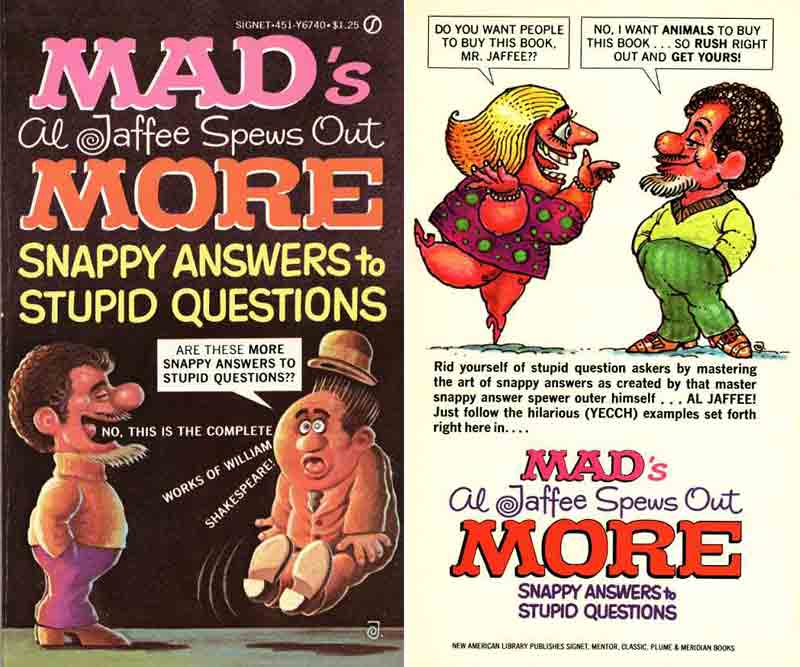 MAD "Fold-In" artist Al Jaffee has been a professional cartoonist for 73 years. Guinness World Records has certified him as the oldest working cartoonist. Sam Thielman of The Guardian recently interviewed Jaffee about his brilliant career.

Was there a particular kind of baloney you were attracted to satirizing?

Well, yes. The world is full of bloviators. And you find them in politics, and even religion, if I may say so, where somebody appoints themselves the spokesman for God. And this kind of stuff, when there’s someone on the public scene who’s really going beyond his duties as a politician or a religious leader or a sportsman, he’s fair game. The main thing about Mad is that it’s not a preachy magazine. It’s not selling one kind of politics or one kind of religion or sports team or anything like that.

The main thing is to keep your eyes and ears open and when you hear something that’s clearly baloney, such as “eight out of 10 doctors smoke Chesterfield cigarettes” – these are ads that actually ran! One of the tobacco companies had the nerve to claim that doctors prefer their cigarettes. So it’s easy to shoot down that kind of bull.

But you do it with a gentle hand, you don’t preach and say “tobacco kills! How can these doctors do that?!” No, you just go them one step further and say, “In addition to eight out of 10 doctors smoking this brand of cigarette, in their time off, they each drink a gallon of bourbon, which also has health benefits.”

How Cuba's greatest cartoonist fled from Castro and created 'Spy vs. Spy' 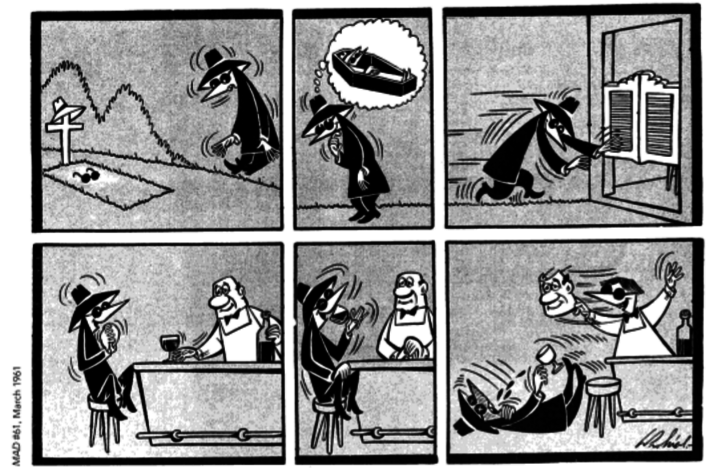 As a kid, my two favorite things in Mad magazine were the Fold-In and Spy vs Spy (which I pronounced "spyvisspy"). It was a wordless one-page comic about two oddly pointy faced spies, one dressed in black and the other dressed in white. Other than their different colored outfits, they behaved identically. They hated each other and created elaborate Rube Goldberg type machines to try to kill each other. Sometimes their machines worked, often, they’d backfire. They were tricky but usually too clever for their own good.

Atlas Obscura has an excellent article about Antonio Prohías, the creator of Spy vs Spy.

In New York, Prohías took work in a factory during the day, while working up his illustration portfolio at night. Taking inspiration from his supposed spy status, Prohías altered the look of El Hombre Siniestro, and gave him a counterpart, creating what we now know as Spy vs. Spy. In 1960, just months after moving to the city, Prohías, along with his daughter Marta who acted as an interpreter, walked unannounced into the offices of MAD Magazine. The editors were skeptical of the artist, but his silly spy gags won them over, and he had sold three of the strips to the magazine before leaving that day.

Spy Vs Spy: An Explosive Celebration, by Antonio Prohías and Peter Kuper, is an excellent book about Spy Vs Spy, with lots of sample strips. Read the rest 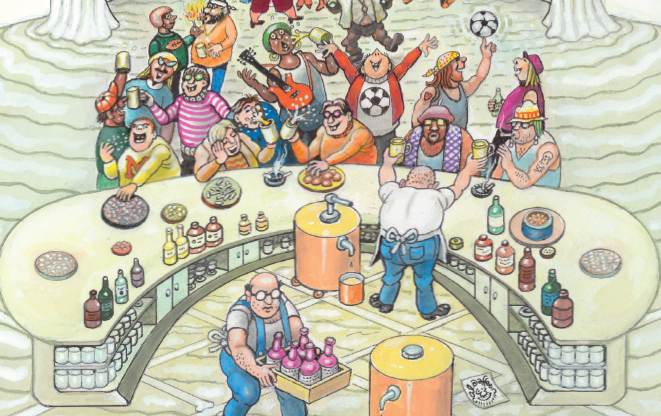 The back cover of MAD #539 features a Fold-In by newcomer Al Jaffee, who has only been cartooning for 73 years (61 with MAD). He shows promise, and I hope Mr. Jaffee (who turned 95 in March) enjoys a long career with the magazine.

The editors of MAD kindly gave Boing Boing dibs on being first to reveal the Fold-In, below:

This issue will be available on digital April 8 and on newsstands April 19. Subscribe here!

(In 2011, Ruben Bolling and I interviewed Al Jaffee on Gweek.) Read the rest

Feldstein began working at EC comics, publishers of Weird Science, Weird Fantasy, Tales from the Crypt, The Vault of Horror, and The Haunt of Fear in 1948. Soon he became editor of most of EC's titles. He typically wrote and illustrated a story in each title and drew many of the covers, a mind-bogglingly prolific output. Eventually he stopped doing the art for stories and stuck with editing, writing, and cover illustrations. According to Wikipedia, from "late 1950 through 1953, he edited and wrote stories for seven EC titles." I've always loved his signature, which features elongated horizontals on the F and the T, and an extended vertical on the N.

After MAD creator Harvey Kurtzman got in a fight with publisher William Gaines over ownership of the comic and left EC in 1956, Gaines put Feldstein in charge of the humor magazine, where he remained as editor until 1985.

Here's an excellent biography of Feldstein, which came out last year. Read the rest

Cory and I have both raved about MAD: Artist's Edition, a massive hardcover book of high-fidelity scans of original MAD comic book art pages from the 1950s, complete with pencil lines, rubber stamps, Zip-A-Tone, pasted-over panels, yellowing Wite Out, notes in margins, and other markings that add interest to the pages. The paper used in the book was selected to closely match the bristol board of the original pages. (Here's Cory's review, and here's my discussion of the book on Gweek).

When I discovered that IDW, publisher of the MAD: Artist's Edition released The Best of EC: Artist's Edition, I immediately ordered it, too. EC is the same publisher that published MAD, and it used the same stable of virtuoso artists and writers in the 1950s to produce some of the best comic book titles in history, including Weird Science and Tales from the Crypt. This edition includes art by Frank Frazetta, Harvey Kurtzman, Johnny Craig, Roy Krenkel, Bernie Krigstein, Joe Orlando, Alex Toth, and Al Williamson. I haven't received The Best of EC: Artist's Edition yet, but to give you an idea of how big the book is and how nice the scans look in the Artist's Series editions, I asked Jane and Anna to pose with my MAD book.

This photo of Ringo Starr reminded me of the above painting by Frank Frazetta, which appeared on the back cover of MAD #90 in October 1964. I remember seeing it when I was about 12 years old or so, and being just as fascinated by it as MAD's art director, Sam Viviano:

"The best use of MAD's back cover, for me, was as a vehicle for ad parodies, which were always so carefully put together that at first look they seemed to be the real thing. This back cover features a takeoff of the ads for Breck Shampoo which had been running for decades in magazines such as Ladies’ Home Journal and Harper's Bazaar. These ads featured pastel portraits of beautiful young women with silky long hair, rendered from 1936 to 1957 by Charles Sheldon and thereafter by the illustrator Ralph William Williams. (The campaign ended with Williams' death in 1976.) MAD's takeoff, with the headline, "Make Beautiful Hair BLECCH," portrayed — rather than a beautiful young woman with long, silky hair — a not-so-beautiful young man with long, silky hair (a novelty in 1964) — specifically, Ringo Starr, drummer for the Beatles. The portrait itself was painted with full Ralph William Williams lusciousness by infrequent MAD contributor Frank Frazetta. As an impressionable 11-year-old, I was fascinated by how a single image could be both beautiful and grotesque, precisely accurate and extravagantly exaggerated. It firmed up my ambition, already stoked by countless pages of Mort Drucker art, to pursue a career as a humorous illustrator."

The trailer for this MAD magazine documentary looks good! The filmmaker has interviewed a lot of the surviving gang of idiots. There are 3 days left to go and it's very close to being fully funded.

The Art of Harvey Kurtzman: The Mad Genius of Comics

Will Elder documentary project on Kickstarter Read the rest

Jaffee made his MAD debut in 1955 and joined the "Usual Gang of Idiots" in 1958. Since 1964, only one issue of MAD has been published without new material by Jaffee. He innovated the MAD back cover "Fold-In," which became a recurring feature, and his "Snappy Answers to Stupid Questions" arguably encouraged subsequent generations of snarky teens.

(Ruben Bolling and I interviewed Al on Gweek last year and it was a thrill to speak with him.)