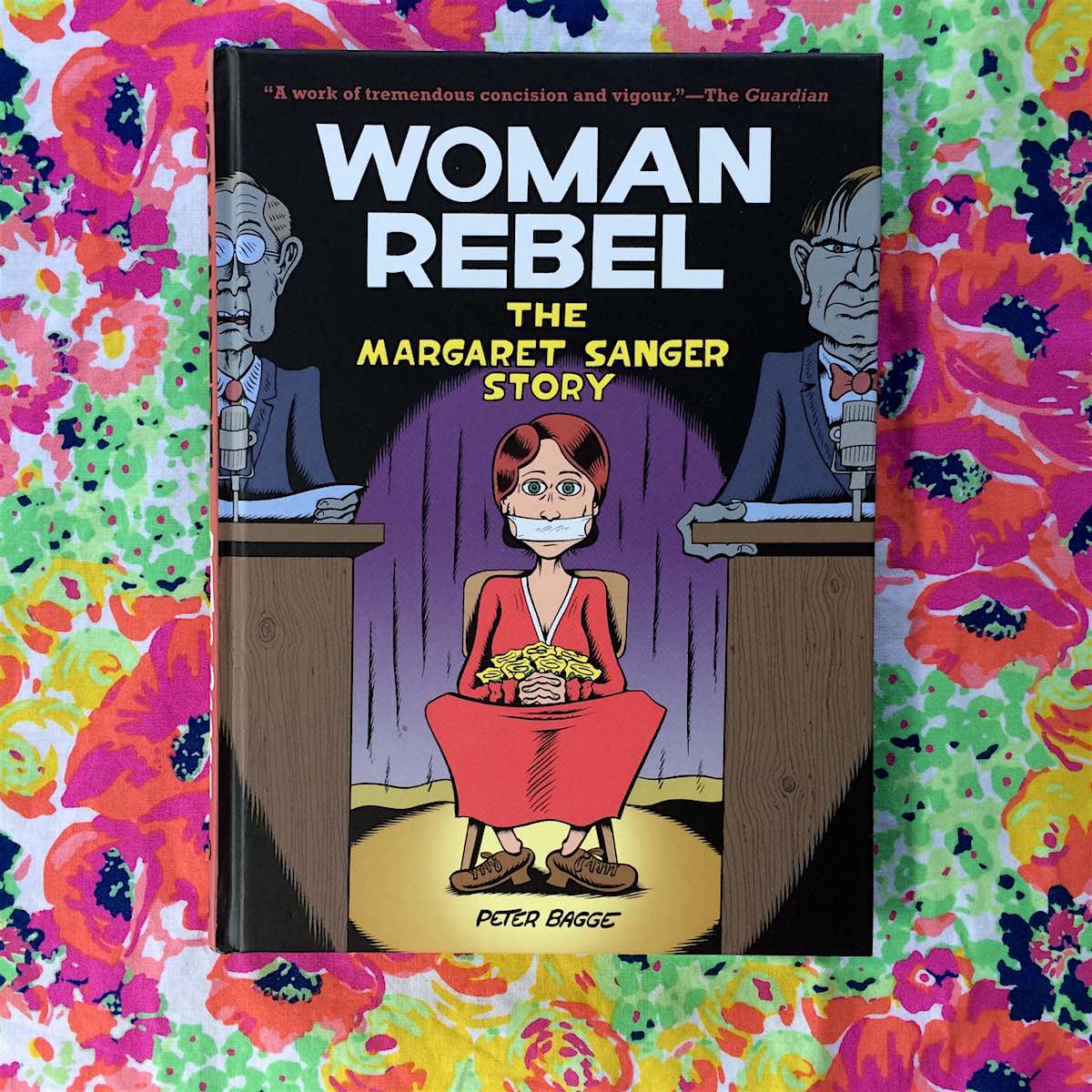 When I think of Peter Bagge, I think of his work in Hate or Neat Stuff, both comics about teenage angst and living in suburban malaise. Therefore, when I saw he wrote Woman Rebel, a biography of Margaret Sanger (the woman responsible for Planned Parenthood), I was curious. Once I started reading, it made perfect sense. Discontent, anger, and frustration with the status quo translate perfectly to the life of Ms. Sanger. Margaret Sanger is most famously known as the founder of Planned Parenthood and for her endless fight for women’s access to birth control in the early 20th century. The book highlights key moments in Sanger’s life – it starts with her childhood (she was born in the 1880s to Irish immigrants) and takes us through her early work as a nurse, mother, and eventual activist.

What makes this biography unique are Bagge’s illustrations. His faces, especially the contorted, frustrated ones that work in Bagge’s earlier work (say, on his teenage anti-hero Buddy Bradley) cross over really well. There is a lot of sadness and anger in Sanger’s life, whether it was her mother (who had 18 pregnancies in 25 years) or Sanger herself facing the many smug and misogynistic critics attempting to halt her progress. There is a lot of emotion in this book, the same that made Sanger persevere. Read the rest

In this episode of Recommended if You Like, a conversation with Peter Bagge, the Harvey Award–winning author of the '90s alt-comic "Hate." We met at Seattle's Whisky Bar and discussed the life of Planned Parenthood founder Margaret Sanger, who is the subject of a new biography by Bagge, "Rebel Woman."

And previously in Boing Boing podcasts: Mark's Gweek interview with Bagge, in which the cartoonist shares his take on a number of interesting books and records on the Boing Boing radar.

Interested in sponsoring one of Boing Boing's podcasts? Visit Podlexing! Read the rest

Peter Bagge is the Harvey Award–winning author of the acclaimed nineties alternative-comic series Hate, starring slacker hero Buddy Bradley, and a regular contributor to Reason magazine. He got his start in comics in the R. Crumb–edited magazine Weirdo. My co-host Peter Bebergal and I talked to him about his latest book, a graphic novel biography of the reproductive rights activist Margaret Sanger, called Woman Rebel.

We also talked about: Paul Kwiatkowsi's photobook/novel about "delinquent magic and chaotic adolescence" in "South Florida's lush and decaying suburban landscape," And Every Day was Overcast; and the singer/songwriter of The Shaggs' first album in 44 years, called Ready! Get! Go! And lots more!

On iTunes | Download episode | Listen on Stitcher Read the rest

Tell Me Something I Don't Know 015: Evan Dorkin & Peter Bagge

Peter Bagge began his career on R. Crumb’s Weirdo magazine as a cartoonist and then editor. He created Neat Stuff and Hate for Fantagraphics Books along with works for DC Comics, Marvel, and Dark Horse including the titles Yeah! (with Gilbert Hernandez), Apocalypse Nerd, and Other Lives. His latest work is the biography, Rebel Woman: The Margaret Sanger Story.

Evan Dorkin is best known for Milk & Cheese, Dork, and Superman and Batman: World’s Funnest (he also wrote and drew Bill & Ted’s Excellent Comic Book). He has written for a number of TV shows including Space Ghost Coast To Coast, Superman, and Welcome To Eltingville. He is the co-creator of Beasts Of Burden (with Jill Thompson).

GET TMSIDK: RSS | On iTunes | Download episode | Listen on Stitcher Read the rest