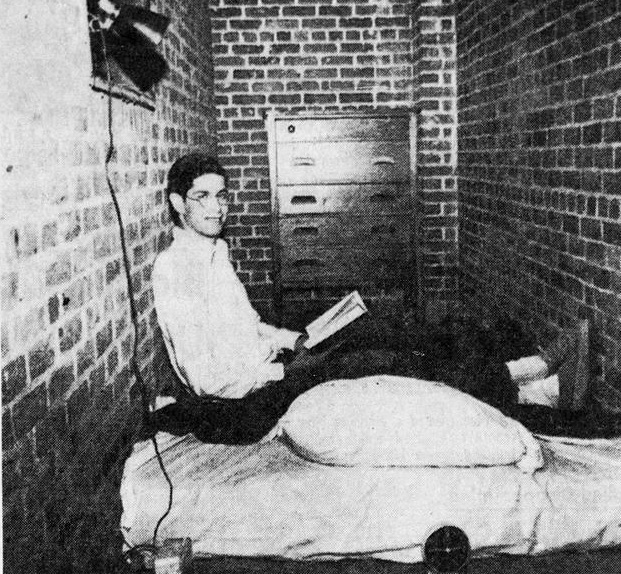 In college and grad school, I knew several students who couldn't afford housing and "lived" in the student lounges (showering in the rec center) and one guy who pitched a tent in the hills near campus. But this story of Allan Kornfeld who lived in a Yale ventilation shaft from 1963 to 1964 is the closest I've seen to Lazlo Hollyfeld's secret lair in the classic 1985 film Real Genius.

Kornfeld had hidden the entrance to the ventilation shift by covering the entrance with brick-patterned wallpaper. He left his DIY dorm room after graduation and shared his story with the press.

Ex-mayor of Bismark, ND trademarks alternatives to "Fighting Sioux" in bid to prevent UND team from switching to non-racist name 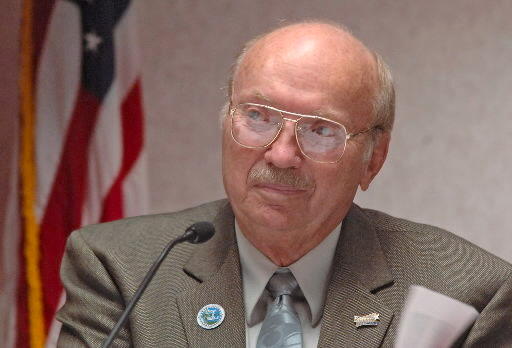 Marlan "Hawk" Haakenson used the state registry to claim Fighting Hawks, Nodaks, and North Stars in the mistaken belief that this would give him leverage to prevent the University of North Dakota from abandoning its racist "Fighting Sioux" team name. The NCAA has threated UND with sanctions if it doesn't change the team's name. Read the rest

Rutgers students taking exams are required to pay $32 in fees for Verificient's Proctortrack, an anti-cheating program that collects, audio, video, web activity and "scans the ID, face and knuckles" as well as voice-prints. Read the rest 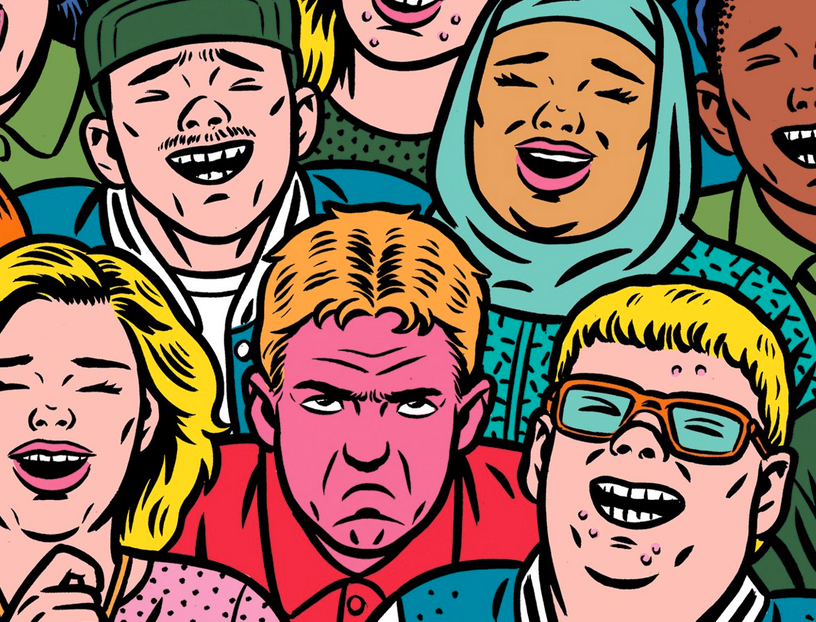 Caitlin Flanagan has written the funniest and most incisive glimpse into what it's like for today's road hacks whose livelihoods depend on navigating the treacherous waters of the college comedy circuit. Read the rest

A "very aggressive" turkey has apparently been terrorizing people on the University of Michigan's North Campus.

"Do not try to approach the turkey," deputy police chief Melissa Overton said. "We've gotten calls from people who have been trapped and unable to move because he's cornered them."

"He hasn't hurt anybody, but he's a very aggressive bird... He's also created a traffic hazard because apparently he likes to lay down in the middle of the road and not move. It can be very difficult for the buses to get around him."

Get a wee degree in free from RIT

The Rochester Institute of Technology has announced America's "first minor in free and open source software and free culture." (Thanks, Stephen!) Read the rest

LIBERAL PROFESSOR sends video of self being liberal to right-wing Campus Reform group, demands his $100 bounty for turning himself in

The people at Campus Reform (whose mission is to smash left-wing scum) are offering a $100 bounty for videos of "LIBERAL PROFESSORS" that lead to news stories. Kieran Healy, being a liberal professor, plans to snap up a C-note of his own from the group, whose founder, Morton Blackwell, also founded the Leadership Institute, which boasts such alumni as Karl Rove, Grover Norquist, and James O’Keefe. Here's Healy's entry. I think he's a shoe-in.

You may have heard that the Author's Guild is suing the HathiTrust, a coalition of libraries that is proposing to share their scans of some out-of-print books whose authors can't be located, passing them around among themselves. Corynne McSherry from the Electronic Frontier Foundation reviews the AG's lawsuit, and concludes that they don't have a snowball's chance. I'm in Ann Arbor, MI today, where the local university has been named in the suit -- I had a couple conversations with Hathi-ers today, and they all seem pretty sanguine about the Guild's suit.

Instead, the Guild makes much of imminent plans to make a small set of orphan works (i.e., in-copyright works where the rightsholder cannot be found) available to the university community – but here’s where the Guild’s standing problem arises. None of the owners of those works are part of the lawsuit. The Guild cannot sue on behalf of people who aren’t members, and who aren’t even known. Since it filed the lawsuit, the Guild has managed to identify a few potential rightsholders that the libraries had categorized as orphans, but they are still not parties to the lawsuit (and the libraries are pulling them from the list, as was always promised if a potential rightsholder came forward). To top it off, most of the defendants are state institutions, and therefore cannot be held liable for money damages for copyright infringement. See here and here for more detailed analyses.

The lawsuit gamely claims the libraries are causing “great and irreparable injury” to the authors the Guild claims to represent, as well as several additional individual authors, but it is hard to imagine what that harm might be.

Yale is making high-resolution images from its cultural collections available on a free, open access basis. They've started by uploading 250,000 images, with lots more to follow. The collection includes "a small limestone stela with hieroglyphic inscription from the Peabody Museum of Natural History, a Mozart sonata in the composer's own hand from the Beinecke Rare Book and Manuscript Library, a 15th-century Javanese gold kris handle from the Indo-Pacific collection of Yale University Art Gallery and a watercolor by William Blake."

As works in these collections become digitized, the museums and libraries will make those images that are in the public domain freely accessible. In a departure from established convention, no license will be required for the transmission of the images and no limitations will be imposed on their use. The result is that scholars, artists, students, and citizens the world over will be able to use these collections for study, publication, teaching and inspiration.

UPDATED: Valdosta State U promises prison sentences for students who use P2P

Update: John Newton, Director of IT for Valdosta State U, has issued this statement: "The Spectator article was, unfortunately, factually in error. While our process is not yet defined, we currently do not hand over students to the Police nor have we purchased software to hunt them down and I cannot foresee that we would ever do so. I hope to have a correction made as soon as possible."

Georgia's Valdosta State University has a new policy on P2P use: if their network spyware detects a student using P2P software, that student will be turned over to the police. The student newspaper promises felony punishments of up to five years imprisonment and fines up to $250,000 "per offense." When I was teaching at USC, my students were required to use P2P software as part of their coursework; I'm hardly the only prof who has advised students to use BiTtorrent to download legit, noninfringing material, or even to examine the catalogs of infringing works available as part of their coursework. And, of course, my own work is freely available on many P2P networks, under terms set out in the Creative Commons licenses I use. It's crazy enough that universities decide to spend tuition dollars in order to act as a private police force for some of the richest for-profit companies in the world; but enmeshing students in the criminal justice system and threatening them with prison sentences for using legitimate software is crazier still. Isn't there a law school at this uni who can explain how this stuff works to the (evidently thoroughly captured) administration? Read the rest

We've all heard "Underwater Basket Weaving" used as a synonym for easy, impractical college courses. Turns out that underwater basket weaving is challenging, rewarding, and offered by at least two American universities: UCSD, and Saint Joseph's College Indiana. So whence the joke about UBW?

The earliest reference to the term that I could find, searching on Newspaper Archive, was May 9, 1960. The author of a Pasadena Independent trivia column noted that "Son Herbert reports that underwater basket weaving is all the rage among college students who want to spare the brain cells." So evidently the joke had been well established by 1960. I would guess the origin of the term dates to the late 1950s. Did the joke start after a college actually began offering this course? I don't know, but it seems possible.

MIT's The Tech has the results of a wide-ranging survey of the sex-lives of the university's undergraduates. It's not very scientific (the respondents were self-selected, and 60% of the student body didn't respond), but the charts and commentary are a fun read. I'm particularly taked by the idea of a taboo against "floorcest" (shagging someone whose room is on the same dorm floor as yours).

The University of Georgia has fired Dorin Lucian Dehelean, a security analyst who was responsible for passing on RIAA copyright infringement notices to the student body, alleging that he demanded bribes from students to make the record of their supposed infractions go away.

According to UGA campus police chief Jimmy Williamson, Dehelean "offered to make the situation go away in exchange for money." He promised not to inform Judicial Programs, so the student in question would be free from any kind of disciplinary measures the University usually takes in similar cases.

The student in question didn't have any money and alerted a University employee who called in the police. The police decided to look into the case and sent over an undercover officer who went over to Dehelean, impersonating the student.

After Dehelean accepted the payment he was fired immediately and taken into custody for extortion practices. According to the campus police, Dehelean may have tried the same trick with other students, and they believe that at least one other student paid up.