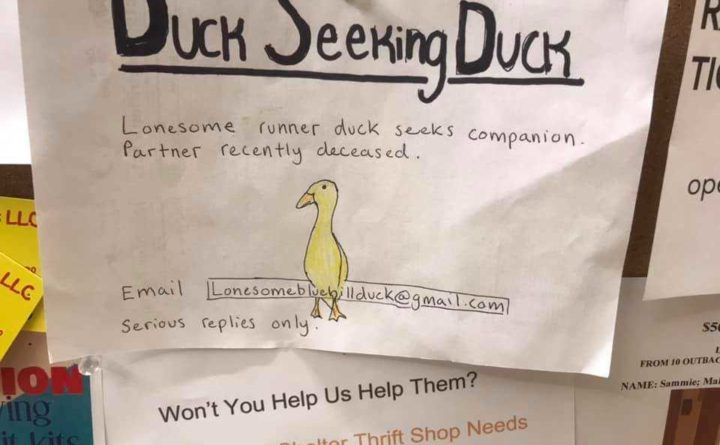 A man in Maine realized one of his female ducks was heartbroken after a bobcat “snatched her two fellow ducks from owner Chris Morris’ yard on Dry Moon Lane about two weeks ago.”

So Mr. Morris, who is a special ed teacher, created this little lovelorn duck wanted ad and posted it in the local co-op.

“We wanted to post about this to try to find a duck, and that just seemed like the best fit,” Morris told the Bangor Daily News, which reports that the ad led to something new:

Sadie Greene knew exactly what Morris was looking for when she saw the bulletin board posting.

“We have a slew of male ducks, so [Morris] will be able to take his pick,” Greene said. “Ducks are one of the few species that mate for life, so when they lose their partners, they tend to mourn, but they can replace their partners pretty quickly, so it will be interesting to see what happens.”

Greene and Morris are arranging a meeting for the ducks on Sunday. Yellow Duck’s favorite food is slugs, and they might be on the menu for the big date, Morris said.

May You Find The One.