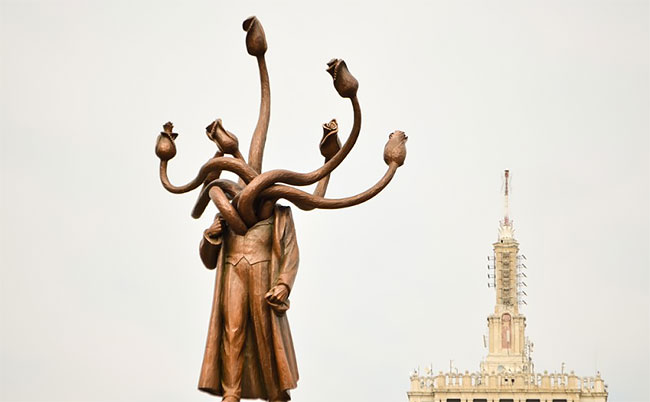 The photo is sadly uncredited by the source, which has many more. Read the rest

Every time the head of a Lenin statue breaks off, Steve Bannon sheds a tear. Read the rest

lenin / mistakes were made

A fluorescent statue of a urinating VI Lenin has been erected in Nowa Huta, a town built by the old Stalinist regime. The Soviet-era Lenin that stood in the spot was subjected to multiple unsuccessful attempts by activists to blow it up. The new statue, "Fountain of the Future," is a temporary installation that is meant to spur debate about what statue should be permanently installed in its place. Read the rest

Statues of Lenin with a boner for communism

Any statue of a man with one hand held out before him at waist height can be photographed in profile in such a way that the extended hand looks like a big ole boner. And Soviet-era statues of Lenin have this posture in spades. Hence this collection on Lenin monuments sporting vast, steely commie-ons. (Famously, you can reproduce this effect with the famous "Partners" statue at Disneyland, which depicts Walt holding Mickey's hand; from the right angle, Mickey's nose becomes Walt's stiffy).

A Different Angle of View on Lenin Monuments