IMF: Cheap oil will bankrupt the Saudis in five years

If oil stays below $50 a barrel for five years, the Saudis' cash reserve will be exhausted, and with it will also go the social stability that lavish spending for the Saudi elites brings. Read the rest

What's the best oil to cook with? 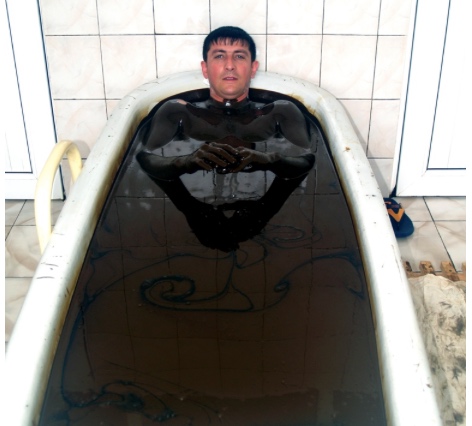 You can visit a spa in Naftalan, Azerbaijan and relax in a bath of crude oil, a "medicinal treatment" that apparently goes back to the 6th century. Careful though, the oil contains naphthalene, a possible human carcinogen. Read the rest

Alan sez, "So there's this woman who decided she wasn't going to give Keystone XL passage rights through her land in Texas. Not even for the few tens of thousands of dollars they offered. And then the story gets weird.

In Texas, companies (like TransCanada) can use eminent domain. All they have to do is declare themselves a 'common carrier' which is apparently a one-page form you have to fill out. Keystone did that and then took Julia Crawford's land." Read the rest

For the working class and poor, fracking is one of the last bastions of upward mobility

There are many downsides to hydraulic fracturing and the natural gas it's used to harvest, but for the people who work in America's booming oil and gas fields there's a positive that outweighs a lot of the problems other people worry about. At High Country News, Jonathan Thompson writes about the financial benefits fracking holds for families, especially those where the people working don't have a college degree. With fewer and fewer well-paid manufacturing jobs, hydrocarbons are one of the few industries left where your job can improve your kid's chances of reaching a higher income bracket. Read the rest

Under Canada's newly gutted environmental laws, members of the public who want to comment on the upcoming hearings on the new Enbridge oil pipeline must beg for permission by fillling in an obscure, ten-page questionnaire and submitting a CV. It's as though the Harper government has fingerpainted FUCK OFF AND DIE on Parliament in heavy crude.

“The new rules are undemocratic. They attempt to restrict the public’s participation in these hearings and prevent a real dialogue about the environmental impacts of the Line 9 pipeline project,” said Adam Scott of Environmental Defence. “Canadians should not have to apply for permission to have their voices heard on projects that carry serious risks to their communities.”

Under the new rules, any Ontario resident who lives along the 639-km pipeline route who wants to send in a letter about their concerns must first apply to the NEB for permission to send in a letter. As of today, the public will have just two weeks to fill out a 10-page form which asks for a resume and references.

“Since when does someone’s resume determine if they have the right to be concerned about what’s happening in their home community?” said Keith Stewart of Greenpeace Canada. “Anyone who lives and works in southern Ontario could be affected by a spill and everyone is affected by climate change. The right to send a letter of comment and have it considered by public agencies is part of the basic rights and freedoms Canadians enjoy.”

Line 9 runs directly through the most populated part of the country, through backyards, under farms and next to schools.

Expect to see a lot fewer images of toxic sludge creeping through small communities, thanks to the hard work of ExxonMobil. The company could have used its prodigious resources to make its oil pipelines more secure, preventing town-destroying leaks like the one that hit Mayflower, Arkansas. But they figured out that it would be cheaper to just corrupt the local law to chase reporters out and get the FAA to establish a Temporary Flight Restriction zone over the spill. Problem solved!

Michael Hibblen, who reports for the radio station KUAR, went to the spill site on Wednesday with state Attorney General Dustin McDaniel. McDaniel was in the area to inspect the site and hold a news conference, and Hibblen and a small group of reporters were following him to report on the visit. Upon arrival, representatives from the county sheriff's office, which is running security at the site, directed the reporters to a boundary point 10 feet away that they should not pass. The reporters agreed to comply. But the tone shifted abruptly, Hibblen told Mother Jones on Friday:

It was less than 90 seconds before suddenly the sheriff's deputies started yelling that all the media people had to leave, that ExxonMobil had decided they don't want you here, you have to leave. They even referred to it as "Exxon Media"…Some reporters were like, "Who made this decision? Who can we talk to?" The sheriff's deputies started saying, "You have to leave. You have 10 seconds to leave or you will be arrested."

A developer made a game that's a spin on the old "waterworks"/"pipe mania" type game with an oil pipeline theme... complete with pixel-art anti-pipeline protesters.

Like most indie developers, they were eligible and applied for funding from a variety of sources.

They are donating a portion of the proceeds to the David Suzuki Foundation.

Apparently this made some blowhards angry, who think that "tax dollars funded the game" and shouldn't fund a game about blowing up pipelines, and that the developer donating to a non-profit charity somehow constitutes an ethics violation, having received so-called "tax-dollar funding".

Tax breaks and grants and things are available to all sorts of content and media producers in Canada. Game development and film production and the like are industries that are very active here. It's also not illegal to donate proceeds to non-profit charities.

Writing in Rolling Stone, Bill McKibben brings us global warming's "new math," a collection of scary stats about the record-setting shifts in the world's climate, from the hottest rainfall ever recording (109' F in Mecca) to the record-breaking increase in the number of broken records in worldwide weather. McKibben's second set of numbers are the financial numbers -- companies borrowing against fossil hydrocarbons that are still in the ground, effectively incurring an obligation to dig them up and burn them -- that explain why no one is doing anything about the first set.

June broke or tied 3,215 high-temperature records across the United States. That followed the warmest May on record for the Northern Hemisphere – the 327th consecutive month in which the temperature of the entire globe exceeded the 20th-century average, the odds of which occurring by simple chance were 3.7 x 10-99, a number considerably larger than the number of stars in the universe.

Meteorologists reported that this spring was the warmest ever recorded for our nation – in fact, it crushed the old record by so much that it represented the "largest temperature departure from average of any season on record." The same week, Saudi authorities reported that it had rained in Mecca despite a temperature of 109 degrees, the hottest downpour in the planet's history.

Not that our leaders seemed to notice. Last month the world's nations, meeting in Rio for the 20th-anniversary reprise of a massive 1992 environmental summit, accomplished nothing. Unlike George H.W. Bush, who flew in for the first conclave, Barack Obama didn't even attend.

Chinese-built ghost town in Angola - the first of many to come?

The BBC's Louise Redvers reports on the ghost town of Kilamba, Angola, a horrendously expensive high-rise enclave built by Chinese companies on a line of credit secured with Angolan oil, which has only seen 220 apartments out of 2800 sold. Kilamba is the most ambitious of several new towns being built outside of existing Angoloan cities by Chinese firms.

It's like a bizarro-world version of the Keynsian idea of getting the economy going by paying one group of laborers to dig holes and another to fill them in. But in this case, one group of workers are paid to pump oil, which is offshored to China. In exchange, a group of Chinese workers is paid to build a gate-guarded enclave for a non-existent pool of mega-rich locals that no one can afford to live in, and which gradually turns into a massive liability. Profit!

The place is eerily quiet, voices bouncing off all the fresh concrete and wide-open tarred roads.

There are hardly any cars and even fewer people, just dozens of repetitive rows of multi-coloured apartment buildings, their shutters sealed and their balconies empty.

Only a handful of the commercial units are occupied, mostly by utility companies, but there are no actual shops on site, and so - with the exception of a new hypermarket located at one entrance - there is nowhere to buy food.

After driving around for nearly 15 minutes and seeing no-one apart from Chinese labourers, many of whom appear to live in containers next to the site, I came across a tiny pocket of life at a school.

At a private party hosted by †, a model rig malfunctioned and spooged its dark ichor all over a guest. "I can't turn it off!" says one hapless organizer. Adds another: "Why are you filming? Can I have that phone, please?" [Read more: Occupy Seattle]

†Update: If you thought the irony too delicious for words, you were right: it's a hoax! Gawker's Adrian Chen got to the bottom of it. Read the rest