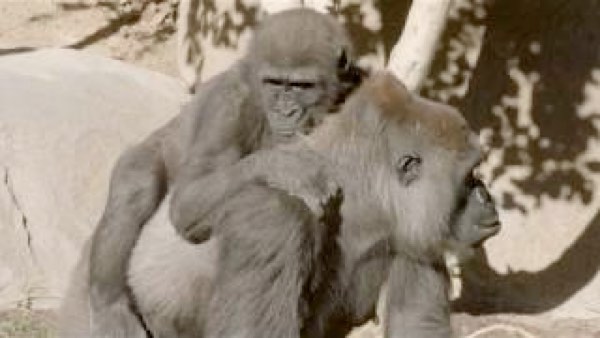 At UC San Diego, a group of experts came together to try and preserve the eyesight of 3-year-old gorilla who lives at the San Diego Zoo Safari Park. Read the rest 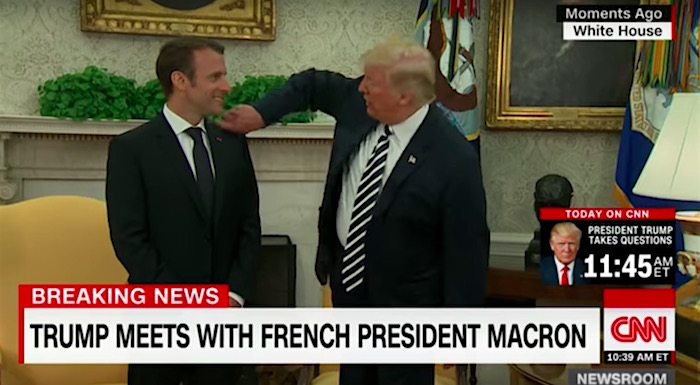 Trump never ceases to show himself as the uncouth buffoon that he is. During his Oval Office meeting with French President Emmanuel Macron's this morning, he went into chimp mode by picking and wiping off a supposed piece of dandruff from the French president's jacket. President Macron was a good sport about it, pretending it was normal for one world leader to groom another in public. Yeesh. Read the rest 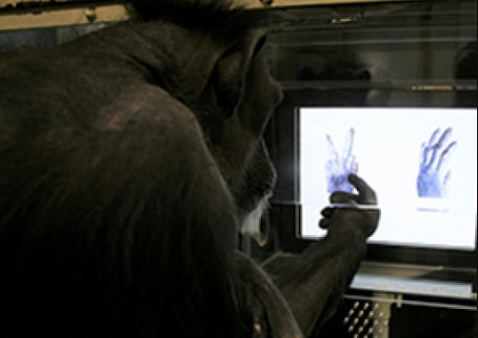 Chimpanzees at Kyoto University's Primate Research Institute have learned to play the game rock-paper-scissors. From Phys.org:

(Seven chimpanzees) sat in a booth housing a computer-based touchscreen and were trained to choose the stronger of two options (based on the rules of the game) they saw on screen. They first learnt the paper-rock sequence, then the rock-scissors one and finally the scissors-paper combination. Once they knew how the pairs fitted together, all the different pairs were randomly presented to them on screen. Five of the seven chimpanzees completed the training after an average of 307 sessions.

The findings show that chimpanzees can learn the circular pattern at the heart of the game. However, it took them significantly longer to learn the third scissors-paper pair than it did to grasp the others, which indicates that they had difficulty finalizing the circular nature of the pattern.

"This suggests that children acquire the ability to learn a circular relationship and to solve a transverse patterning problem around the age of four years," says lead researcher Jie Gao. "The chimpanzees' performance during the mixed-pair sessions was similar to that of four-year-old children."

"Learning the rules of the rock–paper–scissors game: chimpanzees versus children" (Primates) Read the rest 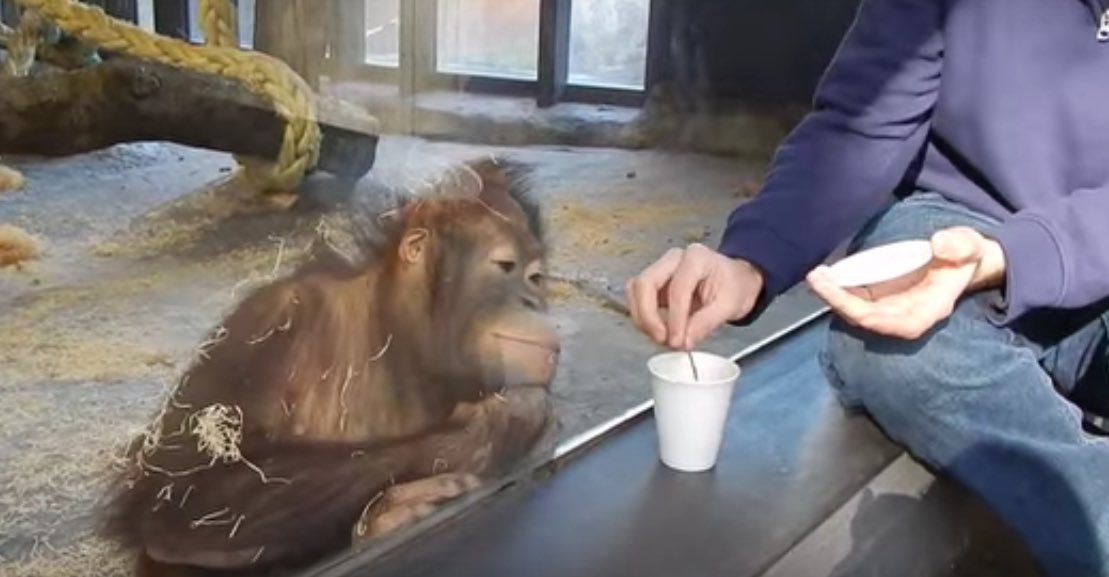 Oh, my heart! An amazing human/primate interaction, caught on video. Read the rest

Chimpanzees enjoy getting drunk on wine 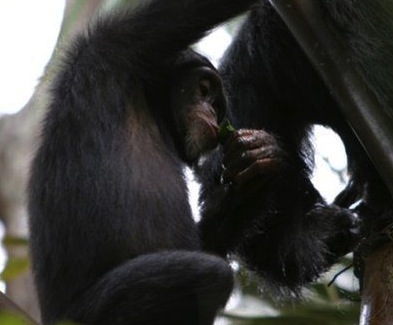 The chimps used drinking tools called leaf sponges - handfuls of leaves that they chew and crush into absorbent sponges, dip into the liquid and suck out the contents.

To work out the extent of the animals' indulging, the scientists measured the alcohol content of the wine in the containers and filmed the chimps' "drinking sessions".

The research team, led by Dr Kimberley Hockings from Oxford Brookes University and the Centre for Research in Anthropology in Portugal, worked out that the sap was about 3% alcohol by volume.

"Some individuals were estimated to have consumed about 85ml of alcohol," she said, "the equivalent to 8.5 UK units [approximately equal to a bottle of wine]".

"[They] displayed behavioural signs of inebriation, including falling asleep shortly after drinking.

Women, sex, and monkeys: what primatology can teach us about female desire

"With primatology, science has refused to see that females are the aggressors, the rulers, the initiators of sex. For so long, almost to a humorous extent, we have looked right past the truth; which is that the females are leaving their young, they're objectifying their mates, they're the agents of desire. The psychologist had to keep getting rid of his male monkeys because the females got bored with them!" A snip from Zoe Williams's Guardian piece on Daniel Bergner, author of What Do Women Want?, a new book about female sexual desire. Read the rest

My new column for The New York Times Magazine involved some of the most emotionally intense reporting I've done in a while. It's all about a little-discussed genre of observation-based scientific papers, documenting what chimpanzees and bonobos (and, sometimes, other primates) do when confronted with death. These are difficult events for scientists to catch — they don't happen very often, and it's even less frequent that researchers happen to be right there to record and film the whole thing, especially in the wild. Because of that, scientists can't say a lot that's definitive about these behaviors. But they can tell you what they've seen. And what they've seen can be devastating.

Pansy was probably in her 50s when she died, which is pretty good for a chimpanzee. She passed in a way most of us would envy — peacefully, with her adult daughter, Rosie, and her best friend, Blossom, by her side. Thirty years earlier, Pansy and Blossom arrived together at the Blair Drummond Safari and Adventure Park near Stirling, Scotland. They raised their children together. Now, as Pansy struggled to breathe, Blossom held her hand and stroked it. When the scientists at the park realized Pansy’s death was imminent, they turned on video cameras, capturing intimate moments during her last hours as Blossom, Rosie and Blossom’s son, Chippy, groomed her and comforted her as she got weaker. After she passed, the chimps examined the body, inspecting Pansy’s mouth, pulling her arm and leaning their faces close to hers. Blossom sat by Pansy’s body through the night.

A brief history of space monkeys and spies

In the late 1950s, American scientists very publicly readied a crew of monkeys for a series of trips into Earth orbit and back. As far as the researchers knew, Project Discoverer was an actual, honest-to-Ike peaceful scientific program. Naturally, they were wrong about that. In reality, their work was part of an elaborate cover-up masking a spy satellite program. At The Primate Diaries, Eric Michael Johnson reports on some fascinating space history. Read the rest

Touched by a mountain gorilla

An amazing close encounter with wild mountain gorillas in Uganda.

Orangutan rescued from poaching, returned to wild, then shot 62 times by thrill-seeking villagers

A blind Sumatran orangutan named Leuser was poached, sold as a gift, rescueed by the Sumatran Orangutan Conservation Program, and returned to the wild. Then, villagers seeking entertainment shot him 62 times. He has been rescued again, and his story is told in photos here. Read the rest

Chimpanzee testing: the beginning of the end? (video)

For PBS NewsHour, Miles O'Brien reports on whether there are ever instances in which the scientific value of research should offset the moral cost of working with chimpanzees. The US government has moved to limit some of the research it funds with chimps in recent months. Medical experiments on chimps can be invasive: one animal may endure dozens of injections, blood samples and liver biopsies in her lifetime. But some scientists argue that this is the only way to advance medicine. MP3 and transcript here, along with video.

PHOTO: Miles O'Brien. "If they could talk, what would these residents of Chimp Haven tell us?"

Chimpanzee mother learns her infant has died Report: Scientific research on chimpanzees "unjustified," should be ... Astrochimp ad astra: 50th anniversary of Ham the chimpanzee's ... Do chimps grieve? Story Time: Jerry- The World's Most Human Chimp Young bonobo may be expressing symptoms of autism Read the rest

Jane Goodall made her second appearance on The Daily Show with Jon Stewart last night, and the first order of business was to make sure Jon Stewart remembered the proper chimp greeting. And then she talked about the new documentary from Disney, Chimpanzee. As you can imagine, all of this was fascinating and adorable.

[Video Link] I went to see the documentary Project Nim last night at the advice of a friend, and would like to recommend it to all who read Boing Boing. James Marsh (Man on Wire) directed. Be prepared to cry or require hugs afterwards. Above, the trailer. It's in theaters throughout the USA now.

I was talking about it with Google+ followers last night, and one shared this review which squares with my own reaction. You can watch the first 6 minutes of the film here. The film is based on Nim Chimpsky: The Chimp Who Would Be Human, by Elizabeth Hess, who consulted on the film.

Without spoiling too much, I'd just like to share that the most upbeat takeaways for me were: Deadheads really can be awesome people. And, chimps like weed. Read the rest