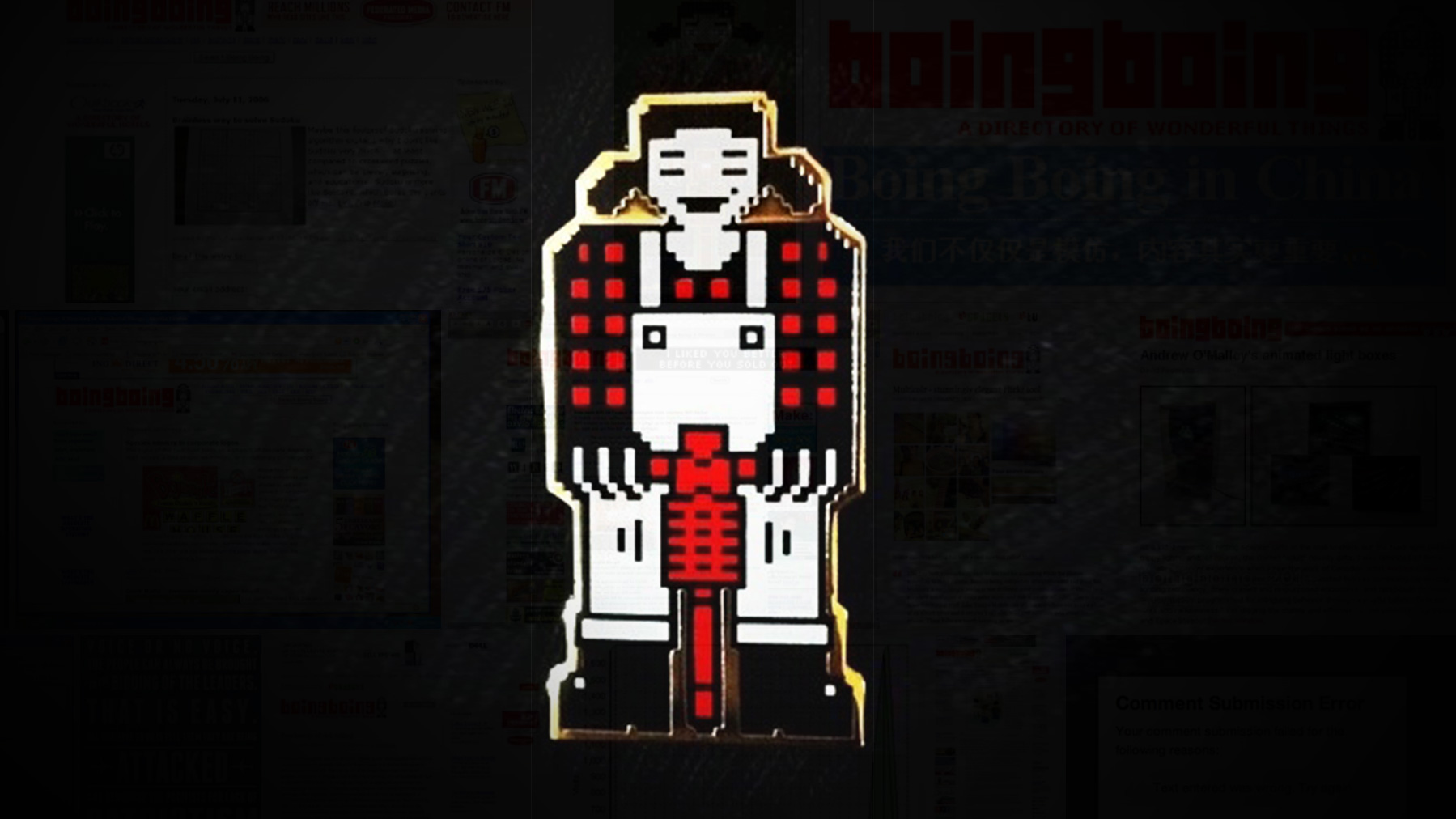 Twenty years ago today, Boing Boing became a blog. Mark Frauenfelder's first post linked to Street Tech, a now-dormant gadget blog. Now there are 160,000 more posts just like it and the impossible task of summarizing the best of them in yet another.

Founded as a print zine in 1988 by Mark and Carla Sinclair, Mark's personal retrospective posted earlier today is a must-read; following are a few of our greatest hits, proudest accomplishments, clickiest traffic monsters, and best features of all time.

Despite the tens of millions of words in our database – mostly wonderful things – it's oftentimes the shortest posts that get the most attention.

So it was with Xeni Jardin's Ralph Lauren opens new outlet store in the Uncanny Valley, a single-sentence reblog of a now-vanished post at another site highlighting the incompetently dysmorphic photomanipulations in one of the fashion house's ads.

Ralph Lauren tried to force us to remove the post, to no avail.

That wasn't our first rodeo, either. In 2008, were were sued by MagicJack, makers of a VoIP dongle, after criticizing its terms of service. We stood our ground and beat them in court. Ten years later, Playboy sued us for posting about someone else's uploaded cover collection, claiming that linking to things is a form of copyright infringement. We beat them too, with the help of able friends at the Electronic Frontier Foundation.

It's not all law and chaos, though.

Mark Frauenfelder says he's most proud of his two-part series on the fortified residential mailboxes of Los Angeles, Survival of the fittest mailbox and Fortified mailboxes, part 2. Readers, though, say his greatest gift to the world of letters is the gentlemen of Boing Boing.

A trilogy of Cory Doctorow's most incisive writing on technology, policy and freedom is found in Lockdown, based on his keynote speech to the Chaos Computer Congress in 2011, The Coming Civil War over General Purpose Computing, and Anodyne Anonymity. Also, would you just look at that banana. Furthermore, Christ, what an asshole.

David Pescovitz is a collector of unpopular culture with an affinity for haunted ontology, mall nostalgia and cryptids (more!, with a Grammy on the shelf for his part in reissuing the Voyager Golden Record.

But it's his touching obituary for Mark, his older brother, that will not be forgotten.

Xeni Jardin's posted countless articles about cutting-edge tech and light-hearted nods to the wonders of the web, and more seriously about politics, but it's her writing about cancer, hers and others', that sticks with readers. The Diagnosis; When life hands you cancer, make cancer-ade; Obamacare saved my life; Cancer and cannabis: How I learned to stop worrying and love medical marijuana; A medal for completing breast cancer treatment; and We should be worried that science has not yet brought us closer to understanding cancer.

Rob Beschizza's The Weird of Wendy Pini profiles one of America's most successful women cartoonists. His random generators include the Psygnosis Game Generator, the North Korean Press Release Generator and the Audiophile Hardware Review Generator. (For those who don't revile them, Rob's disturbing mouth-eyed politician shoops are collected in the gallery item Corinthian Leather). Fissure opens in Chess AI scene is a deep dive into a code-plagiarism scandal. He once reviewed a loaf of snot.

He eulogized his mother, Mandy Johnson, in 2016.

Did you know Boing Boing publisher Jason Weisberger was namechecked in a saucy romance novel? Bidet manufacturers looking for coverage should know that he's your man.

We published critical games writing under the aegis of Offworld, edited by Leigh Alexander: All the women I know in video games are tired and Why Silent Hill mattered. Zoë Quinn's call to creative arms, Punk Games, remains as relevant now as it was five years ago.

Laura Hudson's Women take a place at the pinball table is a deep look at a unique competetive area, complemented by her excellent reviews of games as different as Undertale — choose to kill monsters or understand them
— and Bloodborne — In Bloodborne's brutal world, I found myself.

Our longtime science editor Maggie Koerth's analysis of the Fukushima Daiichi nuclear disaster was featured in the anthology The Best Science Writing Online 2012. Don't miss her profile of James Watson, either.

Though known for chaingun blogging, we pioneered the trend toward Fancy Lookin' Features on the web, such as Maggie's Cassini Trip Reset, highlighting the astonishing imagery from NASA's probe, and Rob Beschizza's Friendly Darkness in the Palace of Utopian Fantasy, linking rare threads of modern and Victorian fantasy.

Here's just a few more of the nice features we've published over the years:

Other guests are too many to mention – there are more than five hundred contributors in our archives now – but they account for many of our finest posts. Among the best are Sawyer Rosenstein's Don't tell me the sky is the limit when there are footprints on the moon and the many annual iterations of David Ng and Ben Cohen's Halloween Candy Hierarchy.

Glenn Fleishman's Domo Arigato, Mr. Roboto is typeset in the then-new Google typeface it was about, and What it's like to be on Jeopardy is about his brief but impressive stint on the game show.

Carl Malamud is well-known for Liberating America's secret, for-pay laws, and we're immensely proud to have helped him make his stand.

We've also published loads of fiction over the years, including our own, such as Cory's By His Things Will You Know Him and The Man Who Sold The Moon, Jason's Kevin's List, and Rob's Mixtape of the Lost Decade, Such Bravery and Nomen Ludi.

Finally, here are our top traffic posts since we started counting: a master key for winning at blogging. But only if you have a time machine, because the web, as they say, is dead.

2. Rickrolling is sexist, racist and often transphobic in context

5. Campus rapist given lenient sentence to avoid "severe impact on him"

6. Man stole $122m from Facebook and Google by sending them random bills, which the companies dutifully paid

8. Trump is angry at NBC News for using this photo of him, so please don't use this enhanced, enlarged version of it for anything

On August 12, 1995, before Internet Archive or Google, Boing Boing conducted a charming interview with John Kricfalusi, creator of Ren & Stimpy. The Boing Boing Digital page still looks the way it did when readers read it on Explorer 1.0 or Netscape Navigator or what-not.

Quantcast just released statistics that confirm what we’ve known all along: Boing Boing readers are super-smart, ranking among the top 25 “highest percentage of web traffic with higher education.”