Starship Troopers may finally be getting the sequel we wanted 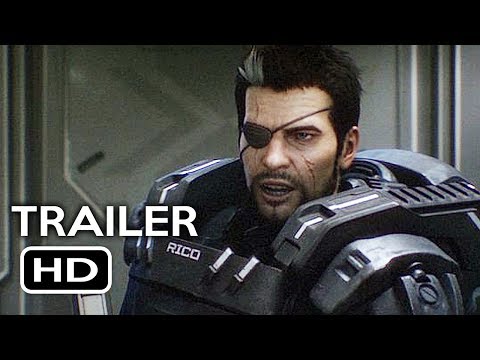 Starship Troopers, the 1997 disasterpiece, is one of the most fun bad Science Fiction films of all time! Until now, all the sequels were set up to fail.. behold Starship Troopers: Traitor of Mars.

Original Johnny Rico, Casper Van Dien is voicing the character again in this animated adventure. If you have seen the Starship Troopers animated series, it was clearly the best adaptation of Heinlein's books and far more fun than any of the sequel motion pictures. Also returning is Dina Meyer as Dizzy Flores.

Get ready to hunt bugs! Read the rest

John Scalzi's tremendous, Heinleinesque space opera Old Man's War has been greenlit by Paramount, and will be directed by Wolfgang Petersen and written by David Self. From my review:

Old Man's War is a cross between Heinlein's Starship Troopers and Haldeman's Forever War -- a raunchy, action-packed, thought-provoking book about galactic-scale warfare where lightspeed lag and distant, unimaginable alien technology are central to the story.

In Old Man's War, senior citizens can enlist in the space army, and when they do, they are taken away and rejuvenated, using secret technology, given a turn in battle, and the survivors are retired to a distant world, never to see the Earth again. For a certain kind of person, this is infinitely preferable to certain senescence and death, and that's the sort of person that fills the pages of Old Man's War.

The first volume of William H Patterson's enormous Robert A. Heinlein: In Dialogue with His Century is out. It's the first authorized biography of the sf writer who popularized at least three important motifs of the 20th century (polyamory, private space travel and libertarianism) and redefined the field of science fiction with a series of novels, stories and essays that are usually brilliant but sometimes self-indulgent, sometimes offensive in their treatment of race and gender, and always provocative and generally sneaky.

The best review I've read of this book so far comes from John Clute, one of the field's great scholars and critical writers, who devoted his June column in Strange Horizons to discussing Heinlein's work and (flatteringly enough) comparing it to the whys and hows of my own work. I recommend you read Clute's piece now, but for those of you without the time to follow the link, I'll sum up some of the bones of Clute's essay:

Heinlein was notoriously recalcitrant about his early life and the two wives he was married to before his epic marriage to Virginia Heinlein. He repeatedly burned correspondence and other writings that related to that period. Clute suggests that this is partly driven by Heinlein's desire to be Robert A Heinlein, titan of the field, without having to cope with his youthful embarrassments. It's a good bet -- lots of the stuff that drives young people to write science fiction also makes them a pain in the ass to be around until they work some of the kinks out of their system (I wholeheartedly include myself in this generalization). Read the rest

Over on Tor.com, senior editor Patrick Nielsen Hayden has some notes on the upcoming monster authorized Heinlein biography, whose first volume, Robert A. Heinlein: In Dialogue with His Century: Volume 1 (1907-1948): Learning Curve goes on sale on August 17th. I've been ploughing through my advance copy as quickly as I can. It's exhaustive and often exhilarating, and rewards close attention and perseverance, as when twenty pages of close detail on life in the US Navy in the 1920s turns out to be scene-setting for an erotic account of Heinlein's time among the free-love set in Greenwich Village while on shore leave.

On August 17, Tor Books will publish the first half of William H. Patterson's much-anticipated two-volume authorized biography of Robert A. Heinlein, Robert A. Heinlein In Dialogue with His Century: Volume I, Learning Curve, 1907-1948. In commemoration of this, Tor editor Stacy Hague-Hill has asked several of the great and the good of modern SF to identify their own favorite Heinlein novel and explain why. I've read all the pieces she got back, and they may intrigue and surprise you. They're going up on the Tor/Forge blog, one a week, beginning with David Brin's.

The Heinlein Biography Approacheth: An Announcement, some Pointers, and a digressive Disquisition on the Nuanced Differences between two Web Sites sharing in common a certain Widely-Recognized Brand